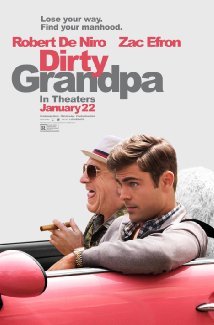 DIRTY GRANDPA is a vile, unfunny comedy starring Robert De Niro. He plays a recently widowed man who tricks his lawyer grandson into driving them from New York to Florida. The grandson, played by Zac Efron, discovers it’s a ruse so his grandfather can cavort with Spring Break partygoers, including getting drunk and doing drugs. In Florida, the grandfather meets a college senior, who throws herself at him. The movie tries to mine laughs out of a party scene where the lawyer drinks to excess and accidentally smokes crack after a drug dealer tricks him into trying it. In the morning, he wakes up almost totally naked on the beach.

(PaPaPa, HoHo, PCPC, C, LLL, VV, SSS, NNN, AAA, DDD, MMM) Very strong pagan worldview about a recently widowed man cavorting in Florida on Spring Break with his grandson, title character frequently and crudely insults African American homosexual but then defends him in politically correct fashion and with his fists when other African Americans do the same, plus Christian priest at funeral and a baptism scene with title character’s new baby and young wife; at least 175 obscenities (including many “f” words and often used for lewd, disgusting sexual references) and 10 profanities; grandpa keeps hitting his grandson in the groin with his hand and golf clubs for crude humor, mock hold up with gun fired, high speed chase with police, man knocked down by air gun, and grandpa punches out a group of straight black men who taunt and threaten a black homosexual male; very strong sexual content includes depicted sex between old man and young college co-ed, who get married later, depicted self abuse, references to viewing pornography, implied pedophilia with a young boy turns out to be a misunderstanding, and boy’s father knocks man down after seeing a situation and getting the wrong idea, and numerous lewd, disgusting verbal references, including crude references to homosexuality and sodomy; images of male organs, upper female nudity, partial full female nudity, and rear male nudity; lots of alcohol use and abuse, drunkenness, passing out and waking up on a beach, man puts prescription pill into his drink, drinking while driving, guzzling beer, etc.; smoking cigars and many references to drugs, including Ecstasy, marijuana, meth, crack, heroin, and positive portrayal of a drug dealer; and very strong miscellaneous immorality includes lying, deception, insults, and humiliation.

DIRTY GRANDPA is an utterly vile, unfunny comedy where a young lawyer is tricked by his crude grandpa to drive him from New York to Florida after his grandmother dies, only to find his grandpa only wanted to stop in Daytona Beach for Spring Break to be with young college girls. DIRTY GRANDPA has a strong pagan worldview with strong homosexual references, substance abuse, foul language, and other extremely crude content.

The movie’s story follows Jason Kelly (Zac Efron), a driven and ambitious young lawyer about to get married in a week to a stunning woman. When Jason’s sickly grandma dies, her husband, his grandpa, Dick (Robert De Niro), reappears at her funeral. Dick tricks Jason into driving him down to Spring Break in Florida so the grandpa can have sex with a new woman after 40 years of monogamy and 15 years without any sex at all.

This crass notion already is offensive, but it’s just the tip of the iceberg for the movie, which sinks even lower with a crude comic sequence about a case of mistaken, implied pedophilia. The movie also tries to mine laughs out of a party scene where the lawyer drinks to excess and accidentally smokes crack after a drug dealer tricks him into trying it.

Along the way, Grandpa spouts racial, sexist, misogynistic, and anti-homosexual insults at other characters, only to suddenly scold and beat up a gang of straight black men trying to injure and insult a homosexual black man. This lapse of logic is confounding, as Grandpa literally mocks the homosexual man a minute or two before saving his life.