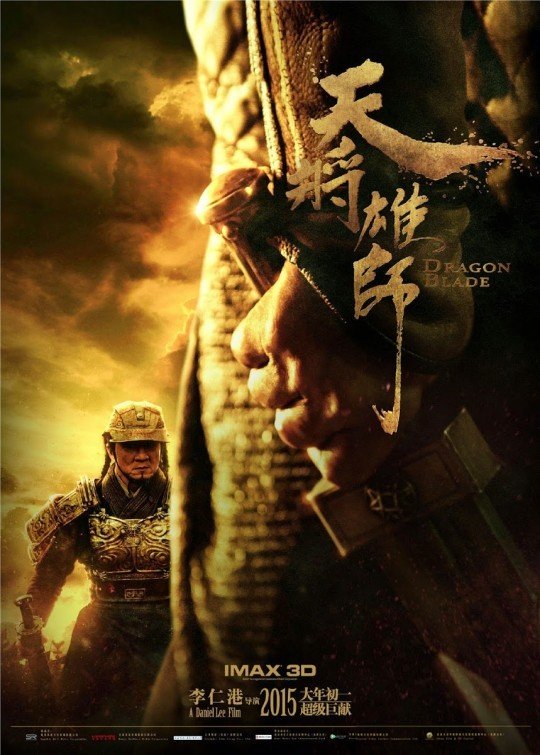 DRAGON BLADE is an action adventure movie starring Jackie Chan. Set in 50 BC, the main story finds an elite legion of banished Roman soldiers traveling along the famous Silk Road trade route to China. Their leader, General Lucius, becomes a trusted friend of Huo An, commander of the Silk Road Protection Squad. The Roman troops are protecting a Roman consul’s young son. The boy’s older brother, Tiberius, murdered their father and blinded the boy’s eyes with poison. Tiberius is leading several legions to take control of the Silk Road. They’re heading toward the city where Lucius and his men have taken refuge with Huo An, An’s Chinese troops and soldiers representing the other 35 nations along the Silk Road. DRAGON BLADE is truly epic, but it’s sometimes a little hokey and awkward. The movie’s melodramatic scenes take away from its power and may elicit unintentional laughs. DRAGON BLADE promotes a Romantic view of international brotherhood. Within this theme, there’s a strong moral emphasis on honor, duty, loyalty, chivalry, and peace. DRAGON BLADE is a little bloody at times. So, extreme caution is advised.

(Ro, BB, AC, P, VVV, S, NN, A, MM). Light Romantic worldview promoting international brotherhood and peaceful coexistence as opposed to war, with strong moral elements extolling honor, duty, loyalty, hospitality, chivalry, mutual respect, peace, and fighting despotism, tyranny and selfish greed, with some light patriotic elements; some extreme bloody violence and strong action violence includes ancient armies wage war against one another, soldiers shot with arrows, man tied up to wooden beam and has bloody wounds implying torture, much swordfighting, horses in battle, fighting, combat, men trapped and charge their way out, woman killed by arrows, villain kills his father, and it’s implied that a man poisons his young brother’s eyes to blind him and ensure he can never inherit their father’s position as a Roman consul; no sex but one woman falls in love with man who turns out to be loyal to his wife, but other woman still loves him; image of partial rear female nudity in one scene; alcohol use; no smoking or drugs; and, villain is selfish and cruel and ambitious, betrayal.

DRAGON BLADE is an action adventure movie starring Jackie Chan about an international Chinese army teaming up with a banished Roman legion to fight a corrupt Roman general and his army trying to take control the Silk Road trade route from East to West. Sometimes hokey, DRAGON BLADE is also a little bloody at times, so it warrants strong caution for sensitive moviegoers. Set in 50 BC, the main story opens with an elite legion of banished Roman soldiers, led by General Lucius, arriving at the city walls of Wild Geese Gate that guard the Silk Road leading to China. Falsely accused of treason, the commander of the Silk Road Protection Squad, named Huo An, has taken temporary command of the city. When a sandstorm approaches, a compassionate Huo An opens the gate to General Lucius and his troops. In return, the Romans offer to use their building skills to help repair the city’s walls before an impossible deadline. Lucius, Huo An, the Romans, the Chinese, and the other foreign troops in the city become trusted friends. Huo An discovers that Lucius and his troops are protecting the life of Publius, the young son of a Roman consul, who was murdered by the boy’s older brother, Tiberius, who has also blinded the boy’s eyes with poison. Tiberius is leading several legions to take control of the Silk Road, and they are headed toward Wild Geese Gate. Everything ends in a huge battle. DRAGON BLADE has epic battles and epic drama, but it’s a little hokey and awkward at times despite some nice cinematography. For example, the Roman soldiers’ affection for the young blind boy comes across as a bit cloying. The movie’s melodramatic sequences take away from its power and may elicit unintentional laughs from some viewers. The main message of DRAGON BLADE promotes a Romantic view of international brotherhood. Within this theme, there’s an emphasis on honor, duty and loyalty. At one point, General Lucius and his men sing a song of patriotic loyalty and affection for their homeland, Italy and Rome, that moves Jackie Chan’s character and his character’s men. Eventually, of course, the good guys unite against the despotic, murderous, faithless, selfish Tiberius and his evil allies. At the end, even Tiberius’s own Roman soldiers are disgusted by his cruelty.