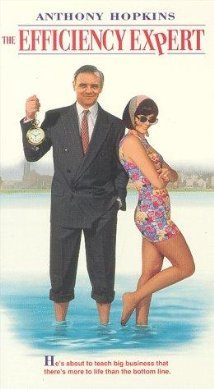 EFFICIENCY EXPERT is a gentle and subtle Australian film, a sort of Frank Capra tale told in whispers, which celebrates the virtues of kindness and generosity in a small factory. There are no car crashes, chases, murders, or mayhem, but plenty of sly humor and a wonderfully understated performance by Anthony Hopkins. Highly recommended.

(B, C, L) A positive portrayal of unselfishness and caring attitudes in a business setting marred by 3 mild obscenities and one profanity;

EFFICIENCY EXPERT is a quietly redemptive story. In this Australian production, Anthony Hopkins plays Wallace, an efficiency expert who helps the owners of large factories engineer huge layoffs. However, his next assignment is a small moccasin factory owned by Mr. Ball. Mr. Ball’s employees are a family, who love and care for one another. After a few days, Wallace concludes that a large number of workers must be let go, or the business will go belly up. However, he begins to have second thoughts as he experiences the devotion of Mr. Ball’s people to their boss, and the kindness they extend to him as well. Before long, Wallace repents, restores his marriage, breaks with his unscrupulous partner, and looks for creative ways to turn the company around.

EFFICIENCY EXPERT, named for the suburb of Melbourne, makes its points with subtlety, gentleness and sly humor. It is a Frank Capra tale told in whispers. Its opening exposition requires some patience, a commodity unfortunately in short supply among audiences jaded by shock, schlock and hyperkinetic editing. However, it deserves to be seen and supported for its warm embrace of the virtues of generosity and kindness. Seek it out, and bring a few friends.