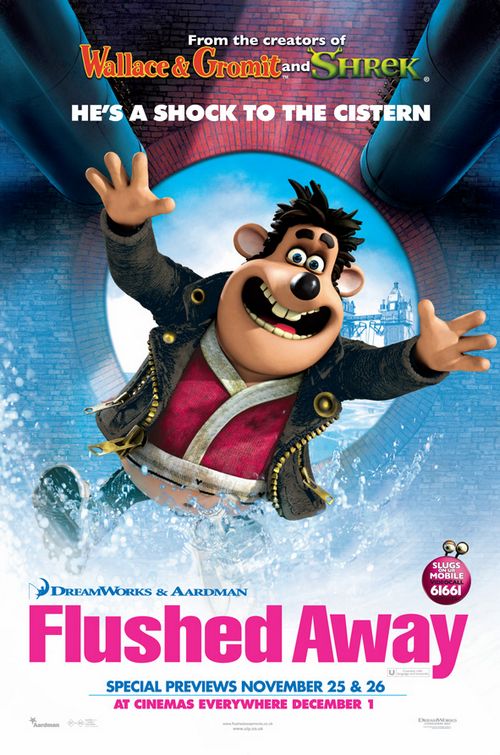 FLUSHED AWAY is a new animated comedy. Roddy is a pampered pet rodent who lives in an upscale section of London. He has all he needs, except a friend. Unexpectedly, an uncouth sewer rat, Sid, bursts through the kitchen sink and wreaks havoc on Roddy's ordered existence. In an attempt to get rid of Sid, Roddy is flushed down the toilet accidently into an underground rodent city. To get home, Roddy teams up with Rita, a street wise rat. Roddy wants to get home, and Rita just wants to care for her family. The villain, The Toad, is angry at all rodents. He uses two hench-rats, Spike and Whitney, to retrieve the Toad's secret weapon from Rita. Roddy and Rita face some hilarious adventures as Roddy tries to get home.

FLUSHED AWAY is laugh-out-loud funny at times and witty in other places. The movie has a strong moral worldview extolling friendship and commitment. There is even some overt Christian content in reference to prayer and the need for a Savior. FLUSHED AWAY contains some tense scenes, off-color humor and slapstick violence, however, so MOVIEGUIDE® recommends caution for younger children.

(BB, C, Pa, VV, M) Strong moral worldview extolling friendship and family as more important than creature comforts and upscale living, some redemptive and Christian elements such as a reference to prayer and a reference to a "Savior" coming from above to rescue the whole rodent world from destruction, with some pagan elements regarding self seeking behaviors that are rewarded; no foul language but two "idiot" words and one character is called stupid, plus some crude humor such as burping; light slapstick violence as flies are consumed by frogs (sometimes quite vocally), characters are “iced” or frozen, numerous hits to groin areas, “hit men” rats are chasing other rats throughout story, villainous rats fall on cement, and one character flushed down the "whirlpool" (a toilet) by uninvited visitor; no sex; no nudity; no alcohol; no smoking; and, lying and hatred rebuked, stealing characterized as okay at one point as long as it's for a good purpose and one bad character destroys property and expresses entitlement about doing it.

FLUSHED AWAY is DreamWorks’ newest animated comedy about an upscale rodent, Roddy, who is flushed down the toilet to an underground rat city. Produced by Aardman Animation from Great Britain, FLUSHED AWAY is the first time Aardman has used computer animation. This goes against their typical clay animation work in the WALLACE & GROMIT movies. The cartoon graphics in FLUSHED AWAY are bright and fun. The plot line is a bit weak, but there are some brilliant moments including screaming slug characters, who appear at all the right moments.

The story starts with Roddy, a pampered pet rodent living out a luxurious life in Kensington, an upscale area of London. He seems to be happy, despite his loneliness. Unexpectedly, a sewer rat explodes from the sink. Sid, the sewer rat, decides that it is his turn to enjoy the luxurious side of life. When Roddy tries to evict him by flushing him down the “whirlpool” (the toilet), Sid gets the upper hand and down Roddy goes to the sewers below.

Roddy is left to fend for himself in a strange new world for him. Roddy is directed to the only rodent who can help him get back home: Rita. Rita is a very streetwise scavenger rat and junk collector who is short on patience and on the run from some pesky hit rats. She scours the sewers of Ratropolis in her faithful boat, the Jammy Dodger. Roddy and Rita don’t get along right away but eventually decide to come together to help one another in their respective needs.

Roddy wants to get home, and Rita just wants to care for her family. The villain, The Toad, is angry at all rodents. He was once a favored pet of Prince Charles, but was replaced by a rodent and flushed into the sewers when Prince Charles was unaware. The Toad makes it his mission to rid the world of rodents. He uses two henchrats, Spike and Whitney, to retrieve the Toad’s secret weapon from Rita. These helpless henchman just can’t seem to do anything right.

The characters in FLUSHED AWAY are amusing, especially the screaming slugs who steal the show with their antics. The cast of voices, led by Hugh Jackman, Kate Winslet, Ian McKellen, Andy Serkis, and Bill Nighy, does a good job. Jean Reno is hilarious as the French mercenary, Le Frog.

FLUSHED AWAY is a story about friendship and the value of family over living a life of luxury. Thus, the movie extols our need to be in relationship with one another and, as God says in 1 Thessalonians 5:11, “Therefore encourage one another and build each other up.” Rita and Roddy’s relationship is one of redemption, as they are constantly forgiving one another and moving on in their relationship, encouraging and putting one another before themselves. In one scene, after lying, Roddy apologizes and shows remorse. Another value inherent in the story is the value of commitment and maintenance of that commitment, as Rita and Roddy find ways to work together to honor their word to one another, even when tempted otherwise. Some strong pro-Christian elements are identifiable in a reference to prayer and in a street doomsday character who makes reference to a Savior who will come from above and save the whole city from destruction.

FLUSHED AWAY contains some light off-color humor, belching and stapstick violence, including too many groin hits. One big moral issue with the movie is the message at one point that stealing is okay, as long as it serves a good purpose, like taking care of one’s family. Roddy promises to give Rita a family gem to help her provide a better quality of life for her family. This was not his to give, but the movie, which justifies this action, does not identify it as stealing. Also, Sid, the uninvited, ill-mannered sewer rat, destroys property and expresses entitlement to do so. Finally, FLUSHED AWAY, has some tense scenes where Rita and Roddy are being pursued or threatened. For these reasons, MOVIEGUIDE® recommends caution for younger children.

Rent or Buy FLUSHED AWAY: