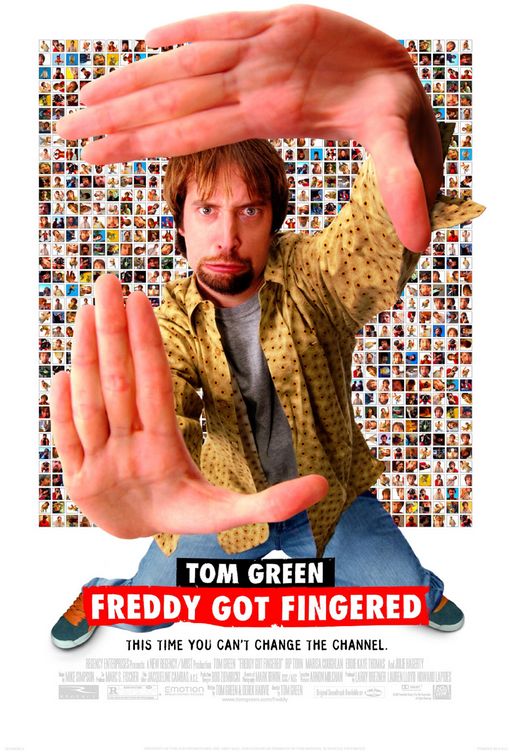 FREDDY GOT FINGERED is a sick, disgusting comedy starring iconoclastic MTV comic Tom Green, who plays a 28-year-old cartoonist who gets into constant battles with his father. Gordon Brody dreams of becoming a Hollywood animator, but his drawings haven’t even earned him a job sweeping floors in a studio. So, Gord moves back into his parents’ basement. His crazy antics keep angering his dad, until all-out war breaks out between them.

Among the irreverent tidbits in FREDDY GOT FINGERED are biting a newborn baby’s umbilical cord in two and swinging the baby around by the cord. Green also indulges in acts of bestiality and sado-masochistic beatings. Furthermore, the sexuality between him and his girlfriend displays a homosexual subtext which, of course, shows a phobia of being intimate with the opposite sex as well as a theophobic attitude toward God. Such cinematic crud may be a self-indulgent piece of trash, but it’s extremely cheap to make and therefore may give a nice profit to money-hungry producers and movie financiers, but Jesus says in Mark 8:36, “What good is it for a man to gain the whole world, yet forfeit his soul?

If you thought that juvenile numskull comedies couldn’t get any worse than last year’s SCARY MOVIE or this year’s TOMCATS, then think again because MTV comedian Tom Green’s FREDDY GOT FINGERED gives them a good run for their money. It is one of the most obnoxious, disgusting, self-indulgent movies ever conceived. The fact that it was filmed at all shows the depths to which American culture, including the body politic, has sank. If the freedom to make such a movie is the kind of “freedom” that the liberals really think human beings need, then God help us all. This generation might as well shuck everything and tell the people who founded this country, “It was a nice experiment, boys, but it just didn’t work out. So, goodnight America!”

The story to FREDDY GOT FINGERED, if you can call it that, is about 28-year-old Gordon Brody, a would be cartoonist and animator who still lives at home with his parents, played by acclaimed actor Rip Torn of TV’s LARRY SANDERS SHOW and Julie Hagerty of the original AIRPLANE. Gord’s father can’t understand why his son prefers wasting his time making juvenile comic drawings. He also can’t understand why Gord’s wild imagination drives him to do crazy, childish things like pretend he’s a scuba diver hunting for treasure with the shower running. Gord, however, won’t give up his desire to be an animator or his goofy daydreams.

Gord gets advice from the owner of an animation studio in Hollywood. The man tells him to concentrate on creating funny stories for his drawings, so Gordon returns to his parents’ basement in Portland, Ore. Back home, Gord finds a nymphomaniac girlfriend in a wheelchair and gets into numerous arguments with his father. His crazy antics keep angering his dad, until all-out war breaks out between them.

Pretending to be a scuba diver in the shower is the least crazy and obnoxious part of Tom Green’s behavior in this awful movie. Among the irreverent tidbits are biting a newborn baby’s umbilical cord in two and swinging the baby around by the cord. Green also indulges in acts of bestiality with a horse and an elephant as well as sado-masochistic beatings with his girlfriend. Details of all his disgusting behavior would be improper and not all that enlightening. The rest of the movie, however, contains plenty of strong foul language and a subplot that involves a false charge of homosexual pedophilia.

Maybe audiences should just get used to these kinds of degenerate, R-rated numskull movies. Such cinematic crud may be self-indulgent pieces of trash, but they’re extremely cheap to make and therefore may give a nice profit to money-hungry producers and movie financiers. But, Jesus says in Mark 8:36, “What good is it for a man to gain the whole world, yet forfeit his soul?” Also, statistics show that family-friendly movies with good moral values, including positive Christian and redemptive content, can make just as much money, if not more, than filthy trash like FREDDY GOT FINGERED. Only by supporting organizations and activities like those of MOVIEGUIDE® and the Christian Film & Television Commission can you stem this tide of degradation sweeping the nation.