"The Brilliant Minds Behind the NASA Space Program" 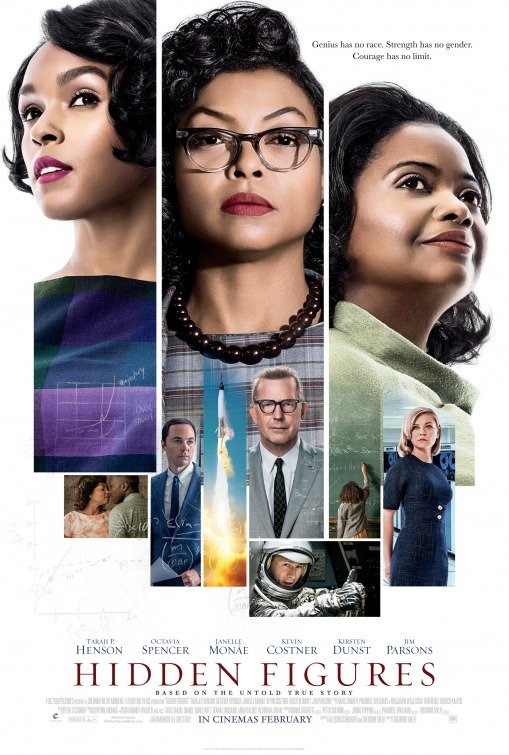 HIDDEN FIGURES is a little known story, but one that honors three women who served their country in amazing ways. The three lead actresses powerfully command the screen with grace. The movie encourages a positive moral perspective supporting our God-given liberty and basic civil rights. It also rejects violence. Even in opposition, the women love their country and their jobs. They refuse to let their dignity be taken away, but they prove themselves by responding in a Christian manner. Regrettably, HIDDEN FIGURES has multiple light obscenities some political correctness and one strong profanity. So, MOVIEGUIDE® advises caution for older children.

(BBB, CC, PP, PC, LL, AA, M) Very strong moral, biblical, pro-marriage, pro-family worldview exemplifying grace, standing for one’s rights and dignity, and responding with patience instead of violence, marriage, family, with strong Christian elements positively portraying faith, prayer, multiple church services, woman says their situation is a “God ordained miracle” and “thank you Jesus,” and a character says “godspeed”, plus strong patriotic elements of serving one’s country for scientific advancement and fighting for liberty and rights, with some politically correct dialogue; 18 obscenities (most “d” and “H” words) and three profanities (one strong misuse of Jesus’ name), and woman’s feet are seen as she’s in the bathroom stall; no violence; no sexual content, but married woman ogles men in two situations; no nudity; light drinking and women joke that their friend is drunk; no smoking or drugs; and, many situations of racism and prejudice.

HIDDEN FIGURES is an engaging, encouraging, uplifting movie about three African-American women in the 1960s, who contributed to the NASA program during the Space Race with Russia.

The story focuses on Katherine Goble before she married and became Katherine Johnson. Katherine has a brilliant mind for numbers. Even as a child, her teachers saw so much potential in her that they pitched in money to help her parents get her to an advanced school.

As an adult, Katherine (Taraji Henson) is widowed with three daughters. She works a mathematics computer at NASA in the days before they had mechanical computers to compute the numbers. Katherine works in a computer department comprised of “colored people” in the age of segregation. Two of Katherine’s colleagues include Dorothy Vaughan (Octavia Spencer), an unofficial supervisor of the computers, and Mary Jackson (Janelle Monae), a mathematician with hopes of becoming the first African-American female engineer at NASA.

Katherine is asked to be the computer underneath Al Harrison, director of the Space Task Group in charge of beating Russia to get the first man into orbit. Being the first African-American woman to have that sort of clearance, Katherine is met with resistance from the other scientists. At times, she’s asked to check the math on documents that are half redacted. Also, even going to the bathroom is a chore because the closest ladies room for someone with her skin is half a mile away.

Regardless, Katherine proves herself incredibly valuable with persistent wit, strength and class. Eventually, she’s asked to help come up with the calculations to send Astronaut John Glenn into space, orbit around the earth and come back safely.

HIDDEN FIGURES is a little known story, but one that honors three women who served their country in amazing ways. The three lead actresses powerfully command the screen with grace. Katherine is especially dynamic in her desire to work hard at her job, raise her three children, and court a man interested in marrying her. The movie is a bit long with two premises and has a few false endings, but it manages to entertain even in these moments.

Positively, the movie encourages a strong moral perspective supporting our God-given liberty and basic civil rights. At one point, Mary Jackson’s husband says that freedom must be taken and “civil rights isn’t always civil,” but she amply rebukes him, and eventually he apologizes for not believing in her. Later, Dorothy and her two young sons are kicked out of a library for whites only. Going back home on the bus, she tells her sons, “If you act right, you are right.” Even in opposition, the women love their country and their jobs. They refuse to let their dignity be taken away, but they prove themselves the better people by responding in a Christian manner. Katherine also attends church, and her family prays over their meal in the name of Jesus.

Regrettably, there are multiple light obscenities, some politically correct content and one very unfortunate misuse of Jesus name. Because of this, caution is advised for older children for HIDDEN FIGURES.