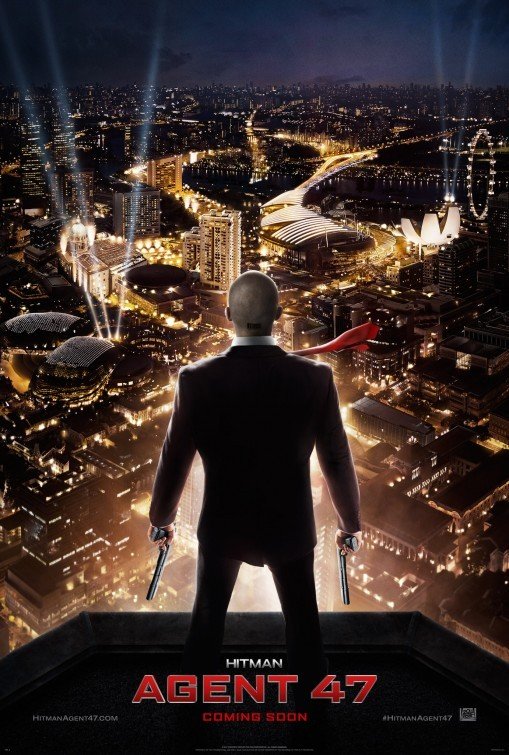 In HITMAN: AGENT 47, Syndicate International is trying to locate the missing Dr. Litvenko, who devised a secretive government project to genetically engineer human assassins incapable of feeling fear, pain or love. Agent 47, a product of the program, has been ordered to kill the doctor and his grown daughter, Katia. However, he chooses to save Katia, hoping to end the agent program. While they're on the hunt for Katia’s father, so is another genetically engineered agent. The future of the human race depends on who gets to Katia’s father first.

HITMAN: AGENT 47 is flashy and action-packed, but deficient on story and substance. Nonverbal action sequences likely take up two-thirds of the movie with dialogue serving to advance the story only enough to get to the next round of killing and car chases. Add in some James Bond type music, overdone computer graphics and constant violence, and you have a mediocre action flick. Underneath it all is the plot that humans have been created in a lab, devoid of a conscience. However, the protagonists in HITMAN: AGENT 47 ultimately make ethical decisions.

(HH, AcapAcap, B, O, LL, VVV, N, A) Strong humanist worldview set in a world devoid of the notion of God, with humans seen as creators of human beings and humans are engineered to ignore morals and ethics by an evil corporation trying to take world power, but protagonist has regained his conscience and is trying to stop the assassin program from being reconstituted, plus woman has genetically engineered occult powers with an enhanced sense of her environment and is able to see a few seconds into the future; 18 obscenities and profanities (including some “f” words and two strong profanities); very strong violence includes at least 100 people are killed, most deaths occur from gunshots that are point-blank, blood and gunshot wounds are openly shown, blood splatters from body parts as people are shot, a lot of hand-to-hand combat with kicks and punches, knives are drawn on people in a couple of scenes, a woman's head gets smashed into a machine, several people are sucked into a turbine engine and chopped to pieces, a man is thrown into a grinding machine and his blood slides down the machine profusely, a man physically abuses a woman by hitting her head against a wall, scientist inject drugs through an IV that creates intense pain in patient, barcodes are branded on the back of heads, several cars blow up with people in them, a helicopter blows up with people in it, a helicopter crashes into a building full of people, a car wrecks and injures people inside, a sniper kills several drivers with gunshots to the head; no sex; brief shot of a woman's naked back while she's in the shower; alcoholic drinks are served in a brief scene; cigarette in one scene and woman takes a prescription pill; and, a large corporation wants to restart a genetically engineered assassin program to gain power in the world.

In HITMAN: AGENT 47, two genetically engineered killers team up to look for their missing creator and try to stop an international corporation from continuing the assassin program. Based on the popular Hitman video game, this movie is predicated on graphic violence and puts little weight on the story.

Syndicate International is on a mission to locate the missing Dr. Litvenko who devised a secretive government project in the 1960s to genetically engineer human assassins incapable of feeling fear, pain and love. The lack of these abilities made them the perfect killing machines, largely invincible and unquestioning of ethics.

Agent 47, a product of Dr. Litvenko’s program has been given orders to kill both the doctor and his now-grown daughter, Katia. However, he’s learned to think for himself and proves he has some modicum of ethics when he reveals that his mission is to save Katia and keep Syndicate from reinstating the agent program.

Katia is on a search for her father as well, having been left behind as a small girl when he went into hiding to escape those who wanted to destroy his program. She has an enhanced sense of her environment, able to see a few seconds into the future and anticipate events before they happen. Little does she know that her father engineered her survival instincts so that she would be able to escape those who want to kill her.

Katia senses Agent 47 closing in on her and tries to flee from him, only to be stopped by a mysterious man named John Smith who claims he’s there to protect her. Together, the two manage to get away from the would-be assassin and take off for Berlin to try and find her father.

In Berlin, Agent 47 catches up to them, and this time they’re not so lucky. John Smith is quickly killed, and Katia is kidnapped. Instead of killing her, 47 explains he wants to help her. He has knowledge of her past, her father and her abilities. Katia reluctantly trusts him after finding out that they were part of the same program as children.

Using maps and clues from her father’s life, Katia manages to pinpoint her father’s location in Singapore. When the two arrive in Asia, John Smith unexpectedly shows up again. It turns out that he’s an employee for Syndicate International and also one of the genetically engineered agents with teflon skin resistant to injury. The three agents all want the same thing: Dr. Litvenko. The fate of the human race depends on who gets to him first.

HITMAN: AGENT 47 is flashy and action-packed, but it’s deficient on story and substance. Based on the popular Hitman video game, and the second movie in the series, it’s more concerned with living up to gamer’s expectations than trying to go beyond the surface of shoot-em-up recreation. Nonverbal action sequences likely take up two-thirds of the movie with dialogue serving to advance the story only enough to get to the next round of killing and car chases. As far as cars go, Audi gets abundant product placement as its top of the line vehicles perform stunts defying the laws of physics. Add in some James Bond-esque music and overdone computer graphics, and you have a mediocre action flick.

The very gimmick of the movie is violent: an assassin has been engineered to kill. Upwards of 40 men are brutally shot in the first five minutes and the death toll nearly triples by the end. The filmmakers make no effort to cut away from any of the violence. It’s all openly shown, from people being shot in the head to being sucked into turbine engines. Underneath it all is the plot that humans have been created in a lab, devoid of a conscience. This removes any notion of God, morals, or ethics. However, ethics do win out in the end as the agents realize they have a choice to do the right thing and go against their programming.