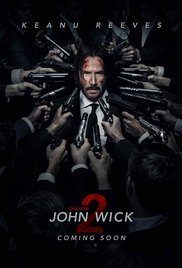 JOHN WICK: CHAPTER 2 is a sequel to the hit action-thriller JOHN WICK, starring Keanu Reeves as a legendary hitman trying to retire from his former lifestyle. CHAPTER 2 picks up just as Wick is finishing the events of the last movie, declaring peace with the Russian mob. As soon as he gets home, however, an old associate, Santino, cashes in a favor from John Wick that Wick isn’t allowed to reject, according to assassin society rules. After Wick performs the job, however, Santino betrays him and sends all the top assassins after Wick with a $7 million bounty on his head.

Keanu Reeves brings a rare intensity to the action in JOHN WICK: CHAPTER 2. The movie’s well-executed direction, pulsing music and eye-popping cinematography make for an exciting thriller. Happily, CHAPTER 2 has some improvements from its predecessor, including less vengeance and less foul language. However, the violence is over-the-top and brutal, and there’s brief nudity in one scene. Ultimately, the worldview is still lawless and pagan, despite the movie’s improvements. Media-wise moviegoers will want to avoid JOHN WICK: CHAPTER 2.

(PaPa, FR, B, C, LL, VVV, NN, A, MM) Strong, somewhat mixed pagan worldview with hyper-violence, lawlessness, disregard for innocent bystanders, and no show of compassion or grace, a giant Buddha statue is shown, some light moral elements of man who defends himself and tries to leave his violent former life behind, and some brief Christian references include a man has a cross tattoo on his back and a sign on the wall reads “Jesus Saves”; 10 obscenities (including six “f” words) and two profanities; excessive violence with a high body count, intense car chases, crashes, explosions, people hit by cars, henchmen are shot, stabbed and strangled by the dozens, two men are stabbed in the head with a pencil, a woman slits her wrists in a bathtub, man’s bones and limbs are broken; no sexual content; long shot of upper female nudity when middle-aged woman undresses to step into a bathtub, and she’s seen from the front from far off; some drinking; no smoking or drug use; and, some vengeance, suicide and disregard for human life.

JOHN WICK: CHAPTER 2 is a sequel to the surprising hit action-thriller JOHN WICK, starring Keanu Reeves about a legendary hitman trying to retire from his former lifestyle. In the first movie, John Wick was retired and grieving the loss of his wife, who died from an illness. When some Russian gangsters pick a fight with Wick and kill his dog, John goes on a revenge killing spree and takes out the entire Russian mob.

CHAPTER 2 picks up just as Wick is finishing up the events of the last movie and declaring peace with the Russians. As soon as he gets home, however, an old associate, Santino D’Antonio, shows up on his doorstep and presents John with a gold “marker.” The marker was what let Wick leave his life as an assassin, but Santino can cash it and request anything of John. He wants John Wick to kill his own sister, who inherited their father’s Italian crime syndicate. John Wick says he’s left that lifestyle and won’t do it. So, Santino angrily blows up Wick’s house.

Because one of the most sacred rules of this society of assassins is to honor a marker, Wick agrees to the assassination and heads to Rome to do it. However, in Rome, Santino double crosses Wick and puts a $7 million dollar bounty on his head. With all the assassins now after Wick, can he survive their assaults? Will he ever be able to get back to retirement?

The world and mythology surrounding the society of assassins expands greatly in JOHN WICK: CHAPTER 2. The world created is purposefully far-out enough that some of the dialogue and scenes that are on-the-nose play out for comedic effect quite well. Keanu Reeves brings a rare intensity to the action, and the well-executed direction, pulsing music and eye-popping cinematography make for an exciting thriller.

On the positive side, CHAPTER 2 has some improvements compared to its predecessor. While the killing in the first movie was mostly revenge, the violence in this one is primarily self-defense. John Wick legitimately wants to put his former life behind him, but gets forced back into its violent world. Also, there are a couple positive references to Christianity in the movie. Finally, CHAPTER 2 has significantly less foul language than the first movie.

Despite all this, however, the title hero still isn’t fighting for much. In fact, Wick shows little care for innocent bystanders when he fights with other assassins. Ultimately, therefore, the worldview in CHAPTER 2 is still lawless and pagan, even if it’s a little less objectionable than the first movie.

All in all, the violence is over-the-top and brutal, and there’s brief upper female nudity from afar when a woman steps into a bathtub. These elements, along with the mixed pagan worldview and several “f” words, eventually make JOHN WICK: CHAPTER 2 unacceptable viewing. Media-wise viewers will want to avoid this movie.