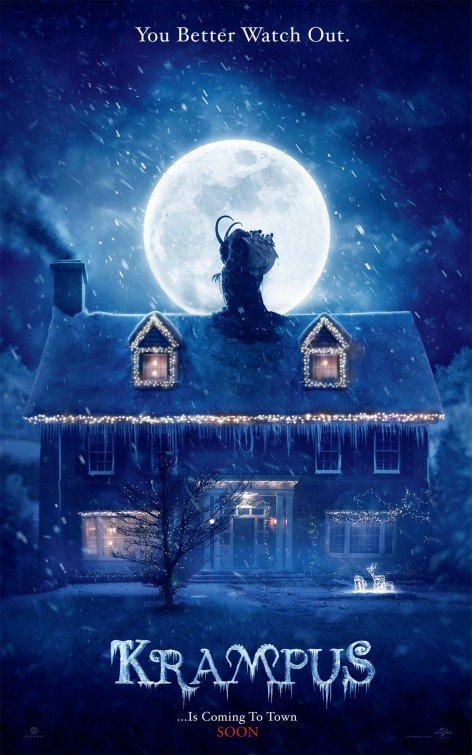 KRAMPUS is a Christmas horror comedy based on the Germanic folklore of a beast that punishes misbehaving children on Christmas. Max is a young boy trying to hold onto his belief in Santa and the true Christmas spirit. When the family’s loud, obnoxious relatives come to stay, Max is pushed to a breaking point where he gives up his belief in Santa and rips up his Christmas list letter. A dark storm suddenly overtakes the family’s home. Then, Krampus arrives to punish the family in scary, violent, deadly ways for causing Max to lose faith and hope.

KRAMPUS is hokey in both intentional and unintentional ways. The movie never truly becomes scary, but it’s not always funny either due to the story’s dark nature and the fact children are dying. The movie’s strongest moments are actually the heartwarming scenes of the family coming together, with even some nice parallels to Christian faith. Also, the violence is surprisingly subdued. However, there are still frightening scenes in KRAMPUS, some foul language and a Twilight Zone ending. This content warrants extreme caution overall.

(PaPaPa, CC, BB, OO, LLL, VV, A, DD, M) Very strong mixed pagan worldview with some Christian, redemptive, moral elements including a family learns to come together, love and sacrifice for one another, but they are also punished for making a boy lose faith in Santa Claus and hope, some Christian parallels to faith and many Christian symbols and references to the birth of Jesus, including a brief scene of a children’s movie where an elf recites Scripture and grandmother tells children, “It’s not what you do, but what you believe,” but with strong pagan elements revolving around German folklore that’s also strongly occult and includes a demonic kind of force and creatures, and the movie’s Twilight Zone ending has no real grace or mercy; 21 obscenities (including two “f” words) and five profanities; moderate violence with scary creatures, elves, and toys that come alive to try kill and kidnap the family, creature bites man on leg, and wound is gruesome, man shot in leg with nail gun, children are taken and killed; no sexual content; no nudity; light drinking and a reference to a hangover; no smoking but a reference to a marijuana bong; and, teasing, humiliation, and angry shoppers and consumerism are shown in opening sequence.

KRAMPUS is a Christmas horror-comedy based on the Germanic folklore of a beast that punishes misbehaving children on Christmas.

The movie opens with a slow motion sequence of angry Christmas shoppers fighting in a store. Cut to the Engel family. Max is a young boy desperately trying to hold onto his belief in Santa, but everyone around him makes fun of his beliefs. His one true encourager, other than his parents, is his German-speaking grandmother. Making matters worse, the family’s quiet Christmas is disrupted by loud rambunctious relatives who’ll be staying with them until the day after Christmas.

At dinner, two of Max’s tomboy cousins steal his letter to Santa and read it to everyone at the table, embarrassing and angering Max in the process. Max decides to rip up his letter and throw it out the window. Because those around him caused Max to lose faith, a dark snowstorm brews above the family’s home. At first, it just seems like a typical storm, but after the power shuts off and Max’s teenage sister Beth goes missing in the storm, the family discovers something dark and dangerous lurking outside.

Eventually, Max’s grandmother, Omi, explains her encounter with Krampus as a young girl and warns that no one is safe. She explains that One by one, Krampus, his elves and his deadly toys armed and alive begin taking out family members. Will anyone survive the wrath of Krampus?

KRAMPUS is hokey in both intentional and unintentional ways. The movie never truly becomes scary, but it’s not always funny either due to the dark nature of the plot and the fact that children are dying. The costumes of the elves are over the top and the deadly gingerbread cookies are comically absurd. This back and forth between horror and comedy makes it hard to feel any real jeopardy, especially when likable characters are killed very quickly into the movie.

The movie’s strongest moments are actually the heartwarming scenes of the family coming together and realizing they haven’t been as loving as they should have been. In one compelling scene, Omi explains to the children, “It’s not what you do, but what you believe.” That along with other discussions of belief have similarities to the Christian faith. In fact, KRAMPUS takes the theme of punishing individuals who cause young children to lose faith and give up hope in a direction reminiscent of Jesus Christ’s words in Mark 9:42. Also, Omi mentions that the true meaning of Christmas is giving and sacrifice. All this leads to a dramatic conclusion where different family members and, eventually, Max are willing to sacrifice themselves to save the family.

However, while Max’s sacrifice is redemptive, it’s not really rewarded, and Krampus ultimately offers neither grace nor mercy in a Twilight Zone ending. Also, no higher being intervenes to forgive the family before or during that ending. This is, of course, contrary to the Gospel. So, the movie’s similarities to a Christian worldview eventually become thin in the end. Ultimately, the movie’s folklore is more rooted in paganism, occultism and cynical nihilism than anything else, so it’s hard to give KRAMPUS completely positive credit, even though it tries very hard to be a morality tale.

The violence in KRAMPUS is surprisingly subdued. However, there are still scary scenes and some foul language (including a couple “f” words) that warrant extreme caution, plus the Twilight Zone ending.