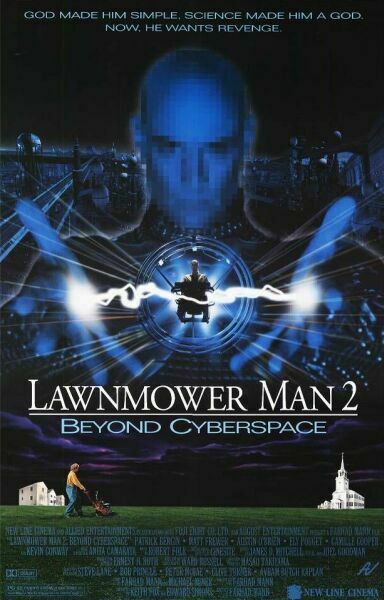 LAWNMOWER MAN 2 thrusts the original story ahead to a future of economic collapse. The character of Jobe assigns himself as the "new Messiah" by connecting himself to the world's computer systems. Although mild in most content aspects, a New Age worldview runs rampant throughout the story and is deceptively packaged as a solution to the dark realism of life.

LAWNMOWER MAN 2 sets the original story ahead to an unknown number of years in the city of Los Angeles, with streets walked by dismal meandering pedestrians. Technology and automobiles have advanced but still carry traces of the 20th century. The grim atmosphere is the result of some economic and societal depression, yet it is never known how this condition was reached. The experimental nature of Virtual Reality (in LAWNMOWER MAN) has now been far surpassed, and its use is as common as today’s real world television viewing. Jobe, the experimental human from the original story, has now assumed great power in Virtual Reality and assigns himself as the “new Messiah”. His goal is connecting and controlling the world’s computer systems with his mind.

Unfortunately, LAWNMOWER MAN 2 is another gloom-and-doom look at our future. Director Farhad Mann fills the screen with intriguing animation and photography, but fails to noticeably develop any human characters. The primary character became Virtual Reality itself. However, the real concern of this story is the deceptive way the New Age worldview is presented as a solution to the dark realism of life. One must be a very discerning viewer as they surf through this moderately violent and scary world of the future.