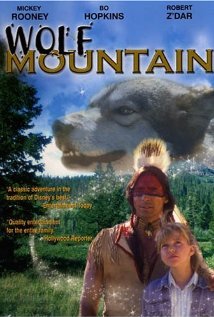 LEGEND OF WOLF MOUNTAIN is a patchwork quilt of New Age mysticism, psychic events and animism presented as environmental awareness for families. Fortunately, the movie's appeal and influence are greatly encumbered by a low budget, uneven acting, klunky story-telling, and gaping plot holes.

LEGEND OF WOLF MOUNTAIN is a so-called “family adventure” filled with spiritism, psychic events, and a recurrent New Age worldview communicated as environmentalism. The story begins as three bickering schoolmates, Kerrie, John and Casey, are hijacked by two escaped convicts. The crooks take the youth to Wolf Mountain. The crooks, named Jocko and Dewayne, are stereotypical caricatures. Jocko is relentlessly evil, and Dewayne adds comic relief as a dumb schmuck. Kerrie sees a wolf which transforms into the Indian warrior named Simcoe. Simcoe tells Kerrie she was the Guardian of the Mountain in her former life. To strengthen the pagan lie of reincarnation, Simcoe shows her visions of her past life among the local tribespeople. Eventually, Simcoe appears to everyone and dukes it out with Jocko. To wrap things up, the youngsters appear at the next school assembly to rehash Simcoe’s message that we are all “one with the Earth, which is our mother.”

Overall, LEGEND OF WOLF MOUNTAIN will scare young moviegoers out of their wits. Aside from the violence, the movie is tainted by occultic messages of reincarnation and spiritism, not to mention uneven acting and clunky storytelling.

Audience: Eight-year-olds and up RECOMMENDED AUDIENCE: No one