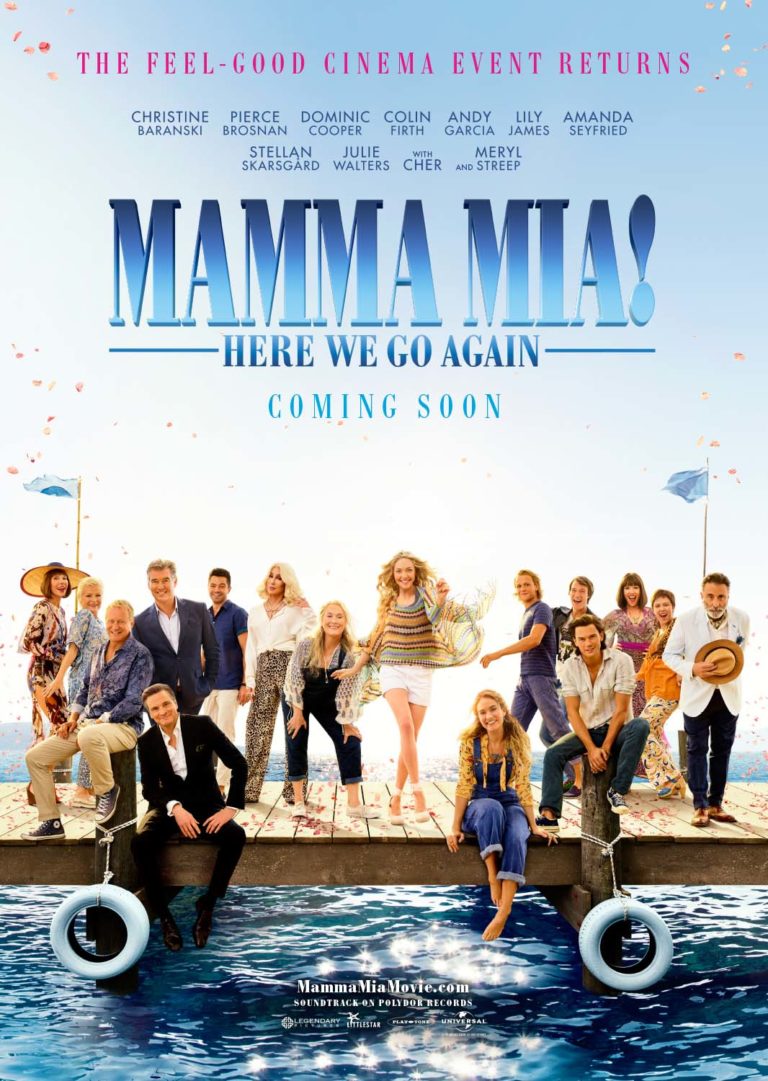 MAMMA MIA! HERE WE GO AGAIN is a musical sequel. Sophie remembers her late mother, Donna, as she rebuilds the hotel her mother ran. While Sophie rebuilds the hotel, her father tells stories about her mother. Donna was a free spirited, fun loving young woman who always had a dream to live in Greece. Once she graduates from Oxford, she takes steps to get to Greece. On the way there, she meets three young men. When a storm approaches both Donna and Sophie, the two women rethink the idea of living out their dreams.

MAMMA MIA! HERE WE GO AGAIN is a continuation of the musical MAMMA MIA. It has some positive elements to it, but is marred by a strong Romantic, immoral worldview and sexual innuendoes. As with the first MAMMA MIA, this one shows characters following their hearts and experiencing free love. On the positive side, the movie has some light Christian, redemptive content. For example, it contains a beautiful song about motherhood, which sees motherhood as a selfless act. The movie also has a beautiful baptism scene in a Christian church.

(RoRo, C, B, FR, S, N, Ho, L, M):
Dominant Worldview and Other Worldview Content/Elements:
Strong Romantic worldview about following your heart with few repercussions, main character sleeps with multiple men in a row (not shown but implied), multiple characters have children out of wedlock, and one character doesn’t know who her father is and calls three men her father, mitigated by some Christian, redemptive, moral, pro-life elements promoting becoming a selfless mother, movie ends in a church with crosses and stone glass windows of biblical scenes, and a beautiful baptism is performed, plus there’s one mention of the false theological notion of karma, and a young woman kisses her female teacher as a joke;
Foul Language:
Two light obscenities and three profanities (including one Jesus profanity);
Violence:
No violence;
Sex:
Young woman kisses female teacher as a joke, female character mentions her private parts, couple lies in bed, implied fornication, out of wedlock pregnancies, one song has sexual references, character cheats on his fiancé, and couple kisses in an alleyway;
Nudity:
Brief upper male nudity;
Alcohol Use:
Characters take shots of alcohol, but no drunkenness is shown;
Smoking and/or Drug Use and Abuse:
No smoking or drugs; and,
Miscellaneous Immorality:
Character misleads other characters to think he did something.

Meryl Streep’s character, Donna, has passed away, and it falls on her daughter, Sophie (Amanda Seyfried), to take care of her mother’s Greek island hotel. The musical begins in the present, one year after Donna has passed. Sophie has rebuilt her mother’s hotel and is getting ready for its grand reopening. As she looks at a picture of Donna with her stepfather, Sam (Pierce Bronson), the movie flashes back to 1979, where Donna’s story begins.

In 1979, Donna (Lily James) has just graduated as the valedictorian at Oxford. Donna is a young, energetic young woman who has two best friends, Tanya and Rosie, who have started a singing group called the “The Dynamos.” Donna reveals to her best friends that she has always dreamed about going to Greece. The day comes for Donna to head out on her adventure, with her first stop in Paris, where she meets Harry. Harry is a young man who’s a bit awkward and nerdy and instantly thinks he’s in love with Donna. Donna thinks Harry’s sweet, and the two of them get to know each other, but Donna is eager to go to Greece.

Missing the ferry to Greece, Donna sees a young sailor named Bill. Bill offers to take Donna there himself. The two of them sail away, and Bill tries to charm Donna, but she doesn’t go for it. Finally, they get to the spot Donna has been dreaming about, but there isn’t much there, so Bill is wary of dropping her off at the spot. He tells her he will be back to check on her in a couple weeks, after his big sailing race.

Donna explores the area and finds a beautiful dilapidated villa on the top of the hill. Flash forward to Sophia at the same villa, years later, showing around Tanya and Rosie. Tanya and Rosie are so happy to support Sophie during this time, after Donna’s death. They see what a beautiful job Sophie has done with the villa and the hotel.

Once again, the movie flashes back to when Donna is making her new life in Greece. Donna meets a young man named Sam, and both of them form a deep connection right away. In fact, Donna really believes she’s met someone she wants to be with long term.

Meanwhile, as Sophie tries to get everything organized for the hotel’s grand reopening, a terrible storm approaches that might destroy everything.

MAMMA MIA! HERE WE GO AGAIN is an entertaining musical. Overall, the movie is well made and truly feels like watching a musical onstage (which some people will appreciate even though stagy movies usually do not do well at the box office). Though this is the case, the modern-day storyline of Sophie rebuilding the hotel seems like it wasn’t thought out, whereas the flashbacks take up most of the movie and are more developed. Of course, the characters seem a bit cartoonish and cheesy at times. This makes the movie feel like a show. However, Lily James does a good job playing the likable, fun-loving Donna.

MAMMA MIA! HERE WE GO AGAIN has some positive elements to it, but it’s marred by sexual innuendoes and a Romantic worldview. As with the first movie, MAMMA MIA! HERE WE GO AGAIN has a Romantic worldview about following one’s heart and experiencing free love. The main character seems to be completely free-spirited and sleeps with multiple men in a row. Though the bedroom scenes aren’t shown, the audience gets the picture of what’s happening. As in the first movie, Sophie doesn’t know which of the three men is her father, and ultimately calls all of them her father.

On the positive side, the movie has some light Christian, redemptive content. For example, it contains a beautiful song about motherhood, which sees motherhood as a selfless act. MAMMA MIA! HERE WE GO AGAIN also has a beautiful baptism scene set in a Christian church.