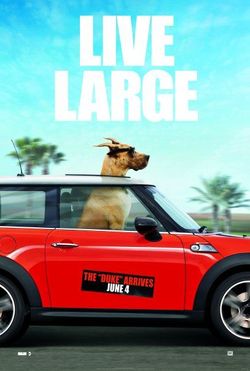 MARMADUKE opens with the lovable Great Dane, played by Owen Wilson, introducing his family. The family includes Dad Phil, Mother Debbie, teenage daughter Barbara, brother Brian, little Sarah, and Carlos the cat, Marmaduke’s “step-bro.” Phil moves Marmaduke, Carlos and the family from Kansas to Southern California, where Phil’s taken a job as the new marketing guru for an organic pet food company. Phil’s new boss insists on having meetings in a dog park. Marmaduke explains that a dog park is like high school for dogs. Marmaduke’s obsession with fitting with the other dogs leads to a conflict between Marmaduke and Phil.

Aided by its talented voice cast, MARMADUKE has a really clever, hilarious opening that sets the stage for the rest of the movie. The movie lags somewhat when it forgets Marmaduke’s family and concentrates too much on Marmaduke’s relationship with the other dogs, but the third act is exciting and heartwarming when Phil and Marmaduke’s lives are endangered. MARMADUKE has very brief foul language, some scatological humor about canine habits, and a couple jokes about dogs getting high on eating mushrooms and being tranquilized before airplane rides.

(BB, C, L, V, DD, M) Strong moral worldview with some light redemptive content reflecting Christian values stressing the importance of supporting and helping one’s family and friends, and standing up to bullies and restoring personal integrity, with many jokes comparing dog parks to high school for dogs, including a clique that eats mushrooms in the park and behaves like stoners, plus title character gets wrapped up in trying to be popular and lies and forgets his friends but learns his lesson and seeks forgiveness; one “My God” profanity and three uses of the word b-u-t-t, plus some scatological humors as dog urinates in man’s cup, dog urinates on couch, two jokes about family dog deliberately passing gas in master bedroom; some comic and action violence such as dog ejects cat from chair, dog chases cat and whips cat around on its tail, bigger dogs scare other dogs, dogs surf, running dog flips man twice, dogs chase each other and upset people on stage, dogs fall through sinkhole, and man and dog hang on for dear life in a flood at an aqueduct; no sex; no nudity; no alcohol; no smoking but jokes about a few dogs in dog park getting high by eating mushrooms growing near trees and drug joke about dog and cat getting tranquilized before riding in a plane; and, lying, dog holds wild party at house when family goes away for weekend, and father becomes absorbed in his job.

MARMADUKE follows in the wake of the success of such movies as ALVIN AND THE CHIPMUNKS, BEVERLY HILLS CHIHUAHUA and MARLEY AND ME. Based on the popular cartoon about the world’s most lovable Great Dane, MARMADUKE has a wonderful, hilarious opening that sets the stage for a heartwarming, exciting finish.

Phil moves Marmaduke, Carlos and the family from Kansas to Southern California, where he’s taken a job in Southern California as the new marketing guru for an organic pet food company. Don, Phil’s new boss, insists on having a business meeting in the dog park. Marmaduke explains that a dog park is like high school for dogs. Don’s collie, Jezebel, is the girlfriend of the leader of the snooty purebred dogs, Bosco, the group’s alpha male. The other dogs include the Jocks, who like to chase Frisbees, the Drama Geeks, who like to perform for their owners, and the stoner dogs, who eat mushrooms growing near trees. Because he’s not a purebred, Marmaduke finds himself stuck with the mixed breeds, the Mutts, led by Mazie, a Queensland Heller Mix.

Trying to fit in and get closer to Jezebel, Marmaduke uses Carlos to fake a fight with a cat. Eventually, Marmaduke succeeds in ousting Bosco from being the alpha dog, but he throws a wild party for the dogs at the house when the Winslows go away for the weekend. The other dogs wreck the house, and Bosco exposes Marmaduke’s fake cat fight. Then, when the family returns home, Phil banishes Marmaduke to the doghouse.

Marmaduke decides to run away. The next morning, Phil must decide whether to skip an important meeting at work, or help the family look for Marmaduke.

MARMADUKE has a really clever, hilarious opening that sets the stage for the rest of the movie. The voice cast does a marvelous job, especially Own Wilson as Marmaduke and George Lopez as Carlos. The movie lags a bit in the middle when it forgets Marmadukle’s family and concentrates too much on Marmaduke’s relationship with the other dogs, but the third act is exciting and heartwarming when both Phil and Marmaduke’s lives are endangered by a sinkhole caused by a water main breaking and creating a flood.

MARMADUKE contains some scatological jokes, including jokes about juvenile delinquent dogs urinating into cups and on couches, and two jokes about Marmaduke passing gas in the parents’ bedroom. There are also brief drug jokes about the clique of dogs eating mushrooms in the dog park and about Marmaduke and Carlos being tranquilized before they take the airplane ride to California. So, MOVIEGUIDE® issues a caution to parents of younger children.

Otherwise, however, MARMADUKE is relatively free of objectionable content. It also has a strong positive worldview stressing the importance of supporting and helping one’s family and friends. Marmaduke also learns a lesson about not becoming too conceited and self-absorbed. And, the father learns a lesson about preventing his job from leading him to neglect his family commitments. There are many movies these days about fathers learning such lessons, because today’s modern, secular socialist society has spent so much time attacking the biblical notion that husbands are supposed to be the head of the household (Ephesians 5:22-33). By attacking this Christian, biblical principle from God so strongly, modern society foments chaos and confusion within men, women, children, families, and itself.