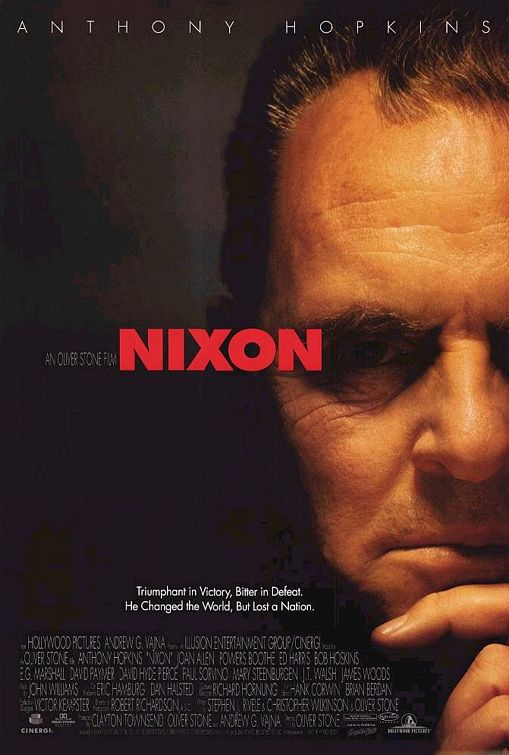 NIXON is a powerful yet flawed movie directed by Oliver Stone. Starring Anthony Hopkins in the lead role, it shows us in great detail his childhood, political victories & defeats, and the eventual disgrace of Watergate. The movie combines violent news footage with obscenity filled dramatic footage, to provide a somewhat inaccurate, but sympathetic portrayal of one of America's most fascinating presidents.

The new Oliver Stone film NIXON is a masterful, if flawed, work about a very complex man. The movie starts with a disclaimer stating that this is not history. It then gives the Bible verse Matthew 16:20, “For what is a man profited if he gains the whole world, and loses his own soul?” We discover Nixon’s childhood in Whittier, California, and how he got to attend law school. The movie also shows Nixon’s relationship with his wife Pat as he suffers political defeat and victory. The final hour of the movie details Nixon’s victorious summit meetings with Mao Tse Tung and Leonid Brezhnev and then quickly goes into the intricacies of the Watergate scandal. Throughout it all, Nixon broods and passes blame. In a moving final moment, alone with Kissinger in defeat, Nixon asks that they pray together. Nixon prays, “Please forgive me…” and finishes in tears.

Lead characters, Anthony Hopkins and Joan Allen captivate. The movie depicts Nixon to be profane and obscene behind closed doors. He is depicted as a solipsist, taking responsibility for his victories, but in some ways denying any involvement in his defeat. The movie is Mr. Stone’s least controversial and most spiritual, although it is still flawed, excessive and self-serving.