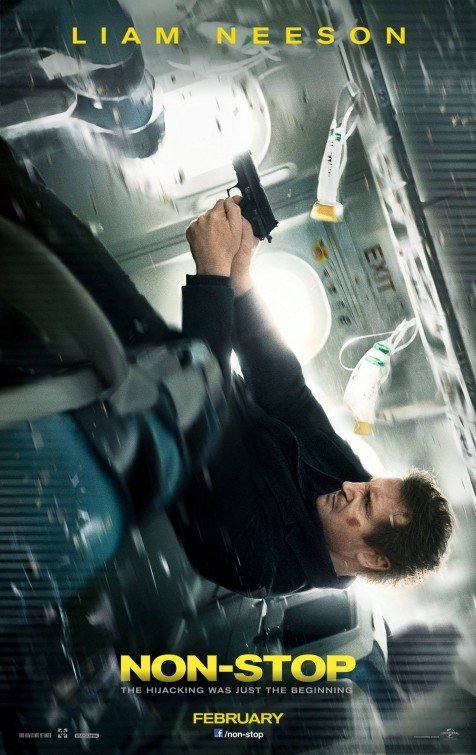 NON-STOP stars Liam Neeson as Bill Marks, a federal air marshal forced to get on a six-hour flight from New York to London. Bill is shown sneaking some whiskey, chain smoking cigarettes, and walking with a boozy, world-weary paranoia through the airport. Finally seated on the plane, Bill receives a text from an unknown passenger warning him that, if $150 million isn’t transferred to a bank account within 20 minutes, someone onboard is going to be murdered. Worse, he quickly realizes he’s the victim of an elaborately planned setup designed to make him look like a disgruntled agent who’s taken the plane hostage. A string of unforeseen consequences arises.

NON-STOP is a Liam Neeson thriller, which has almost become a genre unto itself. Neeson is once again perfect in this kind of role. Ably assisting him is a cast led by Julianne Moore. The director keeps the story moving at a breakneck pace befitting the title. NON-STOP has a strong moral worldview, but there is a light politically correct plot twist and plenty of PG-13 foul language. So, strong caution is advised.

(BB, P, Pa, PC, LLL, VV, S, AA, DD, M) Strong moral worldview stressing compassion, service to others, good overcoming evil, with a positive American federal marshal figure, but another federal marshal happens to be smuggling cocaine, plus some pagan elements and a light politically correct plot twist about American airplane security in the wake of 9/11, but movie avoids any solid or annoying partisan content; 24 obscenities, 11 strong profanities, four light profanities, and people say once or twice they “effed” up; strong action violence includes close fighting, federal hero strangles gunman who happens to be another federal marshal, but the other marshal happens to be smuggling cocaine, marshal twists some uncooperative passengers’ arms and violently confronts a couple more, explosion, airplane in peril, passengers tossed about and hit aircraft cabin ceiling, plane about to crash, villain shot dead; two passengers seem to be getting frisky under a blanket but nothing else is shown or implied; no nudity; alcohol use and hero has alcohol problems; smoking and cocaine smuggling; and, lying, authorities threaten to blow up plane they think is hijacked, attempted extortion but rebuked, hero is framed by bad guys but he stops their plot, and hero disables smoking alarm in plane bathroom.

NON-STOP is an exciting thriller about a heroic federal air marshal who has to save a plane from a mysterious killer that also serves as an intriguing mystery all the way to the finish. It has a strong moral worldview mixed with some strong pagan elements, including foul language, and politically correct plot twist involving Afghan and Iraqi wars and American national security.

Liam Neeson stars as Bill Marks, a federal air marshal forced to get on a six-hour flight from New York to London that he really doesn’t want to fly. In the opening minutes of the movie, Bill has been shown sneaking some whiskey, smoking a string of cigarettes and walking with a boozy, world-weary paranoia through the airport. It’s his job to always be alert to any potential threat, but he’s been in the business so long that everyone has become a threat in his eyes.

Yet, he’s stuck on the plane and is trying to make the best of it. Out of the blue, he receives a text from an unknown passenger warning him that, if $150 million isn’t transferred to a bank account within 20 minutes, someone onboard is going to be murdered. With a crowded plane flying over the open Atlantic Ocean, hours away from the nearest airport, Bill doesn’t have a lot of options to figure out where the threat is coming.

Worse, he quickly realizes that he’s the victim of an elaborately planned setup designed to make him look like a disgruntled agent who’s taken the plane hostage himself. This twist is an elaborately planned one. It’s so perfectly rendered that, if it wasn’t Liam Neeson playing Bill, viewers might be wondering if his character is a lunatic with an axe to grind. The twist also leads to a whole string of unforeseen consequences that neither Bill nor the audience expect.

NON-STOP is a “Liam Neeson thriller,” which over the past five years since the first “Taken,” has become a genre unto itself. In these movies, you know he’s going to be a righteous but tough guy with a bunch of special skills, ranging from hand-to-hand combat to expert marksmanship and the ability to drive insanely through the traffic of exotic world capitals. In fact, anyone who crosses him will soon be whimpering in pain or literally dead. These movies also feature an above-average plot and a ferocious intensity rooted in his desire to save his family or the families of others. Neeson’s characters are decent men who find a moral purpose in their work, beyond the mere attempt to stay alive.

Neeson is once again perfect in this kind of role. Director Jaume Collet-Serra, who has been teaming up with Neeson on a string of thrillers, including UNKNOWN, keeps the story moving at a breakneck pace that befits the title. A solid supporting cast led by Julianne Moore gives Neeson plenty of assistance.

The one possible caveat to give viewers is that the actual villains turn out to be former soldiers in the Afghan and Iraq wars, who are bitter about having lost loved ones in 9/11. They deliver an angry speech about the security state that they believe America has become, which some viewers may find a bit too politically correct. NON-STOP also contains plenty of foul language, including some strong gratuitous profanities. So, strong caution is advised.