"The Beauty of Creation" 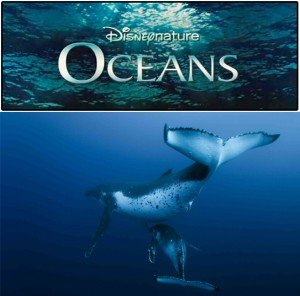 The Disney documentary, OCEANS, is a lush view of the world both on the surface of the sea and underneath. It shows creatures, fearful and awful, in brilliantly colorful and smoothly paced sequences. It displays many elements of the ocean, from the timid to the terrifying. This travelogue takes viewers to each continent to see all that God’s creation has to show of the vast oceans. There are scenes that viewers would otherwise never encounter. The movie’s filmmakers masterfully put them on display.

OCEANS is a beautifully shot and constructed documentary. It flows from scene to scene to keep its content entertaining. The content has little to offend even the youngest of viewers, but families should be aware of violent moments where great white sharks and killer whales hunt sea lions. Also, there is a light possible evolution element saying, “Bigger fish eat smaller fish.” God is not given credit as Creator for these wonders, however. And, there are some overt environmentalist elements showing polar icecaps breaking off and promoting the discredited global warming “crisis.” If viewers can get past that, they will find a lush view of God’s creation waiting.

(B, EEE, Ev, V, M) Light, family-friendly moral worldview that, however, does not overtly acknowledge God and contains some very strong global warming, environmentalist and light possible evolutionary “survival of the fittest” references to polar icecaps melting and to big fish eating little fish; no foul language; mild wildlife violence such as great white sharks hunting sea lions and killer whales try to eat baby sea lions; no sexual content; no nudity; no alcohol; no smoking; and, some references to pollution in the oceans which may or may not be a really huge deal.

Full of majesty and wonder, OCEANS puts on display what the ocean has to offer, great and small, and it does so in a lush, beautiful, well-paced way.

EARTH started the new Disney Nature series, but OCEANS takes us beyond that. It starts with a group of French children on the beach with narrator Pierce Brosnan posing the question, “What exactly is the ocean?”

The rest of the movie displays many of the elements of the ocean, from the timid to the terrifying, from the meek to the menacing, from the minute to the monstrous. This travelogue takes viewers to each of the continents to view all that nature has to show of the vast oceans. Crabs tiptoe, a blanket octopus sails, great white sharks hunt, and humpback whales nurture. There are scenes that most viewers would otherwise never encounter that God has on display in the great oceans of the world, and directors Perrin and Cluzaud masterfully put them on display. Few will ever get the opportunity to see hundreds of dolphins jumping and playing and moving in unison both over the surface and beneath the ocean.

The filmmakers have put together a compelling and beautiful vision of the ocean. The cinematography captures the majesty of creation in a world foreign to most of us. There are long vistas through which that eels glide, polar regions over which humpback whales crest together, and seemingly endless beaches across which newborn green turtles skitter, trying to beat predator seagulls to the sanctuary of the ocean. It’s a breathtaking view. It’s lovely.

The editing paces the action well, blending slow motion views with real-time, and Pierce Brosnan’s narration keeps the movie going. There are occasional lags, and there are moments when viewers may grow tired of the slow motion elements, but overall OCEANS is quite effective.

The content has little to offend even the youngest of viewers, but they should be aware of violent moments when great white sharks and killer whales hunt sea lions. Additionally, there is the element that “bigger fish eat smaller fish” (and you can substitute “crabs” or the sea creature of your choice for “fish”), but these scenes are limited, and there is little to shock or scare the viewer.

However, God is not given credit as Creator for these wonders, and there are some strong environmentalist elements showing polar icecaps breaking off in the wake of alleged global warming. If the viewer can see past that, they will find a beautiful, lush view of God’s creation waiting for them here.

By the end of this movie, the question “What exactly are oceans?” has long gone, but OCEANS attempts to at least show us what the oceans contain, and it does a thorough job of that.