OF MICE AND MEN 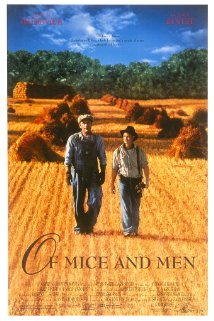 OF MICE AND MEN is a new screen adaptation of John Steinbeck's timeless novel. The story deals with two manual laborers in California during the depression era of the 1930's and has its humorous as well as sad moments. OF MICE AND MEN is not a "feel good" movie--it is a tragedy, and the filmmakers make no attempt to modernize the story.

(B, L, S, V) Many biblical principles, such as love, friendship, honor, and compassion, are challenged by tragedy in this classic story marred by 6 profanities, 4 obscenities and adulterous flirtation.

In the new screen adaptation of John Steinbeck’s OF MICE AND MEN, John Malkovich and Gary Sinise play Lennie and George, respectively, two manual laborers in California during the depression era of the 1930’s. The characters have a great need for each other. Because of his handicap, Lennie needs George the way a child needs a parent. While George relies on Lennie’s size and strength for protection. The men have a simple dream which they recount frequently: both of them desire a small house with some farmland. Thus, Lennie often pleads with George to retell their dream, and Lennie’s favorite part is that one day he will be allowed to care for the rabbits on their little farm. Lennie has a fascination with soft animals. He (literally) smothers them with love, which eventually ends in tragedy.

However, the story is a tragedy–not a “feel good” movie. The film makes no attempt to modernize the story in order to make it accessible to a contemporary audience. Also, a caution is in order: it is disturbing to see Lennie’s unintentional killing of animals and eventually Curley’s wife, although this aspect of the film is handled discreetly.

Rent or Buy OF MICE AND MEN:

Producer: Horton Foote BASED ON THE NOVEL BY: John Steinbeck