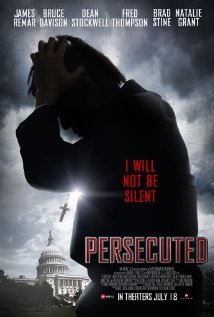 PERSECUTED is a suspenseful political thriller about a renowned evangelist who finds himself targeted by a conspiracy to limit religious freedom in America. Popular Christian evangelist John Luther is framed for an innocent teenage girl’s murder when he decides to publicly oppose a new law he believes will limit religious freedom. John tries to get evidence to clear his name while avoiding the police and government agents. John’s father, a Catholic priest, helps him, but the bad guys send assassins after them.

PERSECUTED is exciting and suspenseful, but slow and slightly confusing in a places. Though well directed, the story probably could use a little more focus, action, or conflict, and some more dramatic dialogue. The acting is top-notch, however. It features several veterans, including James Remar as the evangelist, Dean Stockwell, Bruce Davison, and Fred Thompson. PERSECUTED is fairly clean but has some strong violence. It deals with an important issue, religious freedom, in an intelligent, balanced way. It’s not preachy or ham-fisted. PERSECUTED lets the villain make his case for the new law. This makes for a more interesting movie.

(CCC, BBB, PPP, ACACAC, VV, S, A, D, M) Very strong Christian, biblical, moral, patriotic worldview with positive references to God, prayer and the Bible, movie promotes positive American, patriotic, pro-liberty values such as freedom of speech, worship and religious belief and opposes big government, statist policies restricting such liberty, though some Christian leaders are enticed to give up part of their freedom for tax benefits, but this is rebuked; no foul language; strong violence with some blood includes man shot in head, man wounded in lower chest by gunshot, FBI officer shot dead, FBI officer wounded in leg, two henchmen shot dead, hero has bloody wounds, and reference to woman having been raped and murdered; no depicted sex, but Christian evangelist is drugged and forced to have some photos made with older teenage girl sitting on his lap and looking at camera to take phony photos of him as if he’s drunk and later it’s said she’s been found raped and murdered; no nudity but there might have been some female cleavage; brief alcohol use and references to hero’s past alcoholism problem from which he’s recovered; man smokes cigar and evangelist is drugged so he can be framed, but this is seen as bad; and, evangelist blackmailed and framed, extortion, conspiracy, government corruption, Christian leaders seduced by money but this is rebuked, and evangelist hero questions God at one point but keeps his father strong if not stronger afterwards.

PERSECUTED is a suspenseful political thriller about a renowned evangelist who finds himself being targeted by a secret conspiracy to limit religious freedom in America.

Nationally acclaimed Christian evangelist John Luther tells a powerful senator he will publicly oppose a new “equal time” law he believes limits religious freedom too much. The senator orders John to be framed for the murder and rape of an innocent teenage girl. John tries to get the evidence to clear his name while trying to avoid the police and government agents. John’s father, a Catholic priest, helps him, but the senator sends operatives and assassins after them.

PERSECUTED is exciting and suspenseful, but slow and a bit confusing in places. For example, sometimes it seems some important scenes were left on the cutting room floor. For example, in one scene, some lowlifes blackmail the evangelist for a video they took that proves his innocence. Later, the evangelist passes the videotape on a flash drive to his father, but the movie doesn’t actually show paying the evangelist paying the blackmailers. The movie also implies that the President of the United States is in on the schemes to get the evangelist out of the way, but that plot twist could use more clarity. Finally, the movie as now edited doesn’t explain how exactly the evangelist could have a father who’s a Catholic priest.

Ultimately, therefore, PERSECUTED probably could use a little more focus, action, or conflict (see the original MANCHURIAN CANDIDATE from 1963). It could also use a little more dramatic or passionate dialogue (see the debates in the early part of 1959’s BEN-HUR starring Charlton Heston, or those in the 1964 movie SEVEN DAYS IN MAY starring Burt Lancaster, Kirk Douglas, and Fredric March, for some good examples of passionate, dramatic dialogue in a political, philosophical context). Finally, although the music is wonderful, it seems inappropriate or overdone in a couple scenes. The very first scene or sequence is an example of this.

[Some spoilers might follow] Though perhaps a little far-fetched, PERSECUTED deals with an important issue, religious freedom, in an intelligent and balanced way. It’s not preachy or ham-fisted. PERSECUTED also lets the bad guy make his case for the new law. This makes for a more interesting movie.

In addition, the movie gives a warning to the Christian Church, the Body of Christ, to be careful about getting in bed with the government. In the movie, the new law offers churches and religious groups a special tax benefit to entice religious leaders into supporting the new law. When the evangelist gets framed for the girl’s murder, his right-hand man convinces the organization’s board of directors to support the new law so they can get more financial donations. This leads to an intense confrontation between the evangelist and his board of directors, including his right-hand man who clearly wants to take away leadership of the group from the evangelist. PERSECUTED also contains positive references to God and prayer. In one scene, the evangelist questions God, but his faith seems to get even stronger after this scene.

PERSECUTED doesn’t tie up all the loose ends at the end. This isn’t disappointing. Instead, it gives viewers a more thought-provoking experience, a chance to discuss the important issues the story generates and to ask themselves what the evangelist in the story should do next. What would they do?

Despite its problems, PERSECUTED is a good movie that’s worth seeing. It has no foul language, but it has some violence and some brief innuendo about the frame-up between the evangelist and the murdered teenage girl. So, PERSECUTED is for older viewers and warrants a caution for children.

All in all, MOVIEGUIDE® commends writer and director Daniel Lusko for making such a provocative political thriller from a strong Christian, and somewhat conservative or libertarian, perspective. The positive values expressed are not only Christian and biblical but also American and pro-liberty values. As noted, the movie isn’t too preachy, so Non-Christians, moderates and liberals should be able to enjoy the movie as well.