"A Call for Authenticity" 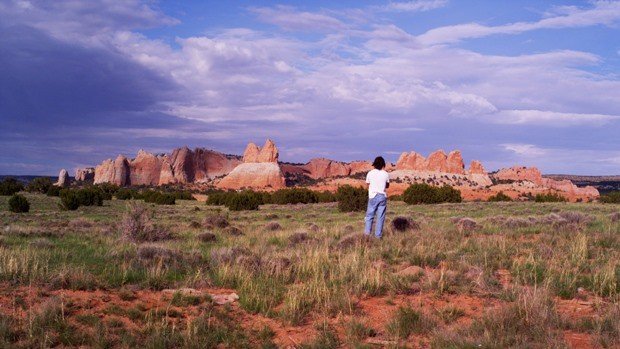 RAGAMUFFIN tells the story of Christian singer/songwriter Rich Mullins. It documents his internal struggles and success within the Christian music industry of the 1980s, as well as his conflicts with the industry. Rich finds success in the 1980s with songs like “Sing Your Praise to the Lord” and “Awesome God,” but has a drinking problem. The problem gets worse when the woman he loves tells him she’s engaged and when Rich grows increasingly weary of his fame. The question becomes, will Rich ever find a way to mesh his life on the road with biblical truths?

RAGAMUFFIN is a captivating, well-made Christian movie with excellent writing and acting. It’s proportional, doesn’t feel too long despite its length, and has a fantastic screenplay and cinematography. RAGAMUFFIN has a strong Christian worldview with several biblical themes extolling simplicity, authentic relationships, humility, and other virtues. The movie shows the protagonist’s journey toward a closer walk with God. However, it has alcohol abuse and smoking, as well as brief foul language and a perilous car accident. For these reasons, RAGAMUFFIN warrants caution for younger viewers.

RAGAMUFFIN tells the inspirational true story of Christian songwriter and singer Rich Mullins, an impassioned man who rose to prominence in the Christian music industry in the 1980s but took less conventional paths to success. It’s an excellent biographical drama of a Christian artist who had to overcome a drinking problem engendered by feelings of loneliness.

Rich’s story begins in rural, farmland Indiana in 1962, where Rich is one of five children. His father is a farmer, and Rich wants to be just like his dad. However, his father is verbally abusive to Rich on several occasions. Rich’s mother asks her father to be more gentle with him, but the father refuses, because he wants to toughen up Rich. Rich has a hard time believing God loves him because his dad doesn’t seem to love him. This theme of parental neglect shows up on several occasions in the movie.

Early in RAGAMUFFIN, Rich is shown playing the piano really well. He takes piano lessons and says, “Something about sitting at a piano made me feel like I was home.” Rich begins to feel like he’s different, that he doesn’t belong on a farm.

Rich becomes rebellious and connects to the story of St. Francis, who had a radical trust in Christ. In 1974, he decides to leave home and heads to the Cincinnati Bible College in 1974. While there, he befriends a man named Sam. Together, they form a band called Zion. While playing in this band, Rich realizes he wants to have music as his ministry. So, he moves off campus to pursue this vision further. He soon meets a girl named Jess, and they begin a relationship.

In 1981, a record label representing Amy Grant listens to a demo of his and is interested in one of his songs, “Sing Your Praise to the Lord.” They tell him they want to use it for Amy Grant’s upcoming album, but he tells them he’s not interested. He doesn’t want to go, because he wants to stay near Jess. However, after Jess shows less and less interest in him, he becomes depressed, starts drinking and even becomes drunk several times.

Eventually, Rich moves to Nashville and acquires a recording contract, touring with Amy Grant and opening for her concerts. He loves touring and meeting new people, but he struggles with feelings of loneliness. One night he calls Jess, and she tells him she’s engaged, which devastates him.

Rich battles with the record label over being authentic and even leaves during a session because they pressure him to do music a certain way. He criticizes the Christian music industry of his time for being too “flowery.” Rich is disrespectful to the label, but the label owner tells him it’s disrespectful to God to waste his talent.

Rich leaves for a while and travels to a Navajo reservation. He enjoys playing music and meeting new people, and feels this experience is more authentic. While traveling from the reservation, he begins writing the lyrics to his song “Awesome God,” which hits the radio in 1988. His most famous song, it ignites an even more intense touring schedule. However, Rich grows increasingly weary of his fame. Again, he starts drinking more often.

Later in the movie, Rich listens to a tape by Christian leader Brennan Manning, and gets out of the car and cries. Rich eats at a restaurant with Manning. Manning tells Rich he’s a “ragamuffin,” meaning that a true follower of Jesus is like a poor child in shabby clothes, not passionate for the wealth of the world, willing to be lowly and humble. Rich claims this philosophy of simplicity and brokenness through the remainder of his life, although it is unclear whether this affects his alcoholism. The question becomes, will Rich ever find a way to mesh his whole life with Biblical truths?

RAGAMUFFIN carries a strong Christian worldview with several biblical themes extolling simplicity, authentic relationships, humility, and other virtues. It promotes a simple lifestyle and warns of the love of money, and also calls viewers to Christian authenticity. It recounts a gifted musician’s struggle with a formula-driven music industry, and with American Christianity as a whole.

RAGAMUFFIN is a very well made movie in every sense. It’s proportional, doesn’t feel too long or dragged-out, has tremendous acting by the whole cast, and has a fantastic screenplay and cinematography. It’s a captivating movie and one of the best low-budget Christian movies moviegoers can see.

RAGAMUFFIN has a few hard-to-watch scenes of verbal abuse by Rich’s father, but these scenes are part of the story. Some of those scenes include light obscenities. There are also several scenes of Rich binge drinking and wandering into places drunk. Rich also smokes a lot. Finally, there’s a fatal car accident in the movie. Because of this content, RAGAMUFFIN warrants caution for some younger viewers.