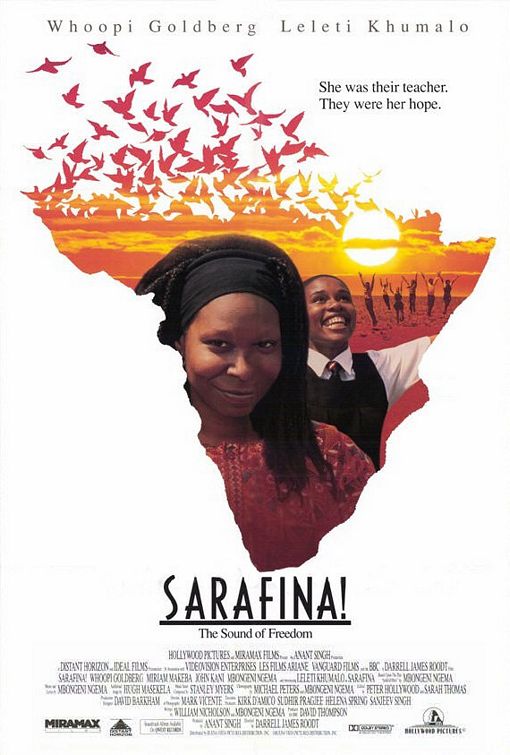 SARAFINA! is an emotionally and politically impassioned story that registers the anti-apartheid movement's anger and hope in an infectious musical context and refutes revenge, violence and murder as a solution. However, the movie is biased, distorting the situation in South Africa and placing Mandella on a pedestal.

SARAFINA! begins in Sowetto, South Africa, as young Sarafina speaks to Nelson Mandella’s photograph. She has a remarkable teacher played by Whoopi Goldberg. Under this teacher, Sarafina learns that freedom is not enough but also how to develop inner pride and have a goal. The teacher tells the students that it is okay to fight back but not to kill. However, Sarafina’s friends are rebels. When riots break out, the police shoot, and students are murdered. In retaliation, the students locate a black police man whom they burn to death. Later, students are imprisoned. In prison, Sarafina realizes that Mandella cannot hear her. Upon release, Sarafina visits her mother, confessing the murder. She now considers her mother a hero for working and accepting her responsibilities.

SARAFINA! is a grim musical which demonstrates the anger surrounding apartheid, yet refutes revenge, violence and murder as a solution. However, the movie is biased, distorting the situation in South Africa and placing Mandella on a pedestal. Perhaps, the filmmaker should heed the word of God to the people of Israel, “Do not pervert justice; do not show partiality to the poor or favoritism to the great, but judge your neighbor fairly” (Leviticus 19:15).