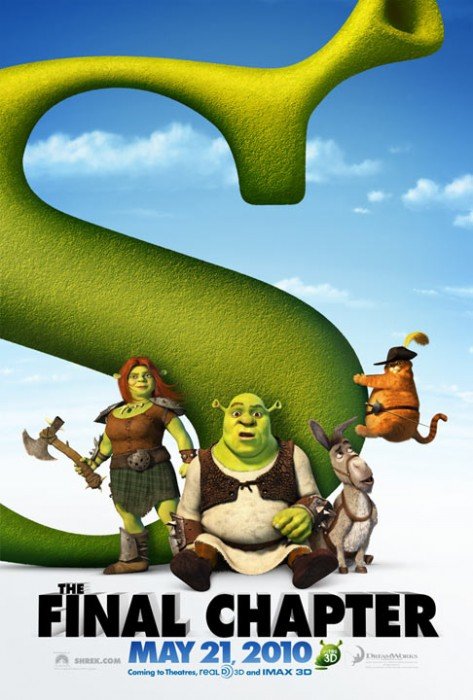 SHREK FOREVER AFTER, the final chapter in the SHREK movies from DreamWorks, is absolutely delightful! In this sequel, Shrek has grown tired of the family routine of raising three babies with Fiona. He’s even tired of his best friend, Donkey. Shrek is duped into signing a pact with the smooth-talking gnome Rumpelstiltskin. Suddenly, he finds himself trapped in a twisted alternate reality where Rumpelstiltskin is king, ogres are hunted, and Fiona doesn’t recognize him. Now, it’s up to Shrek, with help from a suspicious Donkey, to set things right!

SHREK FOREVER AFTER is terrific, hilarious, exciting fun for the whole family. It’s the most heart-stirring, emotionally engaging SHREK movie. Also, it’s got the best family values. Not only does Shrek learn the importance of marriage, family and the bonds between parents and children, he also learns the meaning of sacrifice. SHREK FOREVER AFTER is great family fun that reflects the biblical principle of marriage that God established in Genesis 2:24 and that Jesus affirms in Matthew 19. The movie perfectly captures such divine sentiments in a very entertaining, heartfelt way. It provides a wonderful conclusion to this groundbreaking animated series.

(CCC, BBB, PPP, V, N, A, M) Very strong Christian, biblical, moral worldview affirms the Christian, biblical, moral values of heterosexual marriage, family and the bonds between husband and wife and between parent and child, including father and child, as well as extols sacrifice for others, without mentioning God but also opposing witchcraft and sorcery (witches are bad in the movie, but they themselves, not their witchcraft, are implicitly redeemed at the end), plus a very patriotic subtext with traditional Western, American, British values opposing tyranny; no obscenities or profanities, but babies pass gas and mother says, “Better out than in,” babies belch, ogre visits outhouse three times and is surprised once when it’s destroyed, and father ogre gets sprayed while changing baby ogre’s diapers but it turns out to be water from a squirting toy, but all this is done very lightly; light cartoon and action violence includes some fighting, characters are captured and held against their will, the Pied Piper forces characters to dance, evil witches drop smoke bombs on people, dragon chases characters, and ogre enjoys scaring people, but nothing really intense or upsetting (it’s more action than violence, and the witches look a little scary but they are not intensely scary like the witches in THE WIZARD OF OZ but are more sullen than scary); no sex but some kissing; upper male nudity on ogre protagonist; alcohol use; no smoking; and, deceit but it is firmly rebuked, father wants to get away from family duties but learns his lesson in the end, ogres like mud-baths, ogre cook has an effeminate voice, and a gravel-voiced woman with Five O’Clock shadow beard says hello.

SHREK FOREVER AFTER, the final chapter in the SHREK movies from DreamWorks, is absolutely delightful! It is a hilarious SHREK adventure filled with lots of heart. Best of all, it has some wonderful, inspiring messages for the entire family. This may perturb some jaded viewers looking for a darker story with more edge, but too bad for them!

The story of the fourth SHREK movie opens by revealing that the parents of Shrek’s beloved wife, Fiona, were just about to sign over their kingdom to the evil gnome Rumpelstiltskin when news about Shrek saving Fiona reaches them. Years later, Rumpelstiltskin and his pet duck are living on garbage while Shrek and Fiona enjoy ruling the kingdom of Far Far Away.

There’s trouble in the kingdom, however. Shrek is getting tired of the family routine, including helping Fiona take care of their three babies and everyone dropping in at their house causing chaos and saying and doing the same things.

At the first birthday party for the babies, Shrek can’t take it anymore. After smashing the birthday cake, he storms out of the place. By wicked design, Rumpelstiltskin shows up and entices Shrek to share a rat and a drink with him. He offers to magically give Shrek one of his childhood days back, so that Shrek can behave like an ogre again for a day.

Little does Shrek know that the day Rumpel picks is the day of Shrek’s birth. In effect, it’s almost as if Shrek was never even born, meaning that, ala George Bailey and his wife in Frank Capra’s masterpiece IT’S A WONDERFUL LIFE, Shrek was never there to rescue Fiona. That gives Rumpel the chance he’s wanted to take the kingdom away from Fiona’s parents. Shrek suddenly finds himself in a twisted alternate reality where ogres are hunted, Rumpel is king, and no one recognizes Shrek, not even his wife or his best friend, Donkey.

This sets the stage for Shrek to put things right, restore the world and reclaim his one True Love.

SHREK FOREVER AFTER is terrific, hilarious, exciting fun for the whole family. It’s the most heart-stirring, emotionally engaging SHREK movie yet. And, it’s got the best family values. Not only does Shrek learn the importance of marriage, family and the bonds between parents and children, he also learns the meaning of sacrifice. When Fiona tells Shrek that he saved her, Shrek replies, “No, it’s you who saved me.”

SHREK FOREVER AFTER even has a message that rejects sorcery and witchcraft. The villain, Rumpelstiltskin, is an evil, deceitful sorcerer surrounded by wicked witches. He and the witches enjoy ruling the kingdom and lording it over the citizens, including the human ones. They also hunt down the ogres whenever they can.

SHREK FOREVER AFTER is great family fun that reflects the Christian, biblical principle of marriage that the Bible establishes in Genesis 2:24: “For this reason a man will leave his father and mother and be united to his wife, and they will become one flesh.” Jesus Christ affirms this definition of marriage in Matthew 19:3-12, adding, “What God has joined together, let man not tear asunder.” The movie perfectly captures this divine sentiment in a very entertaining, heartfelt way. It provides a wonderful conclusion to this groundbreaking animated series. The decision to use the story motif of the beloved family movie IT’S A WONDERFUL LIFE is a brilliant stroke of genius.

Rent or Buy SHREK FOREVER AFTER: