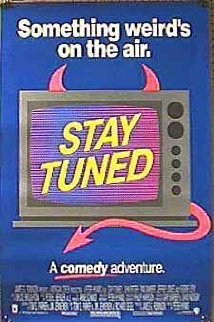 In STAY TUNED, a suburban couple accepts a free trial deal for 666 channels of Hellvision. The plot thickens as they are sucked into a make-shift TV land with 15-hours to beat the clock or lose their souls. Of course, STAY TUNED attempts to make a big joke out of Hell. It mockingly questions the Christian worldview and values and suggests that it may be based on myth and superstition.

In STAY TUNED, a suburban couple accepts a free trial deal for 666 channels of Hellvision. The story begins with Roy Knabble, a couch potato stuck in a dead-end job. Addicted to TV, Roy’s relationship with his wife, Helen, and the children needs a spark. However, sparks turn to flames when Roy signs a deal with a demonic salesman to try 24 hours of a super-satellite dish. To Roy’s amazement, one channel airs programs such as “Three Men and Rosemary’s Baby,” which parodies the original, and “Sadistic Hidden Videos.” Helen and Roy get sucked into the Hellvision, whose channels reach Earth to drag new souls into the nether world. On Hellvision, the Knabbles undergo an obstacle course of life-threatening TV shows. They must stay alive for 15 hours in order to get a free pass back to reality. Meanwhile, the children watch TV in the comfort of their living room, staring as their parents escape one trap after another. Somehow, they develop a plan to bring their parents back. Back on earth, Roy vows never to overdose on TV again.

Obviously, STAY TUNED attempts to make a big joke out of Hell, mockingly questioning the Christian worldview and suggesting that it may be based on myth and superstition.