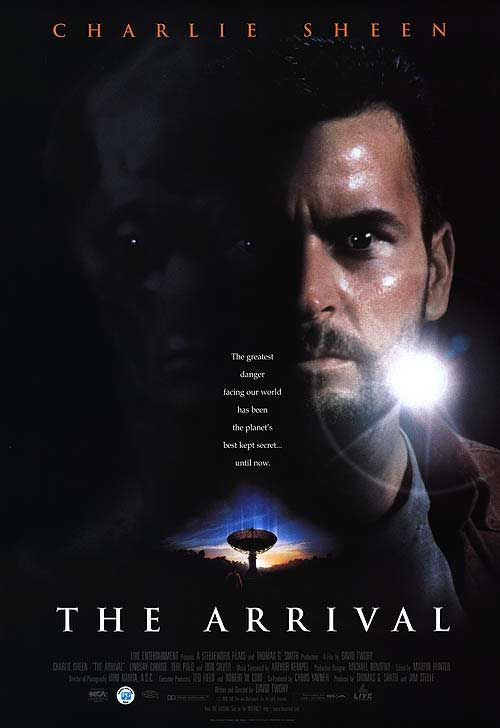 In THE ARRIVAL we find out that aliens are responsible for global warming. Charlie Sheen plays Zane Zaminksi , a techie who tries to expose the evil intentions of aliens who seek to change the earth's climate. Regrettably, the movie boils down to a mere scolding and not the earth versus the monsters.

THE ARRIVAL answers the question, “Who is responsible for global warming?” Charlie Sheen plays Zane Zaminksi, a techie who operates a satellite dish which searches the universe for signs of intelligent life. One day, he gets a signal that he believes is from an alien. Going to his superior, Gordian, Zane hopes to get an even larger grant to take this hypothesis further. Instead, Zane is fired. Zane decides to take matters into his own hands, gets a little buddy helper named Kiki and rigs a huge antenna. Then, Zane goes to Mexico where he tries to find a radio station on the same frequency as the alien signal. When he arrives, he finds the station burned down and a policeman looking like Gordian. Zane attempts to frame the alien Gordian and expose the evil intentions of these aliens, who seek to change the earth’s climate.

Played with determination, THE ARRIVAL takes an alien conspiracy theory to a logical conclusion. Sheen eagerly plays Zane with aplomb and grit, while supporting roles equally stand up to the silly premise. The one detriment to this movie is that it should be more tongue in cheek. Furthermore, the climax seems anti-climatic. While he does stop a few aliens, he tells a remaining alien to “Be careful. It’s going to be a lot harder for your to accomplish your goals.” In a sense, the movie boils down to a scolding and not the earth versus the monsters.