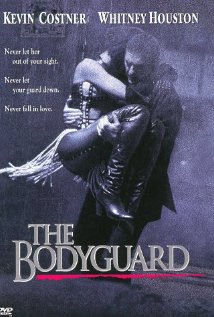 In THE BODYGUARD, rock star Rachel Merritt (Whitney Houston) reluctantly hires bodyguard Frank Farmer (Kevin Costner) to protect her from an obsessed fan. The bodyguard's number one rule: his willingness to lay down his life for the life of his client. The film is well crafted and acting commendable. Also, there are positive references to Christianity and Jesus Christ; however, be aware that the movie is marred by over 25 obscenities and 23 profanities; several violent scenes and murder; implied scene of fornication (although nothing is shown); many scenes of drinking; and, the theme of jealousy.

(B, C, LLL, VV, S, A/D, M) A dedication to laying down one's life for others is marred by: over 25 obscenities & 23 profanities; several violent fighting scenes with people getting beaten up with considerable blood, gore & murder; implied scene of fornication (but nothing shown); scenes of drinking in bars and other places; and, theme of jealousy throughout the film.

In THE BODYGUARD, rock star Rachel Merritt reluctantly hires bodyguard Frank Farmer to protect her from an obsessed fan; the bodyguard’s number one rule: his willingness to lay down his life for the life of his client. Through a series of swift-moving events, the bodyguard has various opportunities to prove out his rule. One night, however, he and Rachel spend the night together, and he tells her the next morning that he confused his life with his job, and it will not happen again. At film’s end, Farmer discovers the would-be assailant’s identity and saves Rachel’s life.

Well crafted and acted, THE BODYGUARD can be commended for its overall premise. Kevin Costner fits the role as the bodyguard perfectly in his understated, concise and sparse dialogue. The film moves well with suspense building to the climax. Two significant elements need to be pointed out: the first, is Nikki’s (Rachel’s sister) singing “Jesus Loves Me” outside on a beautiful morning, and later, at her funeral, we hear her singing it again as her voice hovers over the hearse carrying her body. The second element consists of a clergyman being called on to pray during a Congressional meeting near the film’s end. However, be aware that the movie is marred by: obscenity and profanity; several violent scenes; implied fornication (although nothing is shown); many scenes of drinking; and, the theme of jealousy which resonates throughout the film.