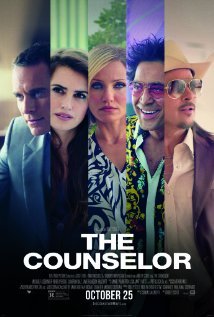 The story in THE COUNSELOR is not only itself confused. It’s also presented in a confusing manner. THE COUNSELOR contains gratuitous, extraneous scenes and gratuitous, extraneous characters, including two gratuitous sex scenes. This content is wrapped in a confused and confusing humanist worldview preaching, at various times, nihilism, hedonism, survival-of-the-fittest, and fatalism. It attacks Christianity. Furthermore, the villain gets away with her crimes. Finally, the abhorrent COUNSELOR also contains plenty of strong foul language, lewd content and grisly violence.

(HHH, EvEv, C, AbAb, FRFRFR, B, Ho, LLL, VVV, SS, NN, AA, DDD, MM) Very strong but confusing, confused and sometimes contradictory humanist, nihilistic worldview about a drug deal gone sour, with evolutionary survival of the fittest themes where heartless female villain who mocks Christianity and morality is identified with a cheetah catching its prey (though she is a villain, she [SPOILER ALERT] does win in the end, and everyone else is destroyed), Catholic Christian priest is slightly a positive figure, but he’s also ineffectual and flees confrontation rather than try to use his Christianity to mitigate it or defeat an evil woman who slyly mocks him in a confessional booth before he flees from her mockery in disgust, plus very strong false theology/philosophy includes some humanist, defeatist, fatalistic, nihilistic-sounding mumbo jumbo about creating your own reality and not being able to change it (even when it results inexorably in awful tragedy and being overcome by evil), and female villain seems to get the last word when she brings out the survival-of-the-fittest theme and seems to warn another person away from evil people and evil situations, but movie does seem to be somewhat of a cautionary morality tale (but only within its humanist perspective), plus a minor references to lesbian activity; at least 49 obscenities, 17 strong Jesus profanities, six light profanities, and images of septic tank sludge; very strong grisly violence when device severs man’s carotid artery and blood sprays all over, motorcycle rider’s head decapitated by wire and killer, shakes the head out of the helmet later, man shot dead in butt and head, bloody gunfight, woman struggles against her captors, body dumped onto hill of landfill trash, cheetah chases a rabbit, man’s body found in barrel; strong sexual content includes partially depicted oral sex, woman takes off panties and rubs her nude parts over car windshield and man crudely describes incident to a friend, a minor but crude references to lesbian activity, and man picks up a woman in hotel lobby; partial rear female nudity in one shot and brief upper male nudity; alcohol use and drunkenness; smoking and story is about illegal drug trafficking; and, greed is behind almost all the character motives, but it’s partially rebuked in a kind of backhanded way, betrayal, deceit, villain steals and gets away with it, and villain frames three innocent people and gets two of them killed.

Though rated R, THE COUNSELOR seems at first like it might be a well-produced thriller with some excellent acting and a riveting story. Though the quality of the technical production and some of the acting is high, the story, plot, characters, dialogue, and themes are a mess. Worse than that, the movie has a confusing and confused humanist worldview, with some sly but specious, hollow and gratuitous attacks on Christianity and godless attitudes ranging from tragically defeatist and fatalistic (not to mention obtuse) to nihilistic and hedonistic. The movie does contain a message showing that the wages of sin is death and tragedy, but this potentially positive moral message gets lost in the confusion.

The movie opens with the title character, who’s never named, in bed with his girlfriend. Cut to a drug shipment being stashed in a septic tank truck and covered in excrement. Cut to a Hispanic guy with his sexy blonde girlfriend watching one of two pet cheetahs chasing down a jackrabbit in the desert. The blonde has cheetah spots tattooed on her body. Cut again to the Counselor buying an expensive engagement ring diamond for his girlfriend. Cut again to the Counselor talking with the Hispanic man about some kind of deal and then talking with a smooth-talking man about some $20 million drug smuggling operation the Counselor is doing to earn money, probably to pay for that engagement ring. The question of ethics comes up in these conversations, but the Counselor is still adamant about going through with the deal.

Eventually, the septic tanker hiding the drugs is hijacked violently a couple times. The drug cartel, which paid the Counselor and his two partners $20 million for delivery of the drugs to Chicago, believe the Counselor and his Hispanic partner are behind the theft. The cartel marks for death not only the Counselor but also his Hispanic friend and partner, and the Counselor’s fiancée turned wife. [SPOILER ALERT] The real villain, however, turns out to be the blonde with the cheetah tattoo. Her cohorts hijack the tanker first, but her real target turns out to be the money that the smooth-talking drug dealer, played by Brad Pitt, has stashed offshore, including some or all of that $20 million.

The story in THE COUNSELOR is not only itself confused, it’s also presented in a confusing manner. Also, only the movie’s title really tells viewers who the protagonist is supposed to be. THE COUNSELOR also contains gratuitous, extraneous scenes and gratuitous, extraneous characters. For example, two sex scenes have nothing to do with the basic plot. Also, the Counselor and the Hispanic friend discuss one of the sex scenes for a long time, at the end of which the Hispanic man says they should forget the whole story. Viewers will wish they could forget this scene and its boring aftermath.

Worst of all, the movie’s perspective or worldview is not only confusing. It’s also confused. For example, there’s talk about creating your reality by your actions and decisions, fatalistic talk about not being able to change one’s reality, defeatist talk about oncoming evil, talk about women and what they do to men, talk about greed, talk about the joys and value of being a hunter in a survival-of-the-fittest way, and a scene where the female villain slyly mocks an earnest, upstanding Catholic priest in a confessional booth, which eventually drives him away in disgust. Though sometimes contradictory as well as confusing and confused, all this blabber leads up to a very strong humanist, nihilistic worldview. It also leads to tragedy, murder, death, and despair. In fact, at one point, an innocent character’s body is dumped in a trash landfill, a shot that may remind cinephiles of the final shot in Luis Buñuel’s heartbreaking last shot in his movie about poor children and juvenile delinquents in Mexico City, LOS OLVIDADOS (THE FORGOTTEN ONES), from 1950. Finally, the main villain gets away with murder, theft, deceit, putting an innocent woman’s life in fatal danger, and mocking Christian morality and Christian clergy. Worse, the movie strongly suggests or even contends that little or nothing can be done about such evil.

THE COUNSELOR also contains plenty of strong foul language (including the most blasphemous obscenities misusing the name of Jesus of just about any other major movie this year), explicit sexual references, illegal drug running, grisly violence, and other immoral behavior. It’s an abhorrent and gratuitous mess that itself deserves to be dumped in a pile of trash.

On a final note, the screenplay for THE COUNSELOR is written by acclaimed novelist Cormac McCarthy of NO COUNTRY FOR OLD MEN and THE ROAD. He clearly specializes in nourish thrillers that recall the works of such authors as Raymond Chandler, Dashiell Hammett, and James M. Cain. The problem with his stories, unlike the novels of Raymond Chandler (who is probably the best writer of this bunch put together), is that there seem to be no heroes at all and no strong moral center in McCarthy’s writing. As Chandler once wrote in his essay about detective stories and mysteries, “The Simple Art of Murder,” “In everything that can be called art there is a quality of redemption,” and the real world requires, if not a savior, at least a man (or a woman) “who is not himself mean, and neither tarnished nor afraid. . . . a man of honor – by instinct, by inevitability, without thought of it, and certainly without saying it. He must be the best man in his world and a good enough man for any world. . . . [and] if he is a man of honor in one thing, he is that in all things.”

Ultimately, therefore, THE COUNSELOR has no heart, no moral courage, not much intelligence or wit, and no honor. Also, there is no Wizard of Oz to lend it any of those things. Except, perhaps, for the obsequious, phony pseudo-intellectual elitists running the news media and America’s critic organizations, who like to insert redeeming qualities and artistic value when there are none.