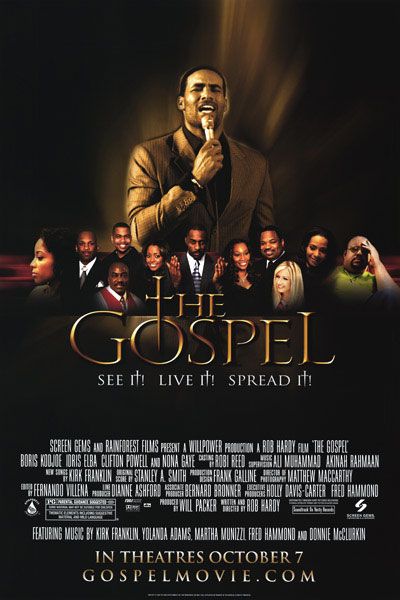 THE GOSPEL is a sincere but amateur retelling of the prodigal son. At the start of a national tour, a singer named David learns that his father is ill, so he returns home to Atlanta. After his immersion in the world of secular entertainment, many people in his black gospel church are suspicious of David, and his childhood friend, Frank, doesn’t think he should be welcomed back after straying so far from the flock. David’s father is the pastor of the large church, and he welcomes back David with open arms. What ensues makes David question the life he has pursued, and he challenges Frank’s ego-driven takeover of the church.

THE GOSPEL is filled with dramatic preaching and praise songs. There are references to Scripture, and wayward characters are told they need Jesus. There is also a strong message against legalism in the church. There are few objectionable elements, including a few very mild curse words. The drawback is that THE GOSPEL, despite some successful moments and good intentions, is an amateur production with a flawed script and cheap budget. THE GOSPEL also doesn’t have the overt redemptive message of WOMAN, THOU ART LOOSED.

THE GOSPEL is a sincere but unpolished retelling of the story of the prodigal son. It is a story about the dying pastor of a gospel church in Atlanta who welcomes his playboy singer son back into the fold, amid the protests of his associate pastor.

David Taylor is the son of a charismatic pastor with a large following. He and his friend Frank grow up in the church using their vocal talents to praise God. When David’s mother dies suddenly, however, and his father is out of town preaching at a conference, David bitterly leaves the church and disconnects from his father. Instead of pursuing gospel music, David becomes a soul singer.

At the start of a successful national tour, David receives news that his father is ill, so he leaves Los Angeles and returns home to Atlanta. After his immersion in the world of secular entertainment, many people in the congregation are suspicious of David. His oldest childhood friend, Frank, doesn’t want him there at all. David’s father is Frank’s mentor, and Frank feels that he has been faithful to Bishop Taylor while his own son David has ignored him.

Bishop Taylor, then, is the prodigal son’s father, ignoring that his son has strayed so that he can welcome him back home. Frank is the jealous brother, upset that the prodigal son should be celebrated after his disobedience. The gracious treatment from his father makes David reevaluate his family, his church and his career. Will it be enough, however, to steer the church away from Frank’s ego-driven takeover?

THE GOSPEL is filled with dramatic preaching and praise songs. There are many references to Scripture, and wayward characters are forcefully given messages like, “You need Jesus – you need Jesus.” There is also a strong message against turning the church into a cult of celebrity, which has become common practice on some television and radio stations. Although most of the talk is positive and the major characters experience Christian redemption, there is relatively little talk of Jesus or salvation. Most of the church scenes refer simply to God.

Because of its cheap budget and a clumsy script lacking humor, THE GOSPEL could never be the breakout hit that DIARY OF A MAD BLACK WOMAN was last spring, and it doesn’t have the overt redemptive message of WOMAN, THOU ART LOOSED. That makes it a strange choice for Sony to release in theaters. The movie actually makes more sense as a direct-to-video title.

Working in its favor is that there are few objectionable elements in the movie. The curse words, of which there are only three, are extremely mild. In the beginning, the main character seems like a womanizer, but he quickly changes his behavior and finds a woman with whom he wants to have a committed relationship. He even tells his friend that they’re saving sex for marriage.

THE GOSPEL has some successful moments and good intentions, but overall it’s an amateur production that lacks wide appeal.