"Lots of Exciting Fun But Marred" 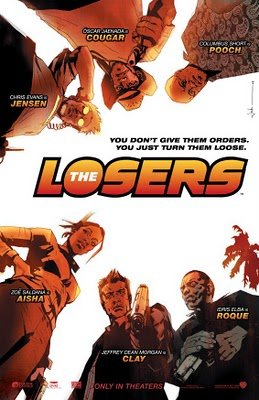 In THE LOSERS, a mysterious CIA black ops handler, Max, betrays a Special Forces team in Bolivia. Max frames Col. Clay and his four men, who he thinks are dead, for the death of some children during an attack on a drug lord. Stuck in Bolivia, Clay is approached by a mysterious woman named Aisha. Aisha offers to sneak them back into the U.S. and help them get even with Max. She has her own secret agenda, however. Also, Max plans to set off a sonic bomb somewhere in the United States, to start a new round in the war on terrorism and earn a billion dollars on the side.

THE LOSERS has some likeable good guys, two well-defined villains who are easy to hate, believable acting, and a crackerjack plot with lots of action. It also has some funny, clever comedy. The good guys are heroic, mostly upstanding American soldiers who care about children and family. The movie’s positive elements are spoiled, however, by plenty of foul language, some bedroom scenes, and a politically correct sub-plot. THE LOSERS also contains lots of strong action violence. Thus, MOVIEGUIDE® advises strong caution.

(BB, C, P, AP, PC, LLL, VV, SS, N, A, DD, MM) Strong moral worldview of good guys stopping villain and henchmen with some light Christian, redemptive elements (including one hero makes the sign of the cross and a willingness to sacrifice for others, including vulnerable children), marred by a mixed message of Pro-American, Anti-American and politically correct sentiments; 40 obscenities (including many “h” words, many “s” words, one muffled “f” word, and one “f” word clearly heard), seven strong profanities, and seven exclamatory light profanities; plenty of action violence with light blood includes gun battles, explosions, bomb dropped, children saved but then killed in explosion (this brutality is not explicitly shown), man and woman fight, man deliberately shot in legs, man accidentally shot in arm, knife fight, man dropped from high building, people knocked unconscious with tranquilizer bullets, villain shoots unarmed man to death in cold blood point blank but shot is not shown penetrating man; bedroom scenes include implied fornication, steamy kissing and half-naked woman kisses man who’s lying down (the nude kissing is depicted in a way where the explicit sexual nudity is not shown); upper male nudity, woman in bra and panties, and implied nudity during shot of woman without bra from behind (nothing explicit is actually shown); alcohol use; smoking and drug lord’s lair is attacked; and, strong miscellaneous immorality includes betrayal, villain tries to fake a terrorist attack, good guys steal an army helicopter by knocking out the crew, revenge, and greed.

Those who really can’t wait until June 11, 2010 to see the movie version of television’s THE A-TEAM might be tempted to check out THE LOSERS after it opens April 23. Be warned, however, that the movie has a couple moral problems and a liberal conspiracy theory about a rogue CIA team leader, even though it does make you root for some good American soldiers.

Based on a comic book series, the movie opens in the jungles of Bolivia. The CIA has sent an undercover Special Forces team to make sure a drug lord is at his hideout, so the team can give the go-ahead to bomb the place with a U.S. jet.

The team discovers there are children at the hideout, because the drug lord is using them to transport his drugs. The leader, Col. Clay, tries to call off the bombing, but their boss, a mysterious, unscrupulous man named Max, won’t let them.

Clay decides to lead his team into the camp to free the children before the bombs fly. They get all the children out, the drug lord gets killed, and the hideout is blown to smithereens. However, when Clay loads all the children onto their escape helicopter instead of his men and him, Max orders the helicopter blown up, thinking Clay and his men are in it (this brutality is not explicitly shown, but the movie uses it to define the villain’s evil character).

Max and the CIA let Col. Clay and his men take the rap for killing the children. Not knowing that the children were killed on the helicopter instead of the team, they make the world believe that Clay’s team killed the children in the camp before they themselves were killed. Apparently, Max’s plan all along was to kill Col. Clay and his team because the drug lord had some information detailing Max’s corruption.

With no way to return home, Clay and his team are stuck in Bolivia hiding out. A mysterious black woman named Aisha shows up and convinces Clay she can get him and his men back into the United States. She also convinces him they have a chance to get even with Max and kill him when Max visits Miami for some kind of secret operation.

Clay and his men, especially one guy named Roque, are suspicious of the woman’s motives, but they go along with her plan anyway. Their suspicions turn out to be right. But, what none of them know is that Max and his right-hand guy, Wade, are planning to set off a sonic bomb somewhere in the United States, to start a new round in the war on terrorism and earn a billion dollars on the side.

THE LOSERS has some likeable good guys, some good villains who are easy to hate, believable acting, and a crackerjack plot with lots of action. It also has some funny comedy as Col. Clay and his men engage in various ops and repartee. Also, during the story, viewers discover that one of the men has a pregnant wife back in the states, and another man is following his young niece’s soccer team on the Internet.

Culturally and morally, THE LOSERS has some good and bad parts.

First, the good guys try to save the children, and almost succeed. Second, they also try to stop Max’s evil scheme to set off the sonic bomb. Finally, the movie also makes the good guys sympathetic by having the single guys care about the families of their married buddy and their buddy with the cute niece.

On the negative side, THE LOSERS does have a lot of strong action violence and plenty of foul language, including a couple “f” words and several strong profanities. Secondly, Clay and Aisha have a couple steamy bedroom scenes. Finally, Max’s evil, covert shenanigans shed a bad light on the CIA, which that outfit definitely doesn’t deserve (despite its slightly checkered history). In fact, Max’s plot to fake a terrorist attack on U.S. soil is a typical liberal/leftist conspiracy theory. This kind of radical political sensationalism, like all the kooky leftist theories that the federal government (not Osama bin Laden and his Muslim henchmen) blew up the World Trade Center on 9/11, is mean, mendacious, unpatriotic, and Anti-American, if not seditious and treasonous.

Happily, however, despite the movie’s depiction of the CIA and Max, the good guys are not wacky leftist pinheads. In fact, they are shown to be heroic, mostly upstanding American soldiers who care about children, family and country.

Even so, MOVIEGUIDE® advises strong caution because of the movie’s foul language, bedroom scenes and liberal conspiracy theory. As usual, please read the CONTENT section above for more details before deciding whether to see the movie!