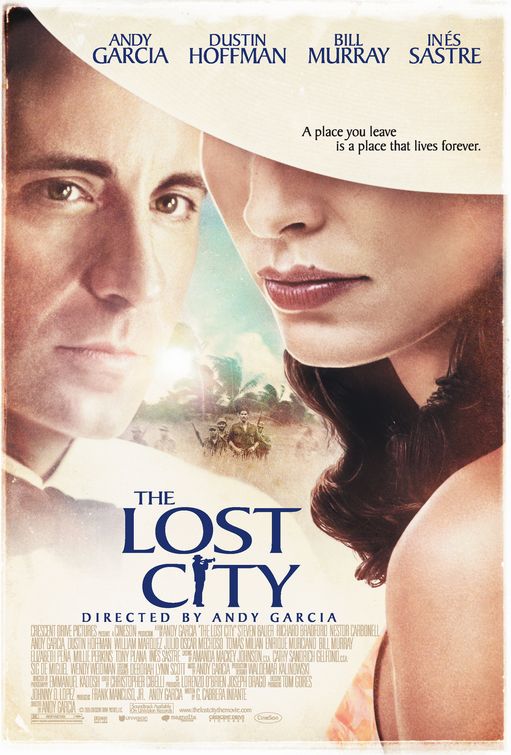 THE LOST CITY follows the heartbreaking tale of one family, three brothers and a beautiful woman, against the backdrop of the overthrow of Cuban dictator Batista in 1959 and the establishment of Fidel Castro's brutal, oppressive Communist dictatorship. Written by the late Cuban novelist Guillermo Cabrera Infante and directed and starring actor Andy Garcia, a Cuban exile, the movie shows how the family of three brothers disintegrates amid the revolutionary violence. Batista's henchmen kill one brother and another brother joins Castro's ruthless regime, but one brother's love for freedom, Havana, his Cuban heritage, and his family never dies.

THE LOST CITY not only is a loving tribute to Havana and Cuban art and music, it is also a loving tribute to liberty, democracy and capitalism. Castro's regime is clearly portrayed as an evil dictatorship. The movie is very pro-family and contains positive Christian content. Despite five obscenities and very strong violence, THE LOST CITY is one of the most important movies of the year. It tells the truth about Fidel Castro's ruthless, Communist regime and its minions. It deserves to be seen by all voters and politicians in every country on earth.

(BBB, ACACAC, CC, CapCap, PP, FR, L, VVV, S, A, D, M) Very strong moral worldview celebrates and extols family bonds, liberty, democracy, Christian faith, national heritage, positive cultural traditions, and the concept of moral absolutes, and takes a very strong stand against Fidel Castro’s Communist regime and fascist forms of totalitarian tyranny, plus strong positive Christian content in a Catholic setting includes a strong family dinner prayer, a positive reference to Jesus kicking the money lenders out of the temple in Jerusalem and a church funeral with a hymn, strong pro-capitalist content shows the injustice of Communist seizure of private property (including small items) and celebrates the American Dream of owning one’s own business yet also critiques the corruption and crime that can come with corporate capitalism (especially people and organizations with too much power [as with any socio-economic system, however]), strongly positive patriotic and pro-American content and values celebrate national heritage, being faithful to one’s country, trying to protect one’s country from rapacious, corrupt and truly tyrannical leaders, and the benefits of liberty that the United States offers to those fleeing Communist dictatorships, some very light libertarian, or antinomian, false religious qualities may be implied in the movie’s definition of what liberty means as well as some light false religious notions of pacifism are suggested, and a couple possible homosexual allusions or jokes; five obscenities (including one “f” word and one apparent obscenity in Spanish) and zero profanities; very strong violence with some blood includes army officer assassinated, people storm presidential palace to assassinate dictator, people shot in street battle, police hunt down revolutionaries and kill them, one or two off-screen executions, two explosions, at least one black and white newsreel footage of Communist execution of one man whose head is blown half off, man commits suicide with gun, and older man has painful heart attack; lightly implied fornication as woman lies sleeping in bed while man in T-shirt looks out from balcony and a couple possible, but very light, homosexual allusions or jokes; upper male nudity in one scene and chorus line of women appears in bikini-type costumes showing cleavage and midriffs; alcohol use; smoking; and, betrayal, famous gangster tries to take over nightclub, brutality very strongly rebuked, and totalitarianism very strongly rebuked.

Actor Andy Garcia (THE UNTOUCHABLES, GODFATHER III and OCEANS ELEVEN) has been nurturing this project for 16 years. The screenplay is written by the late Cuban novelist Guillermo Cabrera Infante. The movie follows the heartbreaking tale of one family, three brothers and a beautiful woman against the backdrop of the overthrow of Cuban dictator Batista in 1958 and 1959, and the establishment of Fidel Castro’s brutal, oppressive Communist dictatorship.

In 1958, the city of Havana is the Paris of the Caribbean. Batista keeps a firm, brutal hand on the nation. Pacifist intellectuals and activist politicians try to lobby for change, but the streets simmer with a desperate urban resistance movement while in the rural, mountainous countryside the revolutionary M26 forces of Fidel Castro and Ernesto “Che” Guevara prepare to move on Havana, their full intentions unclear.

In the midst of this trouble in paradise, Fico Fellove (played by Andy Garcia) struggles to hold together his family, his classy music nightclub and the love of a woman. His younger brother Ricardo speaks out harshly against the pacifist lectures of their professorial father, Don Federico, and Fico and Ricardo almost come to blows. When Ricardo gets arrested, however, Fico enlists the help of a police captain and old baseball buddy to get Ricardo out of jail, and Ricardo departs for Castro and Che’s hideout in the hills.

Meanwhile, Fico’s other brother, Luis, leaves his wife Aurora to lead the underground democratic resistance movement. Luis asks Fico to take care of Aurora if anything happens to him. An attempted assassination of Batista fails, and the police hunt down Luis and kill him.

At first, Fico is reluctant to carry out Luis’s wishes about Aurora, because he has always had unrequited feelings for her. When, however, Aurora, stays secluded in her house out of extreme sadness, Fico’s mother encourages him to start taking Aurora out of the house. Slowly, Fico and Aurora fall in love, but the coming to power of Castro’s revolution threatens to tear them apart forever.

Poetic, dramatic and at times incredibly moving, THE LOST CITY not only is a loving tribute to Havana and Cuban art and music, it is also a loving tribute to liberty, democracy and capitalism. Castro’s regime is clearly portrayed as an evil dictatorship, giving the movie a very strong Anti-Communist message that nonetheless also criticizes National Socialism or fascism. The movie is also very pro-family. The patriarch of Fico’s family is shown as a loving leader who advocates peaceful resistance and the importance of family over politics. Regrettably, one of his sons, Ricardo, refuses to obey him, and even Aurora strays. Although Fico and his brothers are not overly religious, THE LOST CITY also contains some strong Christian content in a Catholic context, including a lovely dinner prayer among Fico’s family. Thus, family, faith and freedom are all worthy virtues celebrated in this wonderful movie.

The lush photography in THE LOST CITY is matched by its fine performances. As the director, Andy Garcia does an excellence job in bringing these characters and this place and time to life. His passion, and pain, for Havana and Cuba – and the Cuban people – are lovingly marked on nearly every single frame.

THE LOST CITY is not without its flaws. For example, the pace is a little slow at times, and Fico’s character is a bit passive in the beginning. The movie soon picks up, however, as events unfold. There are many brilliantly done set pieces, including the storming of the presidential palace, the brutal hunt for Fico’s brother and his gang, the frivolous and frightening nature of Castro’s increasingly totalitarian control of Havana, the scenes of Fico with his father, and two dramatic confrontations that Fico has with the Communist leaders at a party and with a customs official. At an early point in the movie, Fico’s father mentions the story of Jesus using a whip to drive out the money lenders in the temple. “We’re badly in need of a Christ with a whip,” he adds. Later, after Castro has taken power, Fico tells his father that Fidel’s revolution is “all whip.”

This comment brilliantly captures the difference between Christian and conservative solutions to political and economic oppression and Communist, Neo-Marxist solutions. In that light, THE LOST CITY suggests that the United States represents a beacon of freedom not only to Cuba and the rest of Latin America, but also to the whole world.

Happily, this is one political, historical movie that explodes the lies behind that evil pop culture icon, Che Guevara. Recent demonstrations by illegal aliens contained some T-shirts and placards with Guevara’s likeness on them. THE LOST CITY shows, however, the kind of monster that Guevara truly was. At one point in the movie, Che asserts, “The ends justifies the means.” By attacking the terrible regime that Castro and Guevara brought to Cuba in this way, Andy Garcia and his team are making a powerful defense of the need for eternal values and moral absolutes. Their movie not only is a credit to Cuba, it is also a credit to the adopted country of their families, the United States. Despite all of the tragic circumstances surrounding today’s Cuba, the movie ends on a spirit of hope, freedom and celebration. THE LOST CITY deserves to be seen by all voters and politicians in every country on earth. Cuba Libre!

The distributor of this movie, Lions Gate Films, often makes movies with a lot of objectionable content. MOVIEGUIDE(r) praises them for agreeing to distribute this movie. It is a very brave thing for them to do, especially considering the pro-Castro sentiment in some powerful parts of Hollywood. It is hoped that Lions Gate will heavily promote THE LOST CITY. The movie is rated R for violence, but, except for a suicide scene, the violence is not gratuitous.

Rent or Buy THE LOST CITY: