TWIN PEAKS: FIRE WALK WITH ME 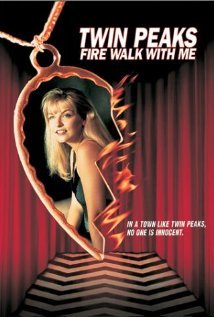 TWIN PEAKS: FIRE WALK WITH ME, a prequel to the cult TV series, explores the strange circumstances that led to the murder of high school prom queen, Laura Palmer. Writer-Director David Lynch indulges his extreme perverted sexual fantasies in this far-fetched, dreary movie.

TWIN PEAKS: FIRE WALK WITH ME, a prequel to the cult TV series, explores the strange circumstances that led to the murder of high school prom queen, Laura Palmer. The movie begins one year before the TV series time frame as Laura is still alive and indulging her appetites. A special agent is sent to a nearby town to investigate the death of a young woman, Teresa Banks, but he disappears in the process, and a year later, another agent is called in to investigate the agent’s disappearance, and also, Laura Palmer’s. For the most part, the movie centers on the impact of a mysterious “Bob” on Laura’s life; and, of course, “Bob” turns out to be her father who has repeatedly sexually abused Laura.

The movie is dark and hopeless. People are just on their own, and God is not ever spoken of–except to profane Him. For anyone who has seen the TV series, this should be no surprise. If you were to paint the picture, it would be done with grays and brooding deep tones. It is hard to explain, but there is just an ambiance that is so melancholy and dreary–the state of ALL the souls in the film. This film would be inappropriate for moral individuals, if only because of the director’s indulging his perverted sexual fantasies to such an extent, but the real harm lies in the fact that the movie is so totally removed from any communion with God.