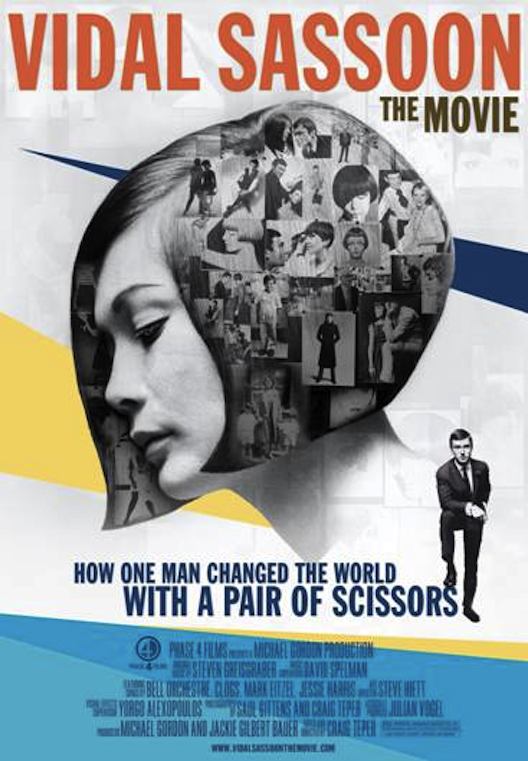 VIDAL SASSOON: THE MOVIE documents the life and creative work of Vidal Sassoon, the famous hairstylist. The movie shows Vidal enduring a troubled childhood and turning into an international icon who revolutionized the whole hairstyling industry. The movie is structured in a liner pattern. As such, it follows a visual book and tribute to Vidal by the founder of the hair care company Bumble & bumble, Michael Gordon.

VIDAL SASSOON: THE MOVIE has some weak plot points. Sometimes, the storyline does not flow properly; it contains unnecessary scenes that don’t seem to add much. Otherwise, the movie is beautifully shot, mostly in vivid black and white, which creates a high design sense. Vidal Sassoon himself seems to have humanist values. He says a few times that only by his own works can he find the spirituality he sees, not in religion. Sassoon also moves from wife to wife with a Romantic mentality where each relationship is judged only by a feeling of the heart, not by God’s will. Overall, VIDAL SASSOON: THE MOVIE has a great sense of design and beauty, but the mixed worldview and dysfunctional family lives require caution.

(PaPa, H, Ab, Ro, B, L, S, N, A, DD, MM) Strong, somewhat mixed pagan worldview includes pagan references to yoga positions, title character rejects religion in favor of his own self-centered humanist philosophy, and some Romantic elements regarding family and marital lifestyle, plus some moral elements include charity work and a reference to a Jewish background; three profanities; no violence; mention made of male hairdressers sleeping with clients and mention of an extra-marital affair and divorce; upper male nudity and the “mini skirt” is honored; alcohol use; reference to title subject’s daughter overdosing on drugs; and, lack of a good father figure and dysfunctional family portrayal leads to Vidal Sassoon’s daughter overdosing on drugs.

VIDAL SASSOON: THE MOVIE documents the life and creativity of Vidal Sassoon. The movie follows the visual book that the producer of the movie and founder of the hair care company Bumble to Bumble, Michael Gordon, had put together as a tribute to Vidal.

Vidal experienced a troubled childhood. After Vidal’s father left, he was taken to an orphanage in London, but when his mother remarried she planted in him a dream to become a hairdresser by taking Vidal to be an apprentice to a barber in the London Ghetto. Vidal then moved to apprentice under a known old-fashioned hairstylist of the day and became inspired to totally change the industry.

From this, Vidal was inspired and opened his first hair saloon with a modern and innovative approach. Vidal’s first saloon revolutionized the whole industry, from the large windows that looked in on the on goings of the saloon, to the modern decorations, to the attractive barbers who would completely cater to client needs.

The first Vidal Sassoon saloon was a launching point for innovative haircuts with revolutionary designs inspired by architecture. Known for large gestural movements while cutting hair, Vidal was called “magical” and a “messiah.” Vidal strived to understand the head and natural fall of the hair. From this, he created shape and design. He did this through short “bob” haircuts that took shape and changed the whole scene of hairstyling and gave women freedom with their hair.

Sassoon decided to “make money even while someone is sleeping” by creating a shampoo product, named “Vidal Sassoon.” He started to market it heavily. As a result, the product grew and was used all across the country and the world. Already onto his second wife, Vidal started to build a family. At this point, Vidal became a cultural icon and started to do TV appearances. He even had a television show with his wife Beverly. Vidal and Beverly are praised for their good health tactics including doing yoga. Eventually, after having three children, Vidal and Beverly divorced.

The documentary jumps to today, showing Vidal still healthy and active. During Hurricane Katrina, Vidal starts a charity for hairstylists. He believes in his own virtue and self-giving for a spiritual experience, which he says religion cannot provide.

Sassoon is still very inspired and in love with design, creativity, and architecture. Through his acts of creativity, he transformed the hairstyling industry.

VIDAL SASSOON: THE MOVIE is structured in a liner pattern, following a visual book put together as a tribute to Vidal Sassoon. It definitely has some weak plot points. For instance, sometimes the storyline doesn’t flow properly, with unnecessary scenes that don’t seem to add to the purpose. Otherwise, the movie is beautifully shot, mostly in vivid black and white, which creates a high design sense.

Vidal Sassoon himself seems to have humanist values. He states a few times that only by his own works can he find the spirituality he sees lacking in religion. Sassoon also moves from wife to wife from a sort of Romantic mentality that each relationship should be based on a feeling of the heart.

VIDAL SASSOON: THE MOVIE is an informative documentary of one of a 1960s icon who changed the culture. Despite some light moral elements and a strong pro-capitalist view, the movie presents a mixed worldview and dysfunctional family lives. There is also brief but light foul language. MOVIEGUIDE® advises caution for children and those with impressionable minds.