"Where Does Your Moral Compass Point?" 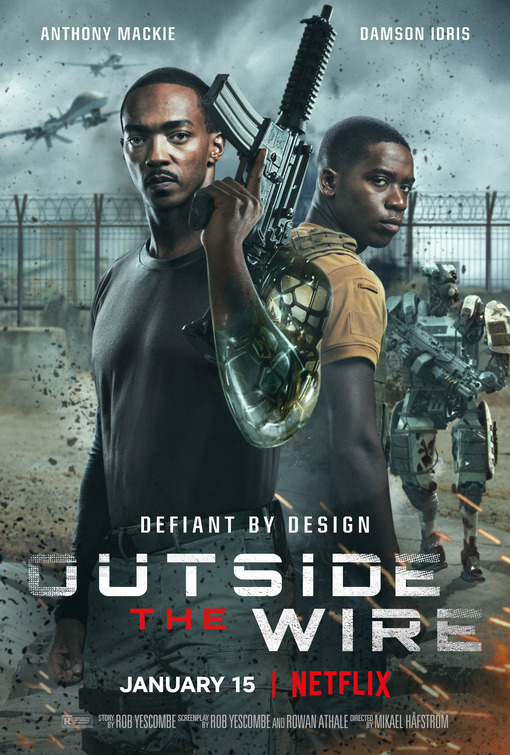 Set 15 years into the future, OUTSIDE THE WIRE follows a military captain, Leo, and an Air Force drone pilot, Lieutenant Thomas Harp. After making a drone mistake, Harp is sent to Eastern Europe to help keep the peace during a civil war over Ukraine. Captain Leo reveals to Harp that he’s a classified android made by the United States government. This causes Harp to wonder how Leo’s technological makeup will impact the people they need to protect. Leo convinces Harp to destroy the chip the military uses to track him. At the time Harp doesn’t think much about it, until Leo goes rogue and civilians and the United States are put in danger.

Streaming on Netflix, OUTSIDE THE WIRE is a well-structured, entertaining science fiction thriller. It has a strong moral, patriotic worldview stressing compassion and human control over technology. The hero, Lt. Harp, has faith in people and supports his home country, the United States. Sadly, OUTSIDE THE WIRE is marred by lots of strong, gratuitous foul language and some extreme, bloody action violence. MOVIEGUIDE® urges extreme caution.

(BB, PP, AP, PaPa, C, AC, LLL, VVV, S, N, D, M):
Dominant Worldview and Other Worldview Content/Elements:
Strong moral, patriotic worldview extols compassion and marriage where soldier hero must overcome the schemes of the villain, an Anti-American android soldier created by the United States government who wants to destroy his creator and has a lawless pagan attitude, some Christian elements such as an Orthodox priest prays over someone in a hospital bed and two other Ukrainian men wear crosses around their necks, and brief anti-communist ideals
Foul Language:
109 obscenities (mostly “f” words), four strong Jesus profanities, 11 light profanities
Violence:
Very strong and strong action violence includes guns pointed at hostages’ heads, man gets stabbed with a flag pole and there’s blood depicted, dead bodies with gunshot wounds to the head with dried blood on the bags covering their faces, some blood splatter, and a character who bleeds out profusely in the neck, beatings, hand to hand combat with knifes and a few characters get sliced up, two men get pushed off a roof in different scenes, explosions depicted, burnt bodies shown quickly, gunfire throughout, and a mention of death
Sex:
One sexual joke
Nudity:
Upper male nudity
Alcohol Use:
No alcohol use
Smoking and/or Drug Use and Abuse:
Man tries to light a cigarette, but no drugs; and,
Miscellaneous Immorality:
Characters hold a grudge against a lieutenant for his actions.

Set 15 years in the future, OUTSIDE THE WIRE follows a drone pilot sent into a civil war in Eastern Europe who runs into problems when the android soldier above him turns rogue and threatens civilians and the United States. Streaming on Netflix, OUTSIDE THE WIRE is a well-structured, entertaining science fiction thriller, with a strong moral, patriotic worldview, but it’s marred by lots of strong gratuitous foul language and some extreme action violence.

OUTSIDE THE WIRE begins in the year 2036 with Eastern Europe in full jeopardy. Civil war rages in the region, and the U.S. has been stationed as peacekeepers. The Pentagon has also okayed the use of robot soldiers called “Gumps” to aid in the crisis. While a ground battle ensues, Lieutenant Thomas Harp, a drone pilot stationed in Nevada, disobeys a direct order, which kills two Marines.

As punishment for his disobedience, the Air Force sends him to Camp Nathaniel overseas where the conflict continues. Lt. Harp meets Captain Leo, a tough commanding officer who seems impressed with Harp. Leo tells Harp he will be on the ground, instead of behind a screen operating a drone. Their mission is to remove weapons from insurgents “outside the wire,” or outside the territory they control as peacemakers.

Leo explains that the civil war began when a group named the Krasnys tried to make the Ukraine part of Russia. The Krasnys are run by a war lord named Vicktor Koval, who has Moscow’s full support to continue to make his dream a reality. The U.N. pulled out of the debacle, which leaves the United States to clean up the mess. A group called the Resistance also wants to thwart the plans of the Krasnys.

Before Leo and Harp go to complete their first task to deliver vaccines to women and children cholera victims outside the wire, Leo takes off his shirt. In doing so, he reveals that he’s an android. Harp is dumbfounded that the man (or sort of man) that he must work with is so lifelike.

On the ground, Harp learns very quickly that military action out from behind his computer screen is very different. Although Leo successfully calms down men with weapons, shooting breaks out, but the duo escapes unscathed.

Harp and Leo meet up with Sofiya, leader of the Resistance, to plan their next move. Along with Sofiya’s help, they track down who sold the Krasnys weapons earlier that morning. All of the puzzle pieces add up together until the next bit of military action.

Leo convinces Harp to destroy his “fail-safe” chip which the military uses to track him. At the time Harp doesn’t think much about it until civilians are put in danger, and Leo goes rogue. With Leo nowhere to be found, Harp starts to think this classified android operation might not be the gold mine the American officials hoped.

OUTSIDE THE WIRE’s Anthony Mackie (CAPTAIN AMERICA: CIVIL WAR) and Damon Idris (SNOWFALL) make a solid on-screen team. The action sequences that frequent the script are choreographed well. The movie has an engaging entertainment value, with plot points in appropriately placed within the movie’s nearly two-hour timeframe.

OUTSIDE THE WIRE has a mixed worldview. The two lead characters are representatives of two different worldviews. The real man, Harp, has a moral worldview while the android, Leo, displays a façade of morality and acts on his own accord in a lawless pagan way. It’s clear, however, that Leo the android is the villain. Leo asserts that sometimes you have to get down and dirty to accomplish any good, hence his complex nature. At first, Leo’s actions appear to have a positive impact on people. However, he really believes that humanity isn’t capable of learning from their mistakes, including their mistake of making an android solider like himself that can go rogue and take matters into his own hands. In this too, Leo displays strong Anti-Patriotic characteristics while Harp the other lead winds up making a decision showing faith in people and his home country, the United States.

In all this, OUTSIDE THE WIRE seems similar to AVENGERS: AGE OF ULTON, or the Marvel villain Thanos, who believes that killing many people to prove a point is worth it in the end. The villain also asserts he wants to destroy his creator, which is the United States. There are only two or so Christian elements, so the movie’s worldview would’ve been better served had there been mention of our Divine Savior, Jesus, who is humanity’s ultimate source of hope. Instead, viewers must settle for the moral hero saving the day. Sadly, though, OUTSIDE THE WIRE contains lots of strong, gratuitous foul language and some extreme bloody violence. So, MOVEIGUIDE® urges extreme caution.