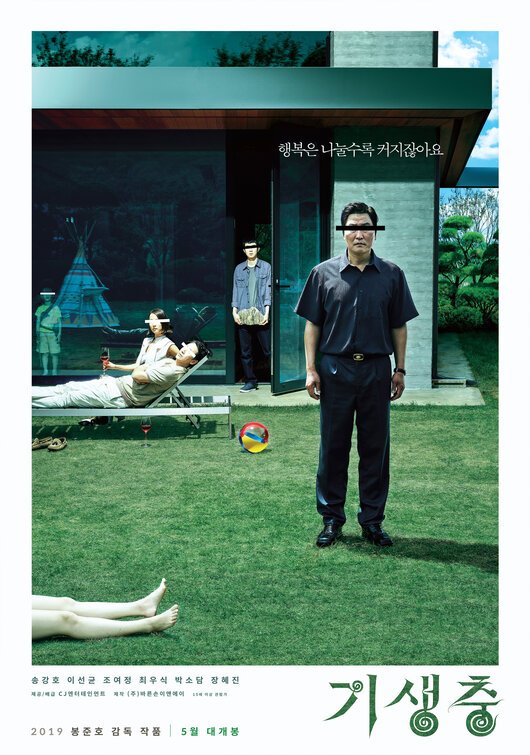 PARASITE is a black satire of class warfare from South Korea where both the rich and poor are bitterly portrayed. A poor family named Kim uses deception to ingratiate themselves into a rich family named Park as a maid, a chauffeur, and children’s tutors. When the Parks go away for a weekend for their son’s birthday, the Kim family really lives it up by getting drunk and gorging themselves in the Park’s home. However, the former maid unexpectedly shows up in the midst of a driving rainstorm and is determined to open a hidden tunnel in the basement – a tunnel that hides something beyond everyone’s wildest imaginings. Violence eventually erupts, and no one’s life will ever be the same.

PARASITE becomes a thrill ride that’s alternately suspenseful, funny and shocking. Both the poor family and the rich family are deeply flawed. However, the movie has a strong Romantic, politically correct worldview that depicts both families as victims of a corrupt capitalist system. PARASITE also contains lots of strong foul language, extreme violence, drunkenness, some lewd content, and a bitter, hopeless nihilistic streak.

(RoRoRo, PCPCPC, AcapAcapAcap, LLL, VVV, SS, N, AA, DD, MMM):
Dominant Worldview and Other Worldview Content/Elements:
Very strong Romantic, politically correct, anti-capitalist, ultimately godless worldview in a dark satire about South Korea where rich and poor alike have become corrupt under a corrupt system, and violence eventually explodes between two poor families vying for a piece of the pie and the violence leads to a poor man taking everything out on the male head of a rich family (it’s a pretty nihilistic, misanthropic movie that ends on a wish that maybe things can work out right, but the wish is clearly based on wishful thinking, and there is no God and no salvation to offer any hope
Foul Language:
At least 51 obscenities (including many “f” words), two strong GD profanities, one strong Jesus profanity, two light profanities, and a couple scenes where a drunken man late at night urinates in the street near an apartment that’s located below the street, massive flooding in a basement apartment causes the toilet to overflow with sewage, and a short scene where a man briefly examines a toilet
Violence:
Some very strong violence and strong violence includes people stabbed in chest and one in the back, woman fights a man with a knife, man impaled, woman kicks another woman down some steps and she hits her head against a cement wall, later the injured woman clearly has a terrible concussion, and she eventually dies, brutal fight where a man slings a rope around another man’s neck as the man is running and thus choking him and dragging him back, man beats his head against a light switch brutally to send a Morse Code signal to outsiders, man smashes a giant rock into another man’s head, and the action results in much blood, and a flood devastates a poor family’s basement apartment as they struggle during the flooding, and their toilet overflows with sewage
Sex:
A married couple is seen on a couch with the man pleasuring his wife by rubbing and grabbing her genital area over clothing and feeling her breast underneath her shirt while she grabs his genitals over his clothes as well and they both moan loudly as the scene fades out (they are unaware that three other people are hiding near them under a low table
Nudity:
Brief upper male nudity
Alcohol Use:
Alcohol use and a poor family working for a rich family get wildly drunk while the rich family take a camping trip, and a drunken man urinates in the street late at night in a couple scenes
Smoking and/or Drug Use and Abuse:
Some smoking and a couple drug references; and,
Miscellaneous Immorality:
Very strong miscellaneous immorality includes deception, greed, envy, forgery, and ruthless attempts to take from the rich, and a rich man looks down on his servants while they’re not around to hear him.

PARASITE is a pitch-black satire of class warfare from South Korea where both the rich and poor are bitterly portrayed. In the story, a poor family in South Korea schemes its way into the world of a rich family as servants, with devastating consequences for all involved when the rich family’s former maid unexpectedly returns with a terrible secret. PARASITE works on many levels, from dark comedy to suspenseful thriller to social commentary, but it has a strong Romantic, politically correct, anti-capitalist, misanthropic worldview with lots of strong foul language, extreme violence, some lewd content, and a bitter, hopeless nihilistic streak.

The movie follows a poor family named Kim, living in the slums of a major South Korean city, constantly having to scam free Wifi to survive and always behind on their phones and other bills. The father has lost two businesses. So, the family takes the most menial jobs imaginable and see no hope, until their teenage son Ki-woo (Choi Woo-shik) talks with a wealthier friend who’s about to leave the country. The friend asks Ki-woo to take over his tutoring job for a rich high school student named Da-hye Park. The friend is interested in dating Da-hye when she starts attending college and (rather stupidly it turns out) doesn’t see Ki-woo as a rival to her affections. The girl’s mother is rather naïve, he tells Ki-woo.

The Parks are indeed very wealthy but actually are fairly nice people. They’re also so caught up in their perfect bubble of a life that they’re easily duped, especially the mother. As Ki-woo’s own mother remarks later, however, it’s easy to be nice to other people when you’re wealthy like the Parks

When Ki-woo realizes that they’ve accepted him as a tutor despite the fact he’s not even a good student, he tells his family they can trick their way into other positions on the Park family’s staff. So, Ki-woo’s sister becomes an art therapist for the girl’s precocious little brother, his mother becomes the maid after Ki-woo, and his sister get the current maid sick with a food allergy, and his father becomes the Park family chauffeur when Ki-woo’s sister plants some panties in the back of Mr. Park’s car.

When the Parks go away for a weekend on a camping trip with their son, who’s joined the Boy Scouts, the Kim family really lives it up by getting drunk and gorging themselves. However, then the former maid shows up in the midst of a driving rainstorm and is fiercely determined to open a hidden tunnel in the basement – a tunnel that hides something beyond everyone’s wildest imaginings.

Violence eventually erupts, and no one’s life will ever be the same.

PARASITE becomes a wild thrill ride that’s alternately suspenseful, shocking and funny. South Korean Bong Joon-Ho (SNOWPIERCER, OKJA) has created some of the most wildly unpredictable movies in recent years, and he outdoes himself here. PARASITE works on many artistic levels as a suspense thriller, a dark comedy and, at times, an unexpectedly powerful drama.

At first, it appears that viewers are to sympathize with the poor Kim family, but as the Kim family devolves into ever more horrible behavior, the rich Park family becomes more sympathetic. That makes for an intriguing moral see-saw, but it eventually leaves viewers with no one to root for as the plot unfolds. The movie’s wildly violent finale at a backyard party takes things so over the top that the movie becomes very nihilistic. Some haunting final scenes, however, provide some interesting minor twists, and even a ray of hope, but the hope disintegrates in the movie’s final sad shot. So, eventually, the movie leaves moviegoers with nothing to inspire them.

Ultimately, PARASITE comes across as a misanthropic movie, with a streak of nihilistic outrage. The movie has a strong Romantic, politically correct worldview that sees both the Kim family and the Park family as victims of the capitalist system in South Korea. This system turns poor people into greedy liars, and rich people into demanding snobs. Once the veneer of civilization is removed, however, everyone’s façade of niceness is stripped. When that happens, brutal murder occurs.

These themes might have been turned into a kind of Christian morality play, but neither God nor Jesus plays a role in the story. PARASITE also contains lots of strong foul language, bloody violence and an awkward, uncomfortable sex scene between Mr. and Mrs. Park. PARASITE sometimes arouses sympathy for some of its characters, but, otherwise, it will turn off the average moviegoer.