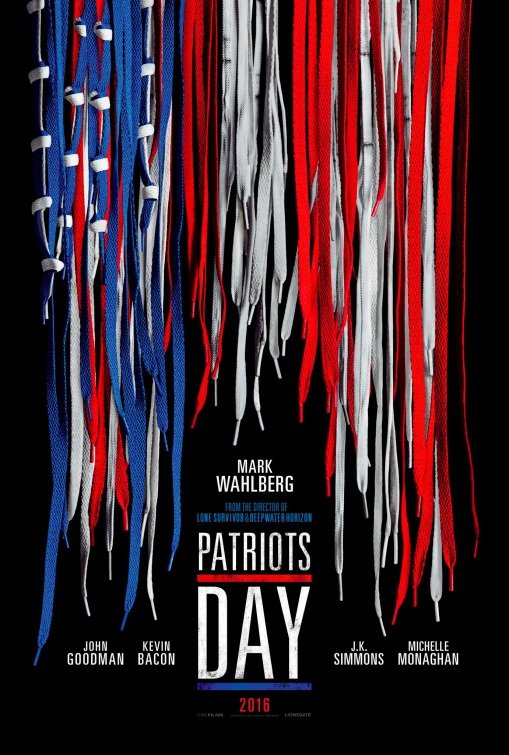 Starring Mark Wahlberg, PATRIOTS DAY is an intense, morally invigorating drama about the Boston Marathon bombing in 2013. The movie opens the day of the bombing by introducing several characters that viewers don’t know are key people in the actual events. Sergeant Tommy Saunders is a Boston police officer trying to work his way “out of the dog-house” for making an unexplained work mistake. When he’s put on security duty at the Boston Marathon and two bombs explode, he’s put at the center of the fight to bring the Islamic terrorists to justice.

Most people know how PATRIOTS DAY ends, but what many don’t know are the stories of the heroes and victims involved. Peter Berg co-wrote and directs his most powerful movie yet. He creates incredibly intense sequences and stirring moments paying tribute to the real people. PATRIOTS DAY is highly patriotic and politically incorrect, with strong or overt references to Christian faith and prayer. Sadly, the movie has many “f” words and some strong gratuitous profanities profaning Jesus, plus some graphic violence. So, MOVIEGUIDE® advises extreme caution for PATRIOTS DAY.

(CC, BBB, PPP, FR, LLL, VVV, S, N, AA, DD, M) Strong Christian worldview with very strong moral, patriotic content about protecting freedom, fighting hate with love, heroism, selflessness, a reference to “God fighting the devil,” a character says “thank God” and wears a cross necklace, a runner crosses himself, the movie honors the police officers and service members, who helped the victims and brought the terrorists to justice, a strong Anti-Islamic terrorist message, some officials worry that calling a bombing Islamic terrorism will bring about “Islamophobia” but this is responded with “we all know what this is,” and footage of Pres. Obama speaking at a church, where he says America’s “prayers” are with the city, plus woman quotes the Qur’an; very strong foul language such as at least 157 obscenities (including at least 127 “f” words) and 13 strong profanities; some very strong and strong violence includes a bombing that leaves many people wounded, limbs are blown off, a foot is seen lying on the street, children are killed, many are shown with gaping wounds, an intense police shoot out leaves multiple people shot, and one man is violently run over by a car; married couple kiss in bed, but camera cuts away, and wife says her husband “turns her on”; upper male nudity; some drinking; no smoking but teenager smokes marijuana from a bong and terrorists are drug dealers; and, a police officer has some issues with authority, but no other immoral or objectionable content.

The movie opens the day of the bombing by introducing several characters viewers don’t know are key people in the actual events.

Sergeant Tommy Saunders (Mark Wahlberg) is a Boston police officer trying to work his way “out of the dog-house” for making an unexplained work mistake. A bit of a drinker and rough around the edges, Tommy loves his wife Carol (Michelle Monaghan) deeply. He’s put on security detail at the Boston Marathon, something he’s been dreading after he banged up his knee the night before.

Jeffrey Pugliese (J.K. Simmons) is the police sergeant of Watertown, a small town outside of Boston. To him, April 15 is just another day. Other key people include Dun Meng, a Chinese student; MIT Security Guard Jake Picking; the Tsarnaev brothers who committed the terrorist attack; and, a couple that just so happened to be watching the marathon next to one of the two bombs.

When the bombs explode, chaos ensues. Sergeant Saunders works to help the victims on the scene. Then, the FBI rolls onto the scene and declares the bombing an act of terrorism. Special Agent Richard DesLauriers (Kevin Bacon) enlists the help of Sergeant Saunders to help give direction on which security camera footage to look at to find the terrorists. Eventually, they have a picture of the two men who set the bombs.

Meanwhile, the Tsarnaev brothers set into motion their next plans, which unfortunately involves some innocent, and heroic, bystanders. As the city becomes more anxious about the Muslim bombers at large, the city officials struggle with how far they should go to find them.

Most people know or remember how PATRIOTS DAY ends. However, what many people don’t know are the stories of the heroes and victims involved, and the incredible unity that resulted from it. Peter Berg co-wrote and directs his most impactful movie yet. He creates incredibly intense sequences and emotionally stirring moments paying tribute to the real people. The ending increases the movie’s incredible impact by featuring extremely poignant footage and interviews from the real people involved in the events portrayed.

Director Peter Berg avoids the politically-correct, offensive cliché of showing empathy for the terrorists who committed the atrocities, making PATRIOTS DAY a traditional good versus evil movie. In an impassioned monologue during the manhunt for the final terrorist, Sergeant Saunders says there’s a war between good and evil, love and hate, and, if we fight back, and continue to love, “there’s no way they could ever win.” Also, the self-indoctrinated Islamic terrorists who were obsessed with pornography and drugs prove to be no match for the heroics of the citizens and first responders in Boston and its surrounding communities. They are shown for the hateful men they were, even purposefully putting the bombs next to children. At one point, when one of the brothers questions whether they should go through with the bombing because he was thinking about the Reverend Martin Luther King, the other brother says, “MLK wasn’t a Muslim.”

The damage done by the bombs is extensive and severe. Some people lose their lives, and many their limbs. However, the story of hope and love continues in those who were affected, as the rallying cry, “Boston Strong,” emerges from the tragedy to signal the love of community and the freedom the city holds onto amid the terrible terrorist attack. There are questionable decisions made by the bureaucrats in charge, including an order to take away one of the terrorists Miranda rights and a point where the city is put on curfew. However, PATRIOTS DAY has some strong, overt references to Christian faith and prayer.

Sadly, lots of obscenities, including many “f” bombs, plague PATRIOTS DAY. This will limit the movie’s appeal to faith-based viewers. Even more frustrating are some gratuitous profane uses of Jesus Christ’s name by a couple police officers. There was no need to include any of this graphic foul language.

Therefore, although PATRIOTS DAY is one of the year’s most inspiring movies, MOVIEGUIDE® advises extreme caution due to the movie’s excessive foul language and some graphic violence.