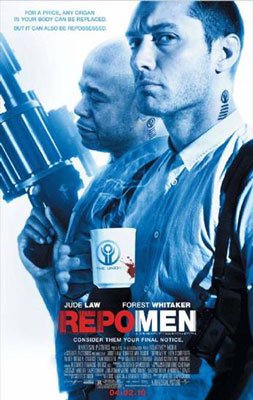 REPO MEN is a very bloody, dystopian science fiction thriller about a man who fights a company that preys on people needing organ transplants. The movie stars Jude Law as Remy, a thuggish family man who makes money by re-possessing artificial organs from people who are more than three months behind in their payments. After he does this, the people die in most cases. Things change for Remy when an accidental shock hits his heart during one repo job. Remy wakes up in the hospital with a new mechanical heart. Now that the shoe’s on the other foot, Remy can no longer do the work that earned him money. When Remy himself cannot make his payments, the hunter becomes the hunted.

Though extremely bloody, REPO MEN has a clever style that is often very effective, with lots of action. The ending doesn’t quite work, however. It veers from silly, unbelievable, bloody ultra-violence to dark, depressing fantasy. The movie also has lots of strong foul language and a Marxist subtext promoting economic determinism. There is also a scene at a strip bar with female nudity. Ultimately, REPO MEN is unpalatable and disappointing.

(HH, Co, LLL, VVV, S, NN, MM) Strong humanist worldview of economic determinism with Marxist, pro-communist, implications; at least 54 mostly strong obscenities and five strong profanities; very strong, often bloody violence with men cutting out artificial organs from people’s bodies, a bloody kneecap operation, man knocked out five times, people stabbed, people’s throats cut, big knife plunged into man’s neck, bloody knife fight with man against other people where blood from gushing wounds often sprays, people shot pointblank, people are tasered, typewriter dropped on a man’s head and a pool of blood forms under the machine, rough martial arts style of fighting, and people cut each other up to disable signals from artificial organs and then use a special gel to seal up the wounds, etc.; implied adulterous sex and depicted adulterous kissing, though man’s wife has kicked him out of the house and seems to want nothing more to do with him; shots of upper female nudity in strip bar and some shots of upper male nudity; alcohol use and slight drunkenness; minor character puts some kind of red-powdered drug up his nose; and, callous disregard for human life but it is sometimes rebuked (depending on whose ox is being gored), wife kicks husband out of house because she does not like his job with little effort shown on her part to reconcile the situation in any way, and slick sales talk to make people buy things they cannot really afford but that is rebuked by the movie’s storyline.

REPO MEN is a very bloody, dystopian science fiction thriller about a man who fights a company that preys on people needing organ transplants. The ending doesn’t quite work, veering from silly ultra-violence to dark, depressing fantasy. There is also lots of strong foul language and a Marxist subtext in the movie.

Based on a novel, the movie stars Jude Law as Remy, a thuggish family man who makes money by re-possessing artificial organs (or artiforgs) from people who are more than three months behind in their payments. Remy and his partner Jake (played by Forest Whitaker in another compelling performance) work for The Union, the company that makes and sells the artificial devices. Remy and Jake’s boss, Frank, spends his time duping sick people into buying artificial organs they cannot really afford (like the banks, mortgage companies, and government loan companies Fannie Mae and Freddie Mac in this century’s housing market). Of course, when Remy and Jake pull the organs from the sucker’s body, the person usually dies.

Remy’s wife Carol wants him to get out of the repo business and become a salesman instead. Reluctantly, he agrees, but decides to pull one last job repossessing the heart of a wealthy musician who got into trouble with the IRS. When Remy goes to defrib the man’s heart, however, he is knocked out cold. The next thing he knows, he wakes up in the hospital with a new artificial heart from his boss, who expects Remy to pay for the organ by selling more artiforgs.

Now that he’s on the other side of the equation, however, Remy cannot force himself to repossess organs or even sell them. Meanwhile, his wife is angry that he took the one last job and kicks Remy out of the house.

Remy finds refuge with a boozy female singer he admires named Beth, who herself has several artificial organs she can’t afford. He tries to protect her and himself from the other repo men, which leads to a series of fights and near escapes. Conversely, she shows him ways to avoid the electronic signals in the organs leading the repo men to their victims. Eventually, however, Remy and Beth decide the only thing that can be done is to take down The Union, get into the mainframe computer, and cancel out all of the artiforg accounts.

Though very bloody, REPO MEN has a dystopian style that is sometimes very effective, with lots of action. The acting is exceptionally good, especially Forest Whitaker as Jake. However, the third act devolves into silly ultra-violence, followed by a final plot twist that is dark and depressing. This is not a movie for media-wise or sensitive viewers who expect something more inspiring and uplifting, or something not quite so bloody and foul-mouthed.

It may be said that REPO MEN has an anti-capitalist tilt, but the name of the company in the movie is The Union and the movie avoids making any overt political statements (but, please see our CONTENT section above for a fuller description of the themes and content in the movie). Even so, it’s sure that those supporting a complete overhaul and government takeover of America’s current healthcare system will probably use REPO MEN’s fantastic, leftist-oreinted storyline as more fodder for their villainous cause. Don’t let them.

The current hysterical concern about America’s healthcare system is a venal attempt by Neo-Marxist liberals and leftists to increase the federal government’s control over you and your family, not to mention your doctors, dentist, surgeons, and local hospital. It’s an oft-cited aphorism that says, “You don’t have anything if you don’t have your health.” This is certainly true, especially in the case of costly chronic health problems, major surgery, and debilitating illnesses. But, it is a well-established fact that it is actually the state and federal government’s meddling in the healthcare field, through complicated instruments like Medicare, Medicaid, and convoluted prescription drug laws, that has driven up the cost of healthcare, just as it has driven up the cost of college tuition through guaranteed student loan programs. And, all the taxes for all the other unsustainable, utopian schemes of Big Government have sapped the strength of business and families to pay for health insurance and medical fees. Because of all of this incompetent meddling, the days of the friendly personal doctor making house calls and the positive hospital experience are gone. The result is that being a doctor is really no longer an honorable profession. Doctors are now called “healthcare providers” and, if the liberals and leftists have their way, they will now serve at the tyrannical rule of the Leviathan State. As President Ronald Reagan said, “Government is not the solution to the problem; it is the problem.”

While REPO MEN avoids making overt political statements, it does present a dark world where people are bombarded by advertising in the streets and conmen trying to take money from your wallet until you are of no further use. When the latter happens, they would rather kill you than keep you alive. Such a world is, of course, a Marxist, humanist vision of economic determinism. Thus, although REPO MEN does not overtly promote any socialist or communist solutions to the dark vision it presents, it certainly provides fodder for those who do.

REPO MEN also has a plenty of strong foul language and a scene set in a strip bar with brief female nudity. Ultimately, REPO MEN is unpalatable and disappointing.