"Birth of the Me Too Movement" 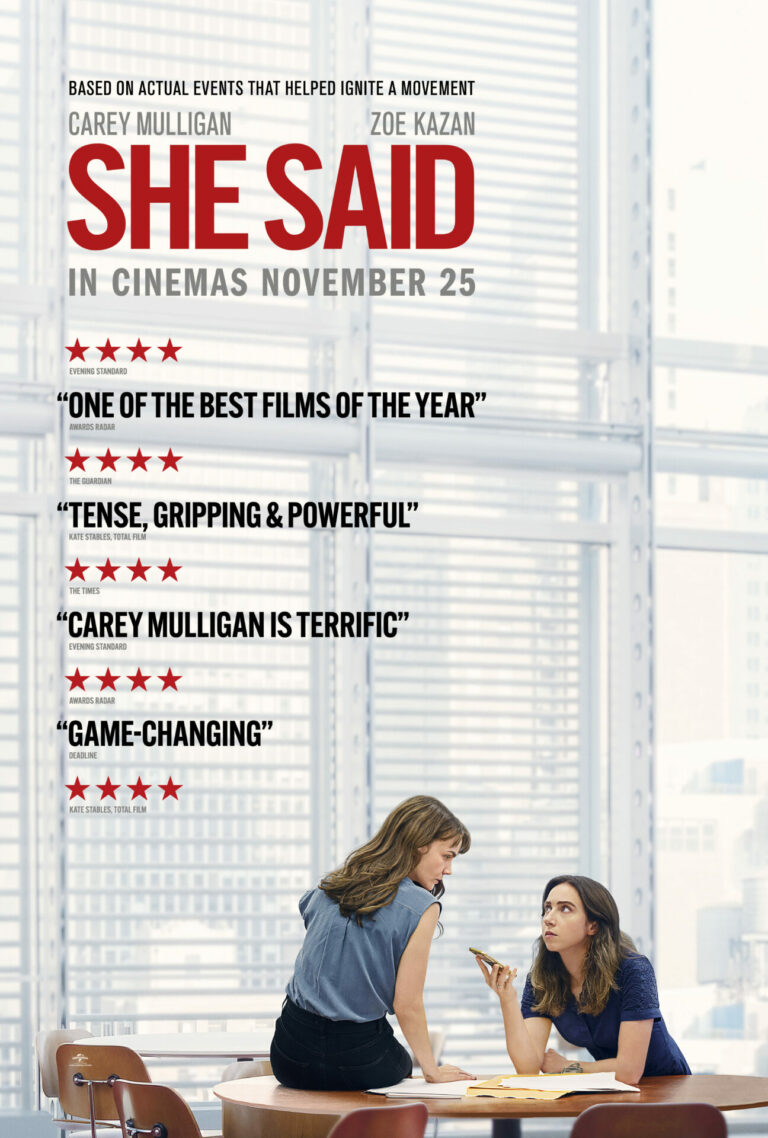 SHE SAID follows New York Times reporters Megan Twohey and Jodi Kantor as they try to expose Hollywood mogul Harvey Weinstein for his years of sexual abuse of women. Both Megan and Jodi must balance their jobs at the Times with their lives as wives and mothers. The movie shows the lengths they must go, traveling across seas, tracking down people, constant phone calls, and late nights with little sleep, to expose Weinstein’s alleged crimes. Their efforts lead to the start of the Me Too Movement against sexual harassment.

SHE SAID is a slow-moving movie, with repetitive shots where the journalists interview victims and people who work for Weinstein in various restaurants. The movie sometimes feels more like a documentary rather than a dramatic feature. However, the conversations are engaging, and the acting and production values are top notch. The movie includes true accounts from Ashley Judd, Gwyneth Paltrow and Rose McGowan about Harvey Weinstein’s behavior. SHE SAID is an informative, educational drama about Hollywood corruption. MOVIEGUIDE® advises extreme caution, however, for strong foul language and graphic discussions of sexual abuse.

(BB, Pa, LLL, SS, N. A, MM):
Dominant Worldview and Other Worldview Content/Elements:
Strong moral worldview shows two female journalists risk everything, even their lives, to bring justice to formerly abused women and stop the corruption and abuse by a Hollywood mogul, journalists rebuke hatred, sexual misconduct and immorality to bring truthfulness and justice to women hurt and tormented by the mogul, plus mogul believes he can do whatever he wants to women, including abusing and raping them without any consequences for his actions, and mogul worships himself and his power
Foul Language:
About 31 obscenities (mostly “f” words) and three light profanities
Violence:
No violence
Sex:
No sex scenes depicted, but horrific recounts of women being sexual molested and raped by Harvey Weinstein (women tell their stories over the phone and casual lunches, but nothing is shown), plus light kissing between husband and wife
Nudity:
Brief upper male nudity in one scene
Alcohol Use:
Light social drinking, journalists have a glass of wine at a restaurant, scenes of parents and journalists having a glass of wine after a long day or when stressed
Smoking and/or Drug Use and Abuse:
No smoking or drugs; and, Miscellaneous Immortality: Strong references to abuse of power, lies and threats.

SHE SAID is an inspiring true story that shows what lengths journalists, Megan Twohey and Jodi Kantor, had to go through in order to report, and eventually expose, Hollywood producer, Harvey Weinstein, for the years of sexual abuse he inflicted on women. SHE SAID is a slow-moving movie and feels too much like a static documentary, but the conversations are engaging, and the acting and production values are top notch, though there’s some strong foul language and adult content about abuse that warrant extreme caution.

SHE SAID first introduces Twohey, a seasoned reporter at The New York Times. Twohey loves her job but is also trying to become a mother. In a series of quick shots, the movie reveals Twohey getting pregnant, giving birth and falling into postpartum depression. Her boss asks if it would help Twohey if she came back to work to work on a piece about sexual misconduct in the workplace. Twohey eagerly agrees. Work would certainly help her get through her postpartum depression. Thus, she hops on board the story, partnering up with a newer journalist, Jodi Kantor, to tackle the story.

Kantor, a younger journalist at The New York Times, is also trying to find balance in her own life. She’s the mother to two young girls and a wife, but the long hours that her work as a journalist demand don’t make finding balance easy. Nevertheless, like Twohey, she loves her job and thrives in it. Having reported on sexual misconduct in other workplaces and seeing visible change occur as a result of her reporting, she’s committed to expose the corrupt powerful figures in Hollywood, in particular Harvey Weinstein. Twohey and Kantor team up to report this story, but what they couldn’t have predicted is the perseverance, grit, push back, threats, and constant setbacks they will have to endure for trying to call out one of the most powerful producers in Hollywood.

As Kantor and Twohey commit to write this story, the movie morphs into a game of Clue, where an interview with one woman leads them to another and another, as they aim to crack the case of how and why Weinstein has been able to get away with so much abuse for so long. Eventually, the journalists learn that Weinstein and his company paid off 8-12 women to remain silent about the sexual abuse they experienced at his company. When Kantor and Twohey find these women, it becomes evident how much trauma they all still live with due to their time working at Weinstein’s company. Many of the women still live in perpetual fear, and every single one of them, after leaving Weinstein’s company, was blacklisted from Hollywood, never to be hired in entertainment again, because the tagline that followed them was that, if you didn’t last at Weinstein’s company, the most powerful production company in Hollywood, you certainly couldn’t last at any other company.

The women interviewed, from A-list actress like Ashley Judd, Gwyneth Paltrow and Rose McGowan, to former assistants of Weinstein, all give graphic depictions of exactly what Weinstein did to them. This allows viewers to really feel the terror and horrific situations these women experienced. Weinstein demanded back massages, showers and that that the women dressed him, all the while reminding them that this was the job of an actress or an assistant, and “everyone does it.” The women who did speak up, including Judd and McGowan, resulted in no action, thus further silencing the masses of women who had been abused by Weinstein, believing what good would it do to use their voice anyway?

Eventually, Weinstein gets word of the article being written and demands the journalists to stop. When they don’t, he hires a cynical female who starts to call each woman they know the New York Times has been in contact with and demands them not to speak. Being that many of these women are older and wiser, they recognize this bullying tactic, and it enrages them. This finally gives many of them the push to finally agree that the journalists can use their name and quote them in the New York Times article.

When the journalists publish the report on abuse in Hollywood and at Weinstein’s company, the “Me Too Movement” launches shortly after. Also, while the journalists had evidence of at least 8-12 women being abused, when the piece is published, 82 more women come forward, expressing how Weinstein trapped and raped many of them, all which eventually resulted in Weinstein being sentenced to prison for 23 years, where he remains today.

SHE SAID is a powerful true story, and while it’s one thing to read about it this, it’s another experience to watch it, to feel these women’s pain, fear and trauma. Although the movie sometimes drags on with a limited range of unique shots and scenes, the content is compelling. SHE SAID does have a strong moral worldview. However, extreme caution is advised because of strong foul language and graphic discussion of sexual misconduct and abuse.