"A Group of Movie Actors Get Lost in a Pandemic Bubble" 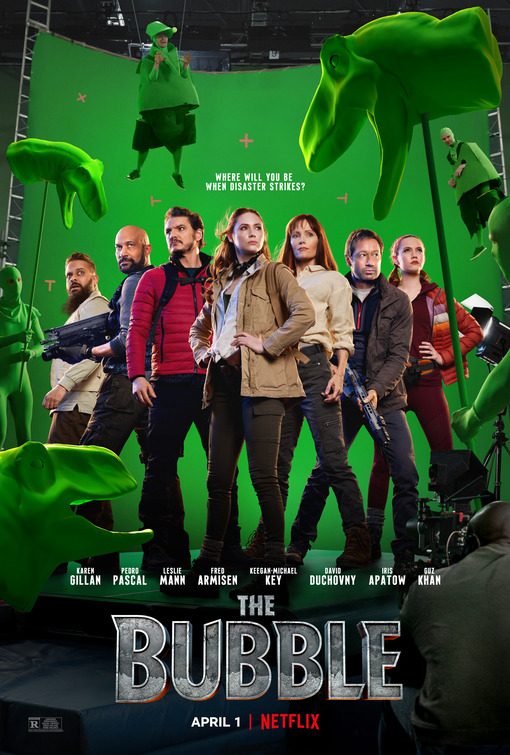 THE BUBBLE is a Netflix comedy about a group of actors stuck inside a London hotel during a COVID lockdown while they make the sequel to an action franchise film. The actors can’t stand to be locked up for two weeks, due to the lockdown, so they do over the top things to get through this idea of being stuck with yourself for two weeks. They have sexual affairs with people they barely know, they take cocaine, they walk off set knowing they could pass Covid along to others as a result, and they drink a lot.

At first glance, the story to THE BUBBLE could be promising, but the movie tries to be funny through a constant series of shock factors that lack creativity and become exhausting to watch. In fact, every scene is more cringe worthy than the last. Also, none of the characters in the movie are likeable. Media-wise viewers won’t want to waste their time with THE BUBBLE. It’s an abhorrent movie with strong immoral Romantic, pagan content, including heavy drug use, graphic bloody violence, drunkenness, sexual promiscuity, and abundant foul language.

RoRo, PaPa, FR, AbAb, LLL, VVV, SS, AA, DDD, MMM):
Dominant Worldview and Other Worldview Content/Elements:
Strong Romantic worldview implies man (these actors) were essentially good, but society has corrupted them over time, and the actors are controlled by their emotions and desires, not by any morals or virtues, plus one actor on set has created his own religion and is encouraging others to hop on board by advocating for his “bible” that he wrote himself (later it’s revealed he had a ghost writer write this bible for him) and some strong pagan elements display the worship of anything goes, and sensual pleasures, fame and material goods are at the forefront of what these across live for, and it’s all as empty-hearted and empty-headed as it sounds
Foul Language:
At least 135 obscenities (about half or more are “f” words), nine strong profanities, 19 light profanities, actors throw up on each other, one actor throws up in another person’s mouth, and a man holds the hand of another man who’s having diarrhea
Violence:
Extreme graphic violence, bloodshed and physical violence, plus some strong violence, includes scenes of a bloody human head being eaten by a dinosaur, shots of a dead and bloody human body, dinosaur rips apart human bodies, and actors fight and kick each other
Sex:
Implied and depicted sexual immorality and promiscuity, actor has sex with a stranger in her bed, actor engages in sex with a pillow in his bedroom, on older man asks everyone in the hotel to sleep with him, an older man asks a younger woman to have a one night stand with him, couples cheat on each other, and actors sleep with other people despite the fact the people have spouses, boyfriend brings home a waitress and fornicates with her in his girlfriend’s bed, provocative TikTok dancing by one man’s 19-year-old daughter, and many crude references to sex, including self-abuse
Nudity:
No nudity
Alcohol Use:
Heavy drinking and alcohol, actors drink excessive alcohol, champagne, wine, and cocktails to get through the pandemic
Smoking and/or Drug Use and Abuse:
Extreme drug use where actors do cocaine and other illegal drugs to feel more alive because of being on COVID lockdown; Miscellaneous Immortality: Lying, quarantined people walk off set and leave hotel knowing they could pass Covid along to others as a result, two 19-year-old leave London hotel to party in the city, and adopted daughter overhears parents say they think they chose the wrong daughter.

The BUBBLE is categorized as a satirical comedy, written and directed by Judd Apatow, but there are very few scenes worth a laugh. Streaming on Netflix, the movie follows a series of actors who have signed on to film a sequel to an action franchise film about dinosaurs.

The main character is Carol Cobb, who loathes the empty, repetitive plotlines in franchise films. She only signs on to do this movie because her last film flopped after she, as a Caucasian woman, played the role of a Pakistani woman and offended half the world. Consequently, her agent constantly reminds her that, if she doesn’t do this movie, her career would be finished.

Carol arrives in London to a swanky hotel, where she and the other actors must quarantine for two weeks, before they start shooting. During this period of isolation, the actors start to fall apart. Carol eats her feelings and does the same workout videos. She calls her terrible boyfriend, who’s living in her house that she paid for, only to discover that he couldn’t stand being sexually inactive for so long, so he picked up a waitress and is now sleeping with her in Carol’s bed. This is only the beginning of the movie, and with Carol as our “protagonist” it becomes an even longer ride from here.

After the two-week quarantine, shooting begins and the movie slowly introduces the other characters, who are also all terribly flawed with few redeeming qualities. There is Howie, a Middle Eastern man with a big ego. During a meditation session, he can’t stand it and fires off a string of f-bombs, karate kicks another actor and leaves the set. Krystal, a 19-year-old teenage TikTok superstar, and her friend, Carla, a mellow, depressed kid, are only there because Krystal’s father is the movie’s stunt coordinator. She and Carla sneak out to the city to party for a night, putting everyone at risk for Covid.

Then, there’s an older actress, Lauren Van Chance (played by Judd Apatow’s wife, Leslie Mann), who’s obsessed with herself and fooling around with her ex-husband, who’s also an actor on set. The divorced couple have many steamy love sessions where they aim to talk through what went wrong in their marriage. Here it’s revealed that Lauren’s husband slept with almost every close woman in his wife’s life, and the foster child they adopted together is not their favorite. They feel like they chose the wrong kid. Of course, their phone is on speaker when this happens, and their adoptive child hears this, which is terrible on all accounts.

These messy characters continue to dominate the screen. There is Sean Knox (Keegan-Michael Key) who founded his own religion and wrote his own bible, but he assures his fellow actors it’s not a cult. Then there’s Dieter Bravo (Pedro Pascal) who only has sex on his mind and is willing to sleep with anyone, man or woman. In the end, he engages in sexual activity with his pillow after he takes a few too many drugs.

These over the top, empty scenes with the actors are cut between takes of the actors filming sequences for the sequel to this giant movie franchise about dinosaurs on a giant green screen. However, as various actors continue to get Covid or walk out on production, the “movie” they are filming loses people by having the dinosaurs just eat them to eliminate their scenes.

The only character worth a watch is the studio executive, played by Kate McKinnon, who plays a self-indulgent, over the top woman who is “having such a hard time with the pandemic” while she’s currently skiing on some mountain slopes in Europe. She enters every so often to deliver a note to the set, which leads to a few laughs.

Meanwhile, Carol is the voice of reason in the story. She questions why people are being forced to film after they test positive for Covid, why they must do unsafe stunts led by a stunt coordinator on Zoom, and why her lines keep being cut because she’s speaking up more.

[SPOILERS FOLLOW] In the final scene, the actors band together to fight against the studio executives whom they feel are being cruel to them. They decide it’s inhumane to have them locked up here for so long to shoot a terrible movie and be forced to work, after many have been tested for COVID. They escape in a helicopter, which none of them know how to fly, and get away. The movie finally comes out two years later, but it’s the behind-the-scenes footage that make the movie a success, not the actual movie they filmed.

At first glance, the story to THE BUBBLE could be promising, but the movie aims to be funny through a constant series of shock factors that lack creativity and become exhausting to watch. The actors can’t stand to be locked up for two weeks, due to the quarantine, so they do over the top things to get through this idea of being with yourself for two weeks. They have sexual affairs with people they barely know, they take cocaine, they escape the hotel and go to party in the city, they walk off set knowing they could pass Covid along to others as a result, and they drink a lot.

A big problem with THE BUBBLE is that there isn’t one likeable character, and it’s hard for a viewer to remain engaged in a story when there isn’t anybody he cares to succeed. The movie aims to show how challenging it is to be in a quarantine “bubble,” but the film actors get to stay in lavish hotel rooms, eat and drink whatever they want, and they are getting paid big bucks to essentially run around on a green screen. THE BUBBLE aims to make a “funny” statement about the actor’s problems not being real problems at all, but it fails to do so because nobody will cares about these characters in general. Also, Writer/Director Judd Apatow’s daughter plays the role of the “TikTok star,” but to watch a 19-year-dance around in skimpy clothes, knowing it’s the director’s daughter, leads to a series of unsettling thoughts that immediately take one out of the movie.