THE CHILDREN OF HUANG SHI 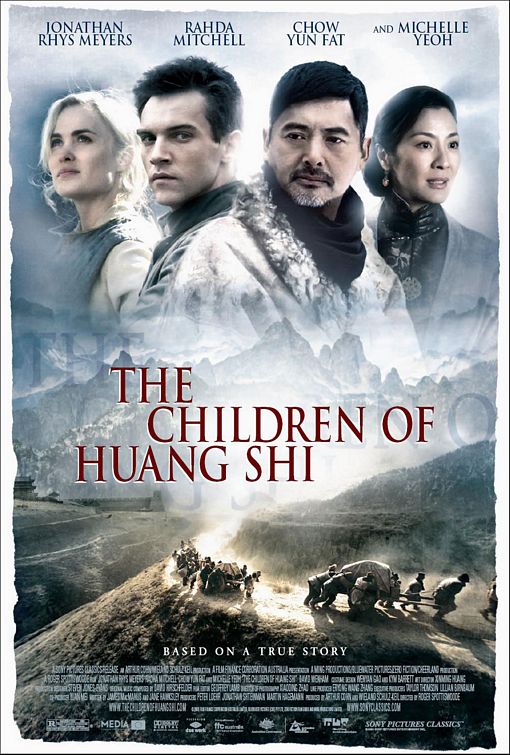 THE CHILDREN OF HUANG SHI is the truncated story of George Hogg, a socialist pacifist from England who became the headmaster of a Communist-run school for boys in China during World War II. Hogg led the boys in the school on a long trek through wintry mountains and deserts to escape from the Japanese army. He also did it to find a safer haven for the continued education and socialist indoctrination of the boys. The movie minimizes Hogg’s documented links to the Chinese Communist Party, but there is a Communist general who helps Hogg and a beautiful nurse spirit the children away. Of course, Hogg has an affair with the nurse, who has a dark secret that endangers their work.

CHILDREN OF HUANG SHI is beautifully photographed and well acted, but its truncated history blurs and conceals Hogg’s motivations in helping the boys. Thus, viewers may be left scratching their heads wondering where Hogg’s huge compassion originates. The movie does give a positive portrayal of the Communist general, however. This portrayal and the movie’s revisionist history warrant a strong negative rating. The movie’s not good enough to receive a strong commendation.

(HH, CoCo, So, RHRHRH, B, Pa, FR, LL, VVV, S, N, A, DD, M) Strong, but not didactic or strident humanist worldview about an historical figure with some pro-Chinese Communist and pro-socialist content but very strong revisionist history that conceals the protagonist’s apparently left-leaning politics, plus some moral elements that include strong displays of compassion but with little or no discernible philosophical foundation, which may leave viewers wondering, plus Buddhist pagan scene where boys pray for good crops; 10 obscenities, five strong profanities and five light profanities such as Good Lord and My God; brief very strong and strong violence such as point blank shootings, Japanese troops massacre Chinese peasants in one scene, man almost beheaded, battle scene with explosions and gunfire, two men executed, boys beat up man, implied suicide by hanging oneself, soldiers beat man, and cart crushes teenage boy to death; implied fornication in two scenes; brief upper male nudity; alcohol use; smoking, depicted opium use in opium den and leading female character addicted to morphine but goes through withdrawal; and, wild boys rebel against authority figure trying to help them and vandalism.

THE CHILDREN OF HUANG SHI is the truncated story of George Hogg, a socialist pacifist from England who became the headmaster of a Communist-run school for boys in China during World War II. Hogg led the boys in the school on a long trek through wintry mountains and deserts to escape from the Japanese army bearing down on the school. He also did it to find a safer haven for the continued education and socialist indoctrination and education of the boys.

The movie minimizes Hogg’s connections to the Chinese Communist Party that was fighting the Japanese invaders while continuing to make socialist changes to the countryside, including teaching the boys how to become part of the Party’s “cooperative” movement at the time. It also makes drastic changes to Hogg’s story, including the reason why the school was set up.

This only serves to blur and conceal Hogg’s motivations in going out of his way helping the boys at the school. The movie vaguely indicates that it was due to Hogg’s increasing pacifism, but even that is left unclear. Thus, the average viewer may leave the movie theater scratching his or her head about Hogg’s motivations. It also may distance them from the story and its characters, which is well filmed and acted.

Be that as it may, the movie does show Hogg having a long-term relationship with a Communist Army officer. Also, the Nationalist Chinese Army officials, who opposed the Communists then and even more so after the war are not portrayed in a good light. In that sense, the movie’s Communist, socialist leanings do come through slightly in this portrayal. Because of this, and the movie’s strange revisionist history of Hogg’s real biography, THE CHILDREN OF HUANG SHI warrants an excessive rating.

Of course, ultimately Marxism, and its divergent ideology Maoism, has little or no rational foundation for the compassion and moral indignation they apply when they talk about humanity, including the alleged exploitation of the working class or “proletariat.” In Biblical Christianity, however, morality and ethics are based on the eternal, transcendent ethical/moral character of God, as expressed in God’s Holy Word, the Bible, which is our ultimate moral, metaphysical and theological authority or guidebook. A Marxist might tell you that their morality and policies are based on a rational, objective scientific investigation of life as it truly is, but a truly rational, objective and scientific investigation of life as it truly is can actually reveal the superiority of the Bible and the superiority of Jesus Christ and His Gospel.