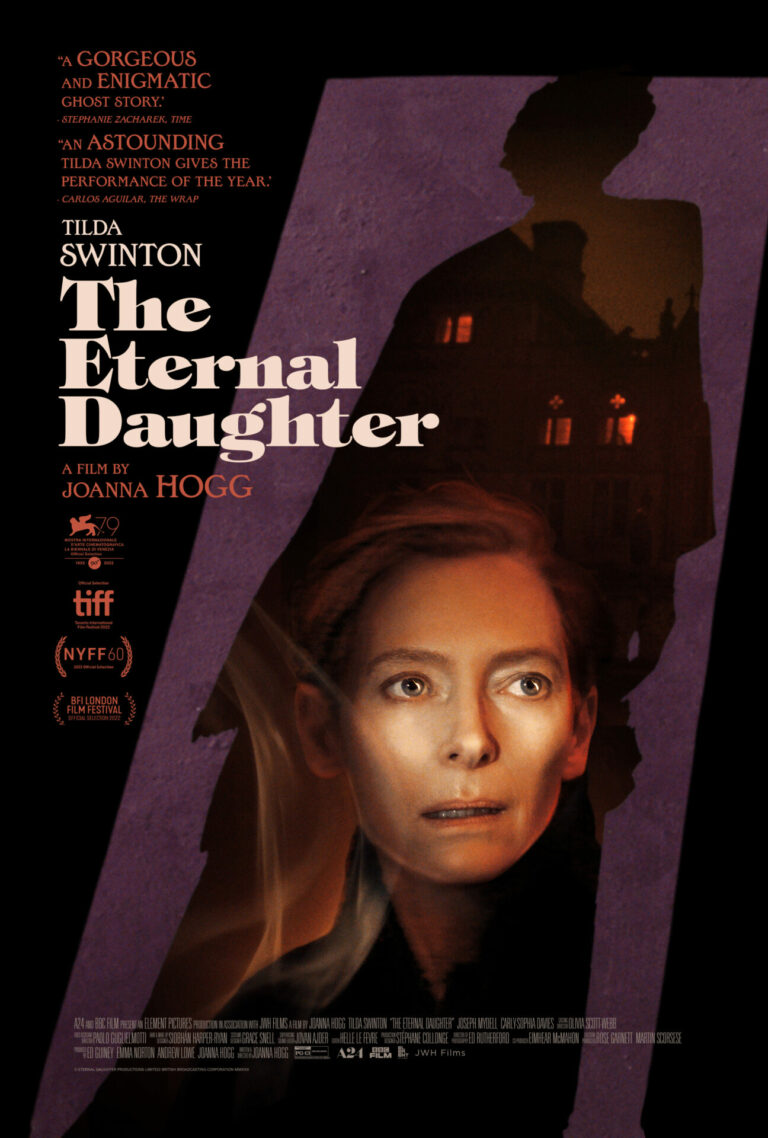 THE ETERNAL DAUGHTER is a subtle drama starring Tilda Swinton, who plays both a middle-aged British filmmaker and her elderly mother. Julie and her mother, Rosalind, return to an aunt’s family manor in Wales, now converted into a hotel. Rosalind lived there as a child during World War II and shortly afterwards. They’re celebrating Rosalind’s birthday. During their stay, Julie and Rosalind have emotional encounters with the ghosts of the past, present and future.

THE ETERNAL DAUGHTER is meticulously crafted, but slow moving, with a tour de force performance by Tilda Swinton playing both the mother and the daughter. The movie is filmed like a ghost story, with the daughter hearing strange noises and light moans as she wanders the hotel. However, it plays more like a drama about past, present and future fears and personal regrets. It also depicts, though, the innate connections and love that exist between mothers and daughters, and that sometimes even fashion their identities. In the end, THE ETERNAL DAUGHTER leaves viewers with a strong feeling of the complicated bonds, including love, that exist between mothers and daughters.

(BB, C, L, M):
Dominant Worldview and Other Worldview Content/Elements:
Strong implied moral worldview about the strong but complicated bonds, including love, between mothers and daughters, with the daughter in the movie seen as something of an archetypal representative for many, and even all, daughters, plus two references to Christmas, including one to sending Christmas cards
Foul Language:
No obscenities, four light profanities (such as OMG), and woman mentions going to “pee”
Violence:
No violence
Sex:
No sex
Nudity:
No nudity
Alcohol Use:
Brief wine consumption
Smoking and/or Drug Use and Abuse:
No smoking and no illicit drugs, though elderly woman takes a sleeping pill each evening; and,
Miscellaneous Immorality:
Young female desk clerk is a bit rude toward the title character in the beginning, but shows sympathy for her as the movie progresses.

THE ETERNAL DAUGHTER is a subtle drama about a middle-aged British filmmaker and her elderly mother, who return to an aunt’s family manor in Wales, now converted into a hotel, for a short holiday and have subtle encounters with the ghosts of the past, present and future. Meticulously crafted, THE ETERNAL DAUGHTER is filmed like a ghost story, with Tilda Swinton playing both roles in a tour de force performance, but it plays more like an emotional drama about past, present and future fears, personal regrets, and the innate connections and love that exist between mothers and daughters and sometimes even fashion their identities.

The movie opens with Julie and her mother, Rosalind, in a taxi arriving late at night at the isolated hotel. They are accompanied by Rosalind’s large brown and white cocker spaniel, Louie. The young female desk clerk is rude and less than helpful about Julie’s missing reservation. Reluctantly, she books them one room for one night, even though there seems to be no one else staying at the hotel.

Julie and her mother settle into their room. During their stay, Julie hears strange noises and rattles, especially at night, and senses a vague ghostly presence in a collection of windows on the ground floor. She also befriends the middle-aged caretaker of the hotel, Bill, a widower whose wife had also worked there as the chef for 30 years. He tells Julie he picked up the flute after she died and sometimes likes to play it for her while working in the office or the kitchen. “It’s like a new chapter in our relationship,” he says.

The conversations between Julie and her mother reveal that Julie planned the stay at the hotel as a birthday present for her mother. Later, however, Julie learns her mother has some bad memories about living in the old family manor when she was a child during World War II. The information makes Julie regret booking the hotel for the birthday celebration. She starts crying, but Rosalind comforts her and dismisses her concerns. She says every place has good and bad memories.

During their stay, Julie sets up a little office in the day to write her next film project. She tells Bill but not her mother that the project is a film about her relationship with her mother. She confides in him that it’s not easy, because she doesn’t know if she has the right to do such a thing.

THE ETERNAL DAUGHTER is like an uneventful character study. The ghostly sequences of Julie roaming the hotel and walking the grounds with the dog are more like a metaphor for her relationship with her mother and her mother’s memories of the hotel. Two quick flashes are a closeup of Julie grasping her mother’s hand. The secret of that hand clasp is revealed at the end.

In the end, the movie leaves viewers with a strong feeling of the complicated bonds, including love, that exist between mothers and daughters. The movie’s title, THE ETERNAL DAUGHTER, focuses, however, on daughters. As Julie tells her mother and Bill during the movie, all she wants is for her mother to be happy. Sometimes, though, Julie’s desire for her mother’s happiness turns her into a “fusspot,” a word the mother uses to describe Julie when Julie runs off to get her mother a scarf because she has a chill. In a way, the movie’s title describes Julie as an archetypal symbol for many, and even all, daughters.

THE ETERNAL DAUGHTER has no obscenities, crude scenes or scary manifestations of ghosts. It’s more about the metaphorical ghosts of the past, present and future between and within parents and children. It’s a movie for adult family members. THE ETERNAL DAUGHTER will have emotional resonance particularly for mothers and daughters, but fathers and sons may also find it an emotional, rewarding experience. Love ultimately prevails. The movie does move rather slowly, however.