THE FAVOR, THE WATCH AND THE VERY BIG FISH 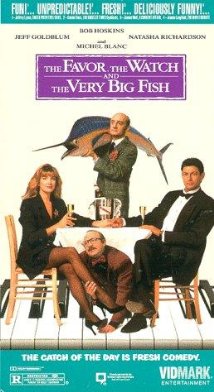 THE FAVOR, THE WATCH AND THE VERY BIG FISH depicts a religious photographer named Louie Aubinard, who searches for a model to pose as the crucified Jesus to advertise his company's devotional products. With many perverted God concepts, the movie may breed religious hatred and stereotyping.

THE FAVOR, THE WATCH AND THE VERY BIG FISH depicts religious photographer Louie Aubinard, searching for a model to pose as Jesus to advertise his company’s devotional products. In a dubbing session for a porno movie, Louie and Sybil become friends. Sybil recalls promising to fornicate with a pianist at a tearoom to absolve his depression. She never does, but Pianist peers into Louie’s company’s office window, looking like Jesus and is hired for a photo session. Wearing a crown of thorns, Pianist hangs on a cross, which the camera pans upside down. His image is plastered to Bibles, commercials and artifacts. Pianist becomes serious and starts performing miracles. When Louie tells him, “I’ve got my doubts,” Pianist begins to walk upon a nearby pond. Eventually, he sinks and drowns.

Clearly, this film mocks Christianity, portraying faith as magical thinking, superstitious and distorted. Like Pianist, who believes he is Jesus, the audience may be deceived. However, the film does have dynamic characterizations and an ingenious script. Thus, the bottom line: Anyone watching THE FAVOR, THE WATCH AND THE VERY BIG FISH should keep in mind that this is not Christianity.