THE FOG OF WAR 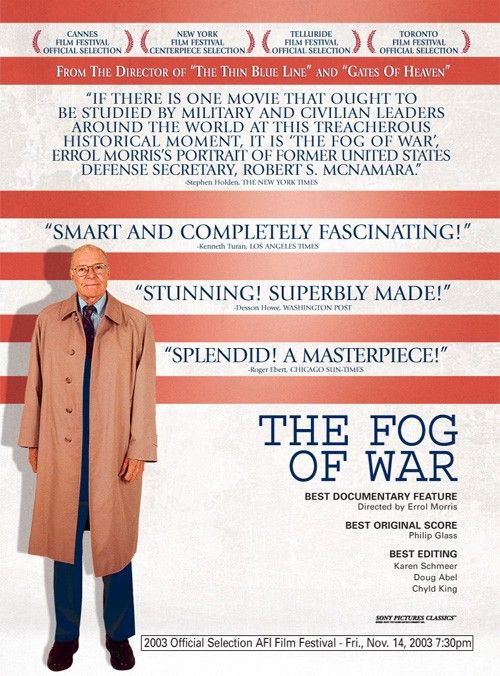 THE FOG OF WAR presents a disappointing, inconclusive, and at times misleading interview with President Lyndon Johnson’s Secretary of Defense during the Vietnam War, interspersed with archival footage.

(H, Co, RHRH, B, LLL, VV, D, M) Humanist worldview, with some muddled pro-Communist elements regarding the leaders of North Vietnam who conquered South Vietnam, and some revisionist history regarding World War II and the Vietnam War, as well as some moral elements, including a biblical view of human nature; 26 obscenities (no “f” words), three strong profanities, and five light profanities; violent footage, some of it disturbing, of World War II and the Vietnam War, but nothing very graphic or bloody; no sex or nudity; no alcohol; smoking; and, man obfuscates his controversial role in government.

Subtitled “Eleven Lessons from the Life of Robert S. McNamara,” THE FOG OF WAR presents a disappointing, inconclusive, and at times misleading interview with President Lyndon Johnson’s Secretary of Defense during the Vietnam War, interspersed with archival footage. The documentary also deals with McNamara’s stint during the American fire bombing of Japanese cities during World War II and his work for the Ford Motor Company after the war. The 11 lessons range from “Empathize with your enemy” to “You can’t change human nature” to “There’s something beyond oneself.”

Laced with plenty of mostly light foul language, THE FOG OF WAR is ultimately disappointing because it often stops short of making real revelations about McNamara’s experiences. For example, the lesson on moral philosophy and religion shows papers from McNamara’s days as a philosophy student with phrases like “Supreme Good,” “God’s mind,” and “Be good,” but nothing more is said beyond that. No further discussion is made other than the title of the lesson, “There’s something beyond oneself.” Also, in one important taped conversation with President Johnson about the Vietnam War, McNamara seems to argue against escalation, but the movie cuts the tape short when Johnson asks McNamara for another solution to the Communists’ infiltration of Vietnam. McNamara says in the movie that he argued for withdrawal, but, when Johnson made the exact opposite decision, he felt it was his duty to carry out the President’s orders as well as he could. Apparently, he didn’t do such a good job.

One of the most interesting parts of the documentary, however, is when McNamara describes the scientific approach he and Gen. Curtis LeMay took when firebombing Japanese cities during World War II. Such massive bombing campaigns of civilian areas during wartime raises appropriate ethical questions, even if the war is morally justified. Even so, an armed invasion of Japan would most likely have killed just as many Japanese civilians, perhaps more, as well as thousands of American soldiers. Of course, this movie neglects to mention that important fact.

Although the section on human nature shows the truth that human nature is both sinful and violent, it fails to consider the fact that a personal relationship with God through Jesus Christ can indeed change human nature. The movie also buys into North Vietnam’s Stalinist lie that it was just waging a war of national liberation. In reality, America’s efforts in Vietnam, though a failure on the ground, halted (for a time) the Communist advance in Southeast Asia, eventually enabling Asian nations like Taiwan, South Korea, Japan, and Hong Kong, to become thriving capitalist democracies.

Much more could be said about all the things this documentary tells viewers. Ultimately, however, THE FOG OF WAR simply provides a way for McNamara to rescue his failed reputation. It fails to give viewers the kind of insights they need to make an informed judgment of the man and his controversial government career.