"Strive To Do Something Big" 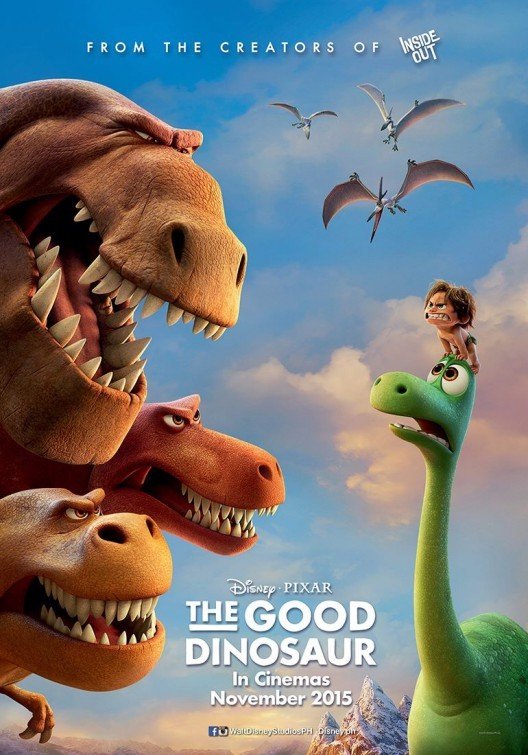 THE GOOD DINOSAUR is an animated adventure from Pixar and Disney about Arlo, a timid dinosaur who goes on a big adventure to find his family. Everyone on Arlo’s family farm makes a mark, showing they have done something greater then themselves. When Arlo tries to do the same, his father ends up dying, and Arlo gets lost. Arlo has to stand up to his fears and try to make it home to his family before the first snowfall.

THE GOOD DINOSAUR has beautiful animation, many entertaining moments and a moral worldview, but feels a little long at parts and may be scary for younger children. It has some nice messages of family and conquering fears. The main character must learn that, even though the world can be tough, he must be able to not get discouraged and to persevere. Also, there is a very nice message of loving others even if they cause problems. There is even a message of adoption that’s very nice. THE GOOD DINOSAUR is a well-made animated movie, but there are some light references to evolution.

(BB, CapCap, Ev, Pa, VV, A, M) Strong moral worldview with strong capitalist elements, loving and caring for others who may not be able to reciprocate, positive family message, and characters strive to do something big and work on a family farm, plus light references to evolution and Mother Nature; no foul language, but character seen urinating; light action includes character falls into the river, character gets knocked out, bird like characters peck at another character, character takes a bite out of wing; no sexual content; no nudity; no alcohol, but characters eat bad fruit and become in a drunken state; no smoking or drugs; and, some lying by bad characters.

THE GOOD DINOSAUR is an animated adventure from Pixar and Disney about Arlo, a timid dinosaur who goes on a big adventure to find his family. THE GOOD DINOSAUR has beautiful animation, many entertaining moments and a strong moral worldview, but it feels a little long in parts.

In the beginning, three eggs hatch: one small, one medium and one large. The largest egg turns out to be a small little dinosaur named Arlo by his Momma and Poppa. Arlo is timid and teased by his siblings, Buck and Lori. The family of dinosaurs live on a farm and each day care for the farm. Poppa makes a huge silo so the critters will stay out of their food. After Poppa makes this, he puts his mark on the silo to show he did something big. As the years pass, each member of the family is able to put their mark on the silo if they do something great, and everyone has done that but Arlo. Every time Arlo has a job, he is way too scared to finish.

One day, Poppa decides to give Arlo another job to help him get over his fears. There has been a critter getting into the silo, so Poppa and Arlo create a trap. When the critter gets in the trap, Arlo is told to “get rid of him.” However, when the time comes, Arlo can’t bring himself to killing the critter, and helps let him go. Poppa sees this and runs after the critter, telling Arlo to follow him. A large storm comes, Poppa and Arlo are still running up the mountain to catch the critter. Getting swept up in the storm, Poppa dies. The entire family is devastated, and they don’t know how they will make it without Poppa.

Once again the critter is back, and this time Arlo does not want him to get away and chases him up the mountain. However, Arlo ends up getting completely lost and has to figure out his way back home. Arlo must get back before the first snow fall, to help his mother and siblings get everything ready for winter.

THE GOOD DINOSAUR has some nice messages of family and conquering fears. The main character must learn that, even though the world can be tough, he must be able to not get discouraged and persevere. Also, there’s a very nice message of loving others even if they cause problems. There is even a message of adoption in the movie that’s very nice.

One time, however, the characters eat some rotten fruit, which puts them into a drug-like state. There are also visuals to suggest evolution, statements that the earth is millions of years old, and some comments about “Mother Nature,” but they are very light statements. Some elements may be scary for younger children, including the movie’s suspense, certain scary dinosaurs, and the eating of other animals.

THE GOOD DINOSAUR is a well-made animated movie. The foreground animation is amazing, looks like live action, but the actual characters themselves look more cartoon. This is a very interesting dynamic of the cartoon like animation and natural looking animation, which some may like, but some may think a little odd. Along with this, some of the more natural animals talked and some didn’t. It does seem as if Pixar focuses a lot on the spectacular nature of the movie’s animation, rather then the storyline. The storyline was very much like FINDING NEMO, but not as well paced, nor as compelling. The jeopardy really was man versus nature, which got a little repetitive. Though this is the case, the movie had some nice poignant moments.

By the way, the short before THE GOOD DINOSAUR is called Sanjay’s Super Team:

A young boy watches TV as his father meditates to his Hindu gods. When the father turns off the TV, the boy is beaconed over to meditate also. Instead, he fantasizes about the Hindu gods becoming his favorite action heroes and fighting off bad gods. The short clearly has a New Age worldview, including meditation and Hinduism. The animation is about three different styles, and the plot line is just a fight between characters.

Rent or Buy THE GOOD DINOSAUR: