"Fighting for Liberty, Peace and Love" 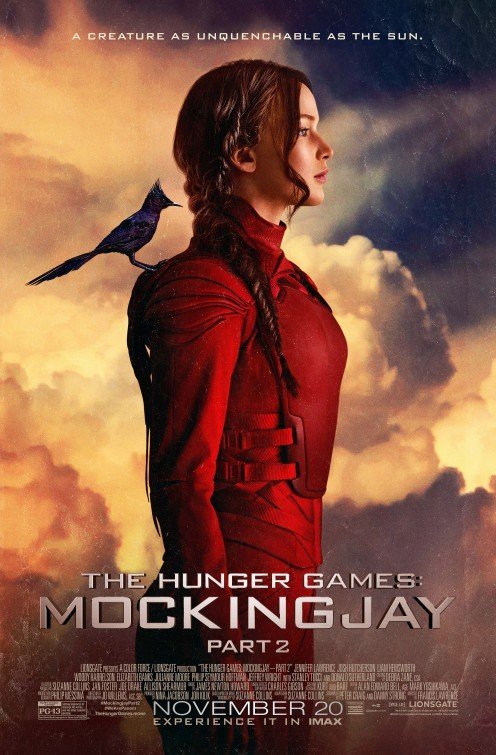 THE HUNGER GAMES: MOCKINGJAY – PART 2 opens in the underground bunkers of District 13. Peeta is still under the spell of President Snow’s brainwashing. He blames Katniss for the war against Snow’s dictatorship, including his family’s death. Eventually, Katniss leads a platoon to enter Panem’s capitol secretly so she can assassinate Snow, while the rebel forces conduct their final assault on the city. The rebellion’s leader has sent Peeta to join Katniss and the platoon. Peeta is starting to recover, but he still may snap at any moment and try to kill Katniss again.

THE HUNGER GAMES: MOCKINGJAY – PART 2 has moments of intense excitement, dynamic character development and dazzling visuals. However, the story never truly takes off. It seems to develop in fits and starts, and one major action scene is edited so fast and shot so unclearly, it’s a blur. That said, the movie has a strong moral, anti-totalitarian worldview promoting faithful and enduring love, liberty and free elections. Some intense, even scary, scenes of violence warrant caution, but MOCKINGJAY – PART 2 happily has NO foul language or lewd content.

(BBB, ACACAC, PP, PC, C, VV, M) Very strong moral, anti-statist and anti-totalitarian worldview extolling several moral virtues including enduring love, truth, sticking by someone when they’ve been forced or lured into doing wrong things, exposing the dangers of propaganda even when the propaganda might be used to conquer a great evil, working to earn your own food and survival, trying to help civilians and mitigate civilian casualties in a war zone (a Christian principle), doing the right thing during war and other situations, opposition to thinking that “the means justifies the end” (even when fighting evil), and focusing on good things rather than bad things (including bad memories), with strong positive elements supporting at least two American values (liberty and representative democracy), mitigated by a minor liberal, leftist, politically correct subplot in a couple scenes about a society’s wealthiest people (the infamous “one percent”) living in a big urban capitol controlled by an evil dictator who rules the whole society, plus some light redemptive elements of sacrifice, repentance, enduring love; no foul language; some intense and even scary violence includes gun battles, explosions, characters run from a trap involving a huge flood of oil, heroes battle slimy humanoid lizard creatures with no eyes and scary sharp teeth, human bodies fly into objects, one or more people killed by arrows, woman has bruises around her neck and on her tummy; no sex scenes, but two kisses (one in a secular wedding scene) and a second couple is not seen having a wedding, though it is suggested and later they are shown with two children; no nudity; no alcohol use; no smoking; and, light miscellaneous immorality includes heroine lies at one point but confesses later, villain has brainwashed the heroine’s love interest, God isn’t mentioned, and a minor character has been forced to have plastic surgery and tattoos to make her look like a tiger.

The rebellion against President Snow’s dictatorship of Panem comes to an end in THE HUNGER GAMES: MOCKINGJAY – PART 2, as Katniss, the symbol of the rebellion, decides to join the rebellion’s final assault on the capitol, with the secret intent of assassinating Snow. A staggered story structure and some confusing editing diminish the movie’s impact, but MOCKINGJAY – PART 2 has a strong moral worldview with a strong heroine and also promotes American values like liberty and representative government. Some intense, scary violence is the major caution for this movie, which happily (and wisely) contains no foul language or lewd content.

MOCKINGJAY – PART 2 begins in the underground bunkers of District 13, where Katniss is recovering from her brainwashed friend, Peeeta’s, attack on her in PART 1. Peeta is still affected by the brainwashing he suffered at the hands of Panem’s evil dictator, President Snow. He’s been forcibly led to believe that Katniss is the cause of all the pain, including the war between Snow and the rebels and the death of his family.

After a bombing raid and small battle with District 2, which has sided with President Snow and the nation’s capitol, it’s time for the final assault on the capitol. All the rebel districts have now been combined under the leadership of District 13’s President Coin. However, Coin doesn’t want Katniss to take part in the final assault. She wants to keep her behind the scenes as a mere propaganda tool, probably because, the movie suggests, Coin now sees her as a political threat.

Katniss chafes at this turn of events. She decides the best way to stop more deaths and casualties in this war is to secretly join the assault and make her way to President Snow’s mansion to assassinate him. She’s discovered, however, and President Coin and her advisor, Plutarch, place her with a small platoon designed to shoot live propaganda images away from the major assault. The platoon’s mission is more dangerous than it might first appear, because President Snow has laced the capitol with all sorts of deadly booby traps. The rebels have obtained a map of these traps, but new traps may have been built since they obtained this map.

Making maters worse for the platoon, President Coin has sent Peeta to join Katniss and her friends, which also include Gale, Finnick, Johanna, Cressida, Pollux, and Castor. Coin figures that, if they can show that Peeta has rejoined the rebels, it will be another propaganda victory. Peeta is starting to come out of the brainwashing, remembering some of his past with Katniss, but he still might snap at any time and try to kill her and the others.

The stage is set for a dramatic conclusion as Katniss and her friends slowly make their way toward President Snow.

THE HUNGER GAMES: MOCKINGJAY – PART 2 has moments of intense excitement, dynamic character development and dazzling visuals. Even though the middle is filled with many action sequences that don’t build the characters or plot, the overall arc of love triumphing over evil is strong. A long action scene where Katniss and her friends encounter angry humanoid creatures with no eyes and sharp teeth in the capitol’s underground sewers is edited so fast and shot so unclearly that the action is almost just one big blur, where viewers can easily lose sight of what’s happening to whom. Overall, the movie is entertaining and many of the scenes are extremely exciting.

Additionally, there are some surprising twists and turns that fit in really well with the HUNGER GAMES trilogy’s warning against totalitarian, big government tyranny and dictatorship. That said, the final movie in the trilogy doesn’t quite go far enough. Although the heroine and her closest friends support the free election of a new president, there’s no mention of having free elections for a legislature or the establishment of a just judicial system. Without a legislature and a judicial system to put some controls on a president and his or her administration, you can’t have true liberty.

However, MOCKINGJAY – PART 2’s strong moral worldview also promotes enduring, faithful love, favors a humane war that tries to minimize civilian casualties where possible, and exposes the dangers of propaganda and the dangers of believing that the ends justifies the means. Even so, God isn’t mentioned in the movie. There’s not even so much as a “Godspeed” in the dialogue.

So, MOCKINGJAY – PART 2 is a movie made for a Post-Christian society. It only has light redemptive content referring rather obliquely to such things as sacrifice or repentance. At one point, Katniss the heroine even tells a lie to the platoon, though later, when Katniss admits her lie, the movie reveals that everyone in the platoon knew she was telling a lie at the time and went along with it anyway because they believe in Katniss wholeheartedly. Despite this, MOVIEGUIDE®’s sympathy for Katniss took a hit with the telling of this lie.

On a much more positive note, at the end of the movie, there is a possible allusion to Philippians 4:8, where Paul tells Christians to concentrate on the good, true, just, and beautiful things in life. Thus, Katniss says at the end that, despite the nightmares she has seen and experienced, she chooses to focus on good things, including good memories, and that is what truly gives her strength and peace to live a good and even better life.

MOCKINGJAY – PART 2 has some intense and even scary scenes of violence, so it warrants a caution for older children and teenagers. Moviegoers might also want to be concerned about the movie’s assassination plot. However, it’s totally free of any foul language or lewd content. MOVIEGUIDE® couldn’t be happier about that fact, especially since the final HUNGER GAMES movie is clearly intended to attract as many older pre-adolescents and teenagers as possible.