"Walking in the Footsteps of History" 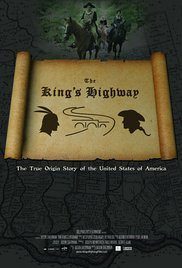 THE KING’S HIGHWAY is a TV documentary now on home video that follows the history and preservation of important sites along a historical road in Northeastern Philadelphia. King Charles of England designated the road an official highway way back in 1650. The highway held great significance in colonial America and continues to be used today. Historian and filmmaker Jason Sherman gives audiences a tour of some of the stories and settings along the highway that shaped America’s history. Among the most important was the march of colonial revolutionary soldiers to their victory in Yorktown. Interspersed with this material are quotes from local historians, experts and impersonators.

THE KING’S HIGHWAY contains many captivating historical stories, which may help audiences overlook some cheaply made graphics. In the end, however, a very emotional call-to-action about historical preservation drags on too long. This flaw in the program might bore and alienate some viewers. THE KING’S HIGHWAY has a very strong moral worldview, and a high view of Christianity. Even so, some viewers may want to exercise caution due to brief historical violence and mentions of alcohol.

(BB, PPP, CC, V, N, A, M) Strong moral worldview promotes knowledge and preservation of America’s history, especially that of the founders and revolutionaries, plus some strong, overt Christian references include a scene at the beginning implies that the local church is involved in the process, a local priest is interviewed as an expert throughout, an entire segment is devoted to the church as a center for colonial community life, William Penn’s Quaker beliefs are described in a positive manner; no foul language; there are paintings and re-enactments of revolutionary war battles, some bodies are shown, but no gore, brief black and white footage of Anti-Catholic riots, dramatic destruction of historical buildings that some may find upsetting; no sexual content; upper male nudity in home video footage at the beginning, and upper and lower male and female nudity in historic paintings of native people; segment on the importance of taverns to community life, Benjamin Franklin impersonator calls beer “God’s way of showing He loved us,” and brief sequences of people serving and drinking alcohol, but no visible intoxication; no smoking or drugs; and nothing else objectionable.

THE KING’S HIGHWAY follows the history and preservation of important sites along a road in Northeastern Philadelphia that held great significance in early American life and continues to be used today.

Originally a road used by the Lenape, and other local indigenous tribes, King Charles designated the road an official highway in 1650. William Penn, the founder of Pennsylvania, put a great deal of work into making it a road that could connect the entire colony. Later, the King’s Highway would become a highly important route for the revolutionaries, as it was the path taken by colonial troops to their final victory in Yorktown.

Historian and filmmaker Jason Sherman gives audiences a tour of some of the stories and settings along the King’s highway that shaped America’s history, from the time before European settlers to the second industrial revolution. The program interjects quotes from local historians, experts. and impersonators. Finally, Sherman and other historians implore viewers, especially those who live in the Philadelphia area, to get involved in protecting historic buildings that aren’t on a state registry.

The documentary is acceptable for most people, except for young children who might be frightened by mild historical violence. There is a brief discussion revolving around alcohol, which does not endorse drunkenness, but also doesn’t condemn it. It simply accepts drinking alcohol as part of the ordinary lives of the historic figures in question.

Overall, THE KING’S HIGHWAY has a very positive attitude towards Christianity. The church is described as central to colonial lives; and William Penn’s Quaker beliefs are presented as central to his good relations with indigenous tribes. The program’s premise is a very moral one. The creators desire to protect and remember the legacy of their ancestors, and pass it on to the next generation. This is something that the Bible seems to commend.

The program’s quality is decent. The graphics are cheap, such as a few cutaways with no more technological innovation than the zoom feature on Google Maps. The cinematography is professional, and the sound quality is mostly good, except for when the speakers are standing under the elevated train in the city. Some of the B-roll footage of actors in historical costume is a bit contrived and campy.

The first half of the documentary is captivating. Many of the historical stories to be found along the road in question are relatively unknown. There is a lot of interesting information to be gleaned from the historians and experts featured here. However, the second half of the movie is comprised of historians imploring audiences to protect historic buildings. It drags on for a very long time, and becomes a bit emotionally manipulative, and very repetitive. If this call-to-action had been shortened, the movie would have done a much better job of keeping its audience engaged, or at the very least, prevented them from becoming bored.

In the end, there’s a lot of interesting and important history explained in THE KING’S HIGHWAY, but the call-to-action in the second half drags on so long that it possibly might alienate audiences. This documentary is accessible to all ages, though some slight caution may be in order due to brief historical violence and mentions of alcohol.

Rent or Buy THE KING'S HIGHWAY: