"True Love Will Find a Way" 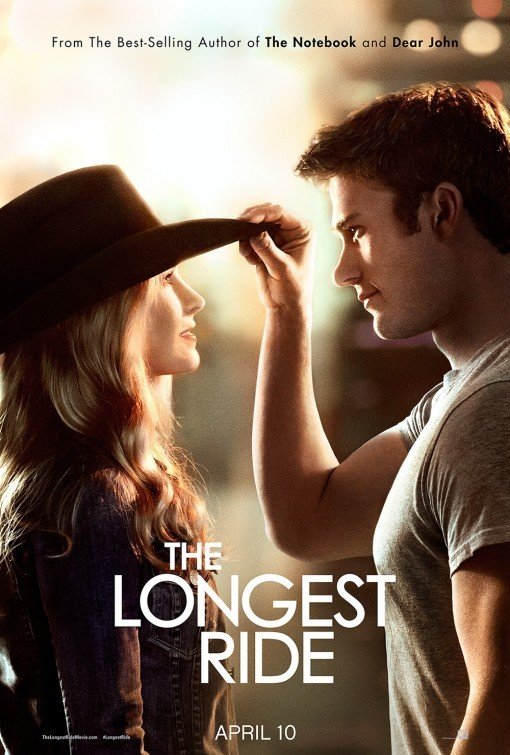 THE LONGEST RIDE tells the story of a rodeo bull-rider named Luke and an art student finishing college named Sophia. On their first date, Luke and Sophia save the life of an elderly, dying man, Ira. Because of Ira’s failing eyesight, Sophia begins reading Ira’s letters to his late wife, Ruth. What happened to Ira and Ruth’s marriage? What will happen to Luke and Sophia’s romance? Will Luke, who suffered an earlier rodeo injury nearly ending his life, survive his brushes with death in the rodeo?

For the most part, THE LONGEST RIDE is well constructed, emotionally powerful and well acted, especially by Jack Huston and Oona Chaplin as the young Ira and Ruth. Also, the rodeo scenes are exciting, and the movie has a nice, uplifting ending. The movie sags in the middle, especially when Luke and Sophia take off their clothes. Overall, it has a light moral worldview extolling marriage, commitment and kindness, but it also contains nods to breaking the rules in love and art. THE LONGEST RIDE also has some foul language. So, MOVIEGUIDE® advises extreme caution.

(B, RoRo, FR, LL, V, SS, NN, AA, M) Light moral worldview supporting marriage, commitment and kindness, including a scene set in a Jewish synagogue where people are clearly praying, undercut by some Romantic, lawless notions of love, art and “breaking the rules” but with a positive, ultimately uplifting ending; seven obscenities (“d” and “s” words and an SOB), two strong profanities (a GD and a Use of Jesus) and five or six light exclamatory profanities; some intense rodeo scenes with bull riding, including one where man knocked unconscious in the ring, and bull knocks into him, and one where bull flings man against the boards, plus man rescued from fiery car that has crashed off the side of the road; partially depicted fornication, implied fornication, passionate kissing, couple nude in shower kiss passionately, and a scene that may or may not suggest fornication; partially but seemingly obscured upper female nudity, implied nudity, upper male nudity, partial rear male nudity when man’s putting on his clothes, couple in their underwear jump into a pond; alcohol use and side female character is drunk and sick in one scene; no smoking or drugs; and, man makes a rude joke deriding modern art in gallery, man risks his life by continuing his rodeo career, man indicates an infection from a war injury has rendered him sterile, wife eventually leaves husband for a bit after arguing with him because he can’t have children (but she soon returns, and they embrace).

THE LONGEST RIDE may be the best adaptation of a Nicholas Sparks bestselling romance. It will certainly give THE NOTEBOOK a run for its money in popularity. The story has some strong emotionally powerful moments that lift the movie past the run-of-the-mill “chick flick,” including an uplifting ending with a great twist. However, the story sags a little in the middle, mostly because of some steamy, immoral bedroom scenes that add absolutely nothing to the story.

The movie opens at a rodeo, with the male hero, Luke, severely injuring himself while riding Rango, the toughest bull on the rodeo circuit. Cut to one year later at Wake Forest University in North Carolina, where Marcia encourages her sorority sister, Sophia, to come with her to the rodeo. Since she’s studying, Sophia is reluctant, but Marcia points out that Sofia is about to graduate with excellent grades, so she can afford to take one night off. Besides, Marcia says, the rodeo cowboys are really “hot.”

At the rodeo, a very nervous Luke is about to take his first bull ride since his rode with Rango sent him to the hospital. He manages to get through the ride successfully and ends up hatless in the rodeo ring right next to Sophia and Marcia sitting in the front rows. Sophia tries to give Luke his hat, but he says, “Keep it!”

At the rodeo dance bar, Sophia and Luke run into each other in the parking lot. Luke gets her phone number, but then they have to part because Marcia has gotten sick from drinking too much, and Sophia decides she should take Marcia home.

When she graduates, Sophia is leaving for New York City for an unpaid, summer art internship with a well-known gallery owner. So, she’s reluctant to go out with a North Carolina guy like Luke, but she agrees to a special dinner date. On the date, Sophia and Luke clearly have some chemistry going. Driving back in the rain, however, Luke spies a car run off the road. Luke and Sophia rush to the burning car, where they save an elderly man named Ira and a box of letters Ira wrote to his late wife, Ruth.

Sophia stays at the hospital to wait to see if Ira’s okay. While she’s waiting, she starts reading one of the first letters Ira wrote to Ruth, dated 1940, the year when Ruth and her parents had arrived in North Carolina from Vienna, then controlled by Hitler’s Germany. Flash back to Ira and Ruth’s first meeting. Of course, Ira is immediately smitten with Ruth and can’t take his eyes off her during the Saturday visit to their local synagogue. However, Ira is too shy, and Ruth has to make the first move.

Back in the present day, Ira survives his brush with death, but he’s pushing 90 and is preparing himself to die. Sophia mentions she read his beautiful letter to Ruth. Ira says his eyes are no longer good enough to read them anymore, so Sophia offers to start reading them to him.

Sophia begins making regular visits to Ira to read aloud his letters to Ruth. Meanwhile, her romance with Luke starts taking off. However, both her romance with Luke and Ira’s relationship with Ruth hit some snags. So, the question is, what happened to Ira and Ruth’s romance? And, what will happen to Sophia and Luke’s?

Despite having two stories at the same time, THE LONGEST RIDE mostly does an excellent job weaving them together.

Admittedly, the romance between Ira and Ruth is the more emotionally and cinematically captivating one, with arguably better performances by Jack Huston and Oona Chaplin as the young Ira and Ruth. However, Scott Eastwood and Britt Robertson give appealing performances as Luke and Sophia. Also, the rodeo scenes with Luke or Luke and Sophia together are pretty good. The filmmakers have added some fine (albeit predictable) jeopardy with the rodeo scenes, where Luke truly seems in danger of killing himself, especially when riding the fearsome Rango. There’s also an excellent scene on a World War II battleground, where Ira suffers a war injury that will have tragic consequences for Ruth and him, including their marriage.

Finally, Alan Alda as the elderly Ira provides the necessary glue that links Ira’s story with Luke and Sophia’s. Sometimes, Alda can be annoying, but he gives a touching performance in THE LONGEST RIDE. In fact, it’s one of his best performances. It leads to a very nice plot twist at the end, which wraps up the whole movie in a great way that should leave most or many viewers with a positive mood as they leave the theater.

Besides some brief foul language, the real problem with THE LONGEST RIDE doesn’t lie with the story, its structure, the acting, the editing, the lighting, the camerawork, or even the movie’s genre, which is schmaltzy romance. The real problem occurs in the middle, when the movie presents some passionate, mostly implied nude scenes between Luke and Sophia. These sensual, partially depicted sex scenes occur in the middle and don’t add anything to the story or the acting. In fact, if they were deleted or greatly shortened, they would make the movie a better one artistically, not just morally.

These sex scenes also have something to do with this movie’s philosophical, worldview problems.

THE LONGEST RIDE has a moral worldview in that it promotes true love leading to some kind of marital commitment. However, its moral worldview is greatly diminished by elements of Romanticism. For example, at one point in the movie, Ruth expresses her love for modern, mostly abstract, art, a love that neither Ira (nor Luke in his scenes with Sophia) share. In fact, in one scene, Luke jokes to Sophia’s future boss for her summer internship that the art in her gallery is mostly “BS.” Ruth, however, tells Ira that she loves modern abstract art, particularly Kandinsky, one of the first abstract painters, because Kandinsky (like other abstract artists) broke all the rules.* Of course, extramarital sex also breaks the rules, the rules that God has set down in His Word, the Bible.

Here, it may be interesting to note that the Romanticist may love to “break the rules,” especially the rules God has established. However, they often seem to get extremely upset whenever someone opposes them or questions their “rebellion,” especially when there’s an artistic, moral or political component to their rebellion.

Ultimately, therefore, THE LONGEST RIDE’s Romantic notions of love and art, and its lewd content, warrant extreme caution. The movie isn’t totally worthless, however. For the most part, it’s very well done and has its powerful and even morally uplifting moments. Happily, marriage is extolled at some points, and both couples find happiness being committed to one another, but the movie certainly could have been even stronger in this arena. Also, there is one scene set in synagogue, but otherwise, THE LONGEST RIDE has no positive references to religion or the Bible. So, here too, the movie could have been stronger. All people, whether Jew or Gentile, should focus on God and His Word, through Jesus Christ, not only in their marriage and family life, but also in all other areas of their multi-faceted lives.

* Editor’s Note: According to our research, Kandinsky was influenced by the occult, heretical teachings of theosophy and invented a theory of spirituality in artistic expression that seems more emotional, vague and confused than intellectually profound (leaving aside its possible adherence to or rebellion against biblical theology). Kandinsky also felt that some kind of a “New Age” was coming. The socialist atheist regime in the Soviet Union in the 1920s, the socialist movement in Europe in the 1930s and the Nazi movement all rejected Kandinsky’s art, though latter-day socialists and even Nazis may now look at it more positively. Depending on the person, some of his paintings do indeed seem quite colorful, appealing and artistically brilliant, while others seem kind of silly, confused or stupid.