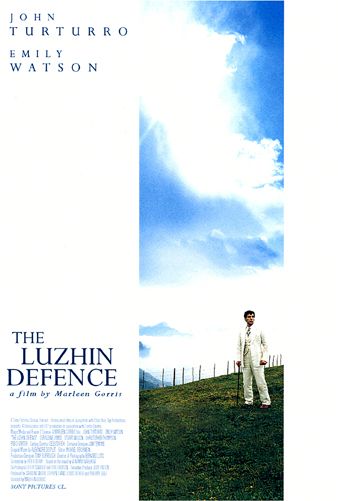 THE LUZHIN DEFENCE is a beautifully crafted period piece set in 1929 Italy. It tells the tragic story of a chess grandmaster, Alexander Luzhin, played magnificently by John Turturro. Alexander finds himself in a championship match, much to the chagrin of his former mentor, a villainous man named Valentinov, who abandoned Alexander during a momentary bad spell. Obsessed with chess, Alexander falls in love with an aristocratic woman, Natalia, played by Emily Watson. Their future is endangered by Natalia’s family and Valentinov’s efforts to prey on Alexander for his own gain.

THE LUZHIN DEFENCE is an extremely exciting story, considering it is character based. By the final match, the audience cares deeply about who wins, and the match couldn’t have been more exciting if it had been a big Hollywood sports picture. It is hard to imagine John Turturro as a leading man, but he fits perfectly in this role. Emily Watson’s quirkiness makes it very believable that she would fall for this misfit. The movie’s moral worldview focuses on the exploiting of genius and the wages of sin. It is undermined, however, by Alexander and Natalia’s premarital affair and a suicide motif

THE LUZHIN DEFENCE is a beautifully crafted period piece set in 1929 Lake Cuomo, Italy. It tells the tragic story of a chess grandmaster, Alexander Luzhin, played magnificently by John Turturro, whose asymmetrical features and tremendous acting ability bring life into this misfit genius.

Luzhin arrives at the train station oblivious to the fanfare awaiting him. He is dressed in old, tattered clothes. The other guests at the magnificent resort are perplexed by the attention being shown this shambling, unworldly character. Yet, there is something magnetic about him. Those who know of his great chess prowess are in awe of him. His life is totally wrapped up in chess. He madly scribbles down moves. He dreams chess matches, and, when he is not thinking about chess, his memories go back to his unhappy boyhood.

Alexander grew up in a beautiful home in Russia in St. Petersburg, probably much like the home of Vladimir Nabokov, who wrote the novel upon which the movie is based. His parents’ marriage was falling apart. His mother’s sister had co-opted the love of his father. This beguiling, effervescent Aunt Anna gives Alexander a beautiful crystal chess game. He is so enraptured by it that he skips three weeks of school to just play chess and is kicked out. Soon, however, the head of the school, Valentinov, finds out that Alexander has this genius for chess. This machiavellian puppetmaster, Valentinov, takes little Alexander under his wing and makes a fortune off his genius. When Alexander loses a game in his early manhood, however, Valentinov drops him off in the middle of a strange town with a suitcase and little money. Somehow, Alexander gets back into the game, and now he’s playing for the world championship.

Another Russian émigré group at the hotel consists of Vera and her daughter Natalia, played by Emily Watson. Vera wants to marry her daughter off to a wealthy count, but Natalia is intrigued by Alexander Luzhin. When she shows a brief interest in him, he suddenly wakes up to the world beyond chess and blurts out a proposal of marriage. The mother is horrified, but Natalia is smitten.

To complicate Luzhin’s life, Valentinov shows up seething with anger that Luzhin has made it back to the top of the world of chess. Vengeful, Valentinov tells Luzhin’s rival, an Italian count, that he will fix the match. To do so, he even goes to the length of having Luzhin kidnapped and dumped in the countryside, where four soldiers find him. The kidnapping throws Luzhin into a complete nervous collapse. The doctor tells Natalia that he must give up chess. Regrettably, this is what his father told him as a boy. Since he is addicted to chess, the medical prescription brings tragedy.

THE LUZHIN DEFENCE is an extremely exciting story, considering it is character based. By the time of the final match, the audience cares deeply about who wins, and the match couldn’t have been more exciting if it had been one of the big Hollywood sports pictures. In a way, the movie is the obverse of SEARCHING FOR BOBBY FISHER. In that movie, the parents took an interest in their child and learned to care for his chess genius. In this movie, it is the parent’s selfishness that eventually results in tragedy.

THE LUZHIN DEFENCE is deeply moral for the sense in which the wages of sin are visited upon the children. Natalia tries to love Luzhin, but in fact she doesn’t know how to care for this misfit genius. Valentinov is an incredible Svengali character, who exploited the young Luzhin for money and then had to destroy Luzhin when he went out on his own.

The movie is very subtle. There is no profanity, and the violence of a man falling to his death and Luzhin’s mother dying is done with great discretion.

Regrettably, there are several scenes of fornication, though they are filmed so that nothing is shown. These scenes are between the engaged Natalia and Luzhin, and they merit a caution because they degrade the moral base of the storyline and send the wrong message. On the other hand, Natalia does go to the church to get married, and the mother does eventually support her daughter’s decision to marry Luzhin.

It is hard to imagine John Turturro as a leading man, but he fits perfectly in this role. Emily Watson’s quirkiness makes it very believable that she would fall for this misfit.

Vladimir Nabokov was infatuated with addiction. The doctor here tells us that Luzhin is addicted. However, the question is, is this an addiction, or is his life merely circumscribed by his own genius? The movie seems to focus more on the exploiting of genius and the wages of sin than it does on the consequences of addiction. Perhaps, the message of the movie escaped even the filmmakers, which is that these people needed Jesus Christ.