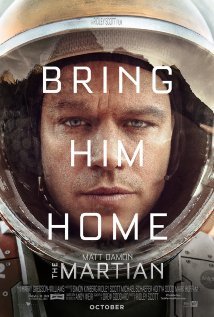 Directed by Ridley Scott, THE MARTIAN stars Matt Damon as Astronaut Mark Watney, botanist for one of several planned American missions to Mars. A massive sandstorm swamps the Martian base. As the storm begins to strike, the female captain decides it’s time to leave. Mark is hit by a large satellite communications dish and presumed dead, so the crew departs without him. However, Mark turns out to be very much alive. Using his ingenuity, with some winsome help from Jesus, Mark begins to think of ways to survive until the next Mars mission several years away. THE MARTIAN is exciting, suspenseful and surprisingly funny. The production is first class, with excellent special effects. The problem is the editing. At times, especially in the middle, the movie seems like a travelogue and moves slowly. However, Matt Damon gives perhaps his most appealing performance, and the ending is spectacular. THE MARTIAN has some unexpected positive references to Jesus in one scene, and moral, redemptive elements of sacrifice and saving lives. However, a significant amount of foul language and brief humanist elements warrant strong caution.

CONTENT:  (CC, BBB, H, Pa, LLL, VV, N, M) Strong Christian worldview with overt references to Jesus, including a plea to Him for forgiveness, elements of sacrifice, death and resurrection, some implied references to God, and very strong moral elements, mitigated by a humanist exhortation at the end and one man mentions his father was a Hindu but his mother was a Baptist; about 21 or 22 obscenities (including two spoken “f” words), two strong profanities and eight light profanities (a few of which could be interpreted as appeals to God in a moment of stress), plus character appears to mouth a couple “f” words’ words when he hears some bad news, there’s a bleeped “f” word on a computer screen, and man must used dried human excrement and moisten it as fertilizer for some potato plants; intense violence includes astronaut hit by vicious sandstorm with high winds, astronaut hit by small flying satellite dish at high speed during sandstorm, astronaut deals with bloody wound on tummy after being impaled by a satellite antenna, explosions, intense rescue in outer space; no sex but female astronaut kisses helmet of other astronaut going on a dangerous errand that may kill him; upper and rear male nudity as astronaut changes clothes, deals with bloody wound and comes out of shower; no alcohol use; no smoking or drugs; and, people sometimes get frustrated, angry and slightly insolent when problems occur, plus American space programs seeks and gets help from Chinese space program to rescue an American astronaut stranded on Mars, so there’s a light “kumbaya” element toward the end that could be seen as politically correct by some.

THE MARTIAN stars Matt Damon as an American astronaut accidentally left stranded on Mars, in a tense and surprisingly humorous story about survival in outer space. THE MARTIAN is Director Ridley Scott’s best movie in years, with an exciting finish, but the middle is too slow at times, and there’s some intense adventure and a significant amount of foul language, including a couple verbalized “f” words. Matt Damon stars as Astronaut Mark Watney, the botanist for one of several planned American missions to Mars. A massive sandstorm is coming toward the Martian base established by Mark and his five companions, and it turns out to be stronger than anticipated. So, the female captain decides it’s time to leave the planet. However, as the storm begins to strike the camp, Mark is hit by a large satellite communications dish and presumed dead, so the crew departs without him. However, Mark turns out to be very much alive.

Using his ingenuity, and with some winsome help from Jesus, he begins to think of ways to survive until the next Mars mission three or four years into the future. Eventually, though communications have been lost, NASA figures out Mark is still alive, because he’s been moving the land rover to test how far he can extend the life of its batteries. Keeping Mark alive and bringing him home turns out to be easier said than done, as several obstacles get in the way. THE MARTIAN is exciting, suspenseful and surprisingly funny at times. The production is first class, with excellent special effects. The problem is with the editing. At times, especially in the middle, the movie seems like a travelogue and moves slowly. For example, one MOVIEGUIDE® viewer said he got tired of seeing Matt Damon eat the potatoes his astronaut character grows to survive.

That said, THE MARTIAN opens with a bang and closes with an exciting finish. Surprisingly, the scenes of the NASA and JPL scientists trying to figure out ways to help their stranded astronaut are almost as exciting and riveting as watching the astronaut and his companions survive a dangerous mission. In both cases, the astronauts’ lives are at stake. One of the movie’s biggest assets is the strength of Matt Damon’s performance as the stranded astronaut. Despite the potato scenes, Damon gives perhaps his most appealing performance here. Viewers will believe that his character is both smart and funny. You can’t help but root for his survival. Content-wise, perhaps the biggest problem is a significant amount of foul language.

The foul language isn’t constant, but THE MARTIAN would have been a family-friendly movie without so much of it. A little bit of foul language goes a very long way! One of the movie’s most appealing, winsome scenes is a scene where the stranded astronaut shaves some pieces off a wooden crucifix that a Christian astronaut has left behind. The astronaut needs some wood to start a chemical fire that will produce water for the potatoes he plans to grow. The astronaut apologizes to Jesus and prays informally that, hopefully, Jesus will bless his plans. The movie also contains a couple other, but more vague and implied, appeals to God.

Of course, the whole movie is based on the premise that all human life is important, even if it’s only the life of one stranded astronaut. People nobly sacrifice their careers and their own lives to rescue Mark Watney. These positive Christian, moral elements are mitigated by some humanist and other Non-Christian elements and references. Although the stranded astronaut and another character appeal to God in two or three scenes, another character notes his father was a Hindu and his mother was a Baptist. Also, the movie contains some humanist dialogue from the stranded astronaut where he places his faith in himself and his own abilities, not in God. There is nothing necessarily wrong in doing this, as long as we also acknowledge that our existence and our abilities are dependent on the God who created us and sustains us.

Acknowledging God in our prayers is also relevant here, of course. Be that as it may, the foul language in THE MARTIAN moves it away from being a family-friendly movie. So, MOVIEGUIDE® advises strong or extreme caution.