"Brother’s Prayer Journey Leads to a Greater Understanding of God" 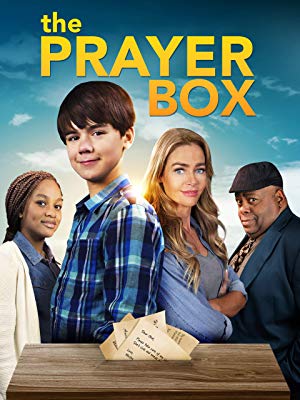 THE PRAYER BOX begins on Sunday. Thirteen-year-old Wesley’s mom, a divorced mother, travels to the hospital to be by the side of her daughter, Mallory, who has cancer. While at church, Wesley sees the troubled pastor throw the prayer requests in the prayer box away. Wesley decides to take the discarded prayer requests and answer them himself, in hopes that God will notice his plea to heal his sister.

A Kairos Prize winner, THE PRAYER BOX is a heartfelt, clever, creative family movie showing that God works in His own ways and time. Bible verses introduce a general theme for the character actions, situations and emotions in the sequences, and to aid the viewer’s understanding of events. Eventually, Wesley and the other characters learn that God orchestrates all things according to His loving plan. This lesson strengthens and matures their faith in inspiring ways. However, the ending feels a bit rushed, wrapping things up in the last ten minutes. THE PRAYER BOX is appropriate for all ages, but MOVIEGUIDE® advises a slight caution for a tussle between Wesley and another teenage boy.

(CCC, BBB, V, A, M):
Dominant Worldview and Other Worldview Content/Elements:
Very strong Christian, biblical, moral worldview, characters worship in church, people quote Scripture verses and the story is separated into four parts by four different Bible verses, and moments where characters, including a pastor, wrestle with God’s faithfulness, indignant attitudes towards honesty and the power of prayer, but they ultimately learn that God orchestrates all things according to His plan and His goodness, which strengthens and matures people’s faith;
Foul Language:
No foul language, cancer patient has an extreme cough attack;
Violence:
Scene where two 13-year-old boys get into a light tussle resulting in a bruised eye, but fighting obscured from sight;
Sex:
No sex;
Nudity:
No nudity;
Alcohol Use:
A few beer bottles depicted in a bar, but no depicted alcohol use;
Smoking and/or Drug Use and Abuse:
No smoking or drugs; and, •
Miscellaneous Immorality:
Light miscellaneous immorality includes lying and young teenage character sometimes questions the authority and behavior of adults.

A Kairos Prize winner, THE PRAYER BOX is a sweet drama about 13-year-old Wesley’s who’ prayers don’t go the way he wants, so he takes matters into his own hands and acts as a good Samaritan for his church by answering their prayers so that God will notice his efforts and heal his sister heal from cancer.

Separated into four parts by four biblical verses, the story begins on a Sunday morning where Wesley’s mom Karen (Denise Richards), a single mother, goes to the hospital to be by the side of her daughter Mallory, who has cancer. She urges Wesley to go to church, even though she doesn’t feel like going herself. Wesley walks down to the altar to pray earnestly for Mallory and puts his prayer in the “prayer box” at the close of the service. After eating a potluck lunch at the church, he goes back into the sanctuary to get his jacket that he forgot and sees the pastor tossing the prayer requests into the trash. Wesley waits for him to leave, then takes them out of the trash. Once home, he decides to take action to make the prayers come true.

To gather money to make these prayers become a reality, Wesley tells Pastor Conlin he knows he put the prayers in the trash in hopes it will scare him into letting him work at the church doing maintenance. Showing an indignant attitude, Pastor Conlin gives an excuse as to why he threw them away. After brief negotiations, Wesley gets what he wants and starts lending a hand around the church as he continues to take the prayer requests to pay them forward.

One day, Wesley and a church member, Mr. Wells, start working on the outside refurbishments of the church until Mr. Wells falls from the ladder and winds up in the hospital. While there, he encourages Wesley that his prayer at the end of service days ago, “cleaned [them] up on the inside just because he believed,” and reminds him not to let anyone look down on him just because he’s young.

Wesley continues to shower his church community with answered prayers, without their knowledge. In a visit to the hospital, he encourages Mallory, saying, something to the effect of “God will start to notice us,” as he tries to get her to believe that she will be fine. Meanwhile, Wesley can’t pay for his school lunch so his classmate, Olivia, Mr. Wells’ granddaughter, gives him the money, and the two become pals.

Will God grant Wesley’s prayer to heal his sister? Will he, his mother, and Pastor Conlin make peace with God and find healing and forgiveness?

THE PRAYER BOX is a clever and creative story that ends with repentance and an increased awareness of God’s faithfulness, especially when we don’t understand our circumstances. Bible verses appear every so often to introduce a general theme for the character actions, situations, and emotions in the proceeding sequences that help aid the viewer’s understanding of events. Eventually, Welsey and the other characters learn that God orchestrates all things according to His plan and His goodness. This lesson strengthens and matures their faith in an inspiring way. However, the ending feels a bit rushed, wrapping things up in the last ten minutes. THE PRAYER BOX is appropriate for all ages but MOVIEGUIDE® recommends a slight caution for a brief tussle between Wesley and another young teenage boy.

Please note that THE PRAYER BOX was a Kairos Prize winner.

Rent or Buy THE PRAYER BOX: