THE PRINCE OF EGYPT 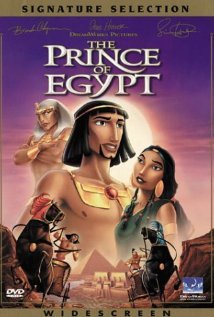 Magnificent entertainment, THE PRINCE OF EGYPT takes animated movies to a new level as it dramatizes the biblical story of Moses and his call from God to lead the Israelites out of Egypt. By the grace of God, Moses is rescued from Pharaoh’s command to kill the firstborn of Israel. Ironically, he is brought up in Pharaoh’s home as one of his sons. Eventually, Moses comes face to face with God in the burning bush. Finally, Moses uses the power of God to reveal the false powers of Egypt and to free God’s chosen people.

Magnificent, groundbreaking art, music, story, and direction combine to make THE PRINCE OF EGYPT an entertaining masterpiece. Although the movie contains some scary scenes, it contains nothing that little children can’t watch as long as parents are involved. THE PRINCE OF EGYPT proclaims the sovereignty of God and His miraculous involvement with mankind. It shows the need for virtue, integrity, character, and the Ten Commandments. The movie also clearly shows God acting in history. It foreshadows the Prince of Peace, who leads all those who ask out of their contemporary bondage into freedom in the kingdom of God. THE PRINCE OF EGYPT is entertainment at its best

(CCC, BBB, V, N, M) Very clear God-honoring, theocentric, false-religion rebuking, biblical worldview where God is the hero behind the scenes & false-religions are exposed & rebuked; no language problems; violence done very effectively but tastefully so that the audience knows that the first born are being killed & that the angle of death is passing by but don’t see the gruesome act of violence, water turns into blood, & many plagues & boils; pictures of children being thrown into the river clearly showing that they are little baby boys, but nothing excessive or salacious; some suggestive clothing, one shot up a man’s tunic revealing underwear; one shot of buxom woman behind veil who turns out to be servant who was bound & gagged; no sexual activity; no alcohol use; no smoking; and, clear portrayal of Egyptian religion & a little suggestive humor.

I laughed; I cried; and, I was inspired!

THE PRINCE OF EGYPT takes animated movies to a new level of entertainment. Magnificent art, music, story, and realization combine to make THE PRINCE OF EGYPT one of the most entertaining masterpieces of all time. This movie is so far beyond what has come before that it must be seen to be believed.

THE PRINCE OF EGYPT tells the biblical story of Moses in a dramatic way. The beginning credit informs us that certain aspects of the story have been slightly changed for dramatic purposes but the essence, the truth and the majesty of the story have been honored. The credit also tells us to read the full story in Exodus. Having arranged for many top theologians to give their advice on the movie, it is a joy to see that the movie is so entertaining and so theologically sound!

In the beginning, the Israelites are slaves in Egypt. From God’s perspective, as the Egyptians kill the first born infant sons of their Israelite slaves, Moses’ mother, sister and brother rush to the river Nile to set him afloat in a basket so that he will have a chance to survive the bloody holocaust. Miraculously, little baby Moses escapes all of the tribulations of the river and is rescued by the Queen of Egypt. Thus, he is brought up in Pharaoh’s home, as one of his sons, competing with his brother Ramses in a wonderful, lighthearted, thrilling, yet telling way.

Moses instigates mischief, and Ramses gets blamed for it. The Pharaoh explains that Ramses is going to have to accept the responsibility of the crown and the Egyptian kingdom that goes with it, a burden that Moses does not have to bear. Pharaoh explains that he is tougher on Ramses because there cannot be a weak link in the dynastic chain. Moses, in turn, asks only that Ramses be given a chance to lead.

At the ensuing banquet celebrating the Pharaoh’s passing of more authority to Ramses, the Egyptian priests present Ramses with a beautiful Midianite slave. When she proves too independent, Ramses turns her over to Moses, and, when she escapes, Moses goes searching for her, only to meet his real siblings Miriam and Aaron and to find out that he is, in truth, born of the Israelites.

Confused, Moses confronts Pharaoh. Realizing the truth, Moses tries to protect one Israelite slave, only to kill an Egyptian in the process. Distraught, he escapes into the desert where he eventually rescues three little Midianite girls from brigands. Thus, he stumbles into Tzipporah’s tribe, the Midianite slave who fled from Egypt.

Tzipporah’s father Jethro, high priest of the Midianites, teaches Moses that every person is valuable, and that he must look at himself from God’s point of view. Eventually, Moses and Tzipporah get married.

Years later, while searching for a lost sheep, Moses comes face to face with his destiny and with his God, in the burning bush. God sends Moses back to Egypt to free his people and gives Moses the ability to do wonders so that Ramses will know that God sent Moses.

Ramses is happy to see Moses back. Amused by Moses’ request to let the slaves go, Rameses treats Moses’ displays of God’s wonders as simple parlor tricks, which his high priests can replicate.

Eventually, however, Ramses understands that Moses is serious, as he recalls that he cannot be the weak link in the dynastic chain of Egypt’s Pharaohs. Thus, the power of God confronts the false powers of Egypt to free His chosen people. The rest of the story is more magnificent and powerful than can be described.

The artwork in THE PRINCE OF EGYPT is beyond what has ever been done in an animated film before. Jeffrey Katzenberg, who used to head production at Disney, wanted to do it better, and he has. The music is Broadway quality, uplifting, powerful, singable, memorable, enjoyable, and relevant. The direction has brought many fine acting voices to a new level of excellence.

There are some frightening scenes in the movie: the plagues, the angel of death visiting the first-born Egyptians, and the hieroglyph showing the death of the first born of the Israelites. The Egyptian priests are dark and sinister. Their gods are frightening. The confrontations with the true God are awesome in the traditional sense. Therefore, this is an animated epic aimed at an older audience. However, in light of all my years of studying cognitive development, I don’t think there is anything here that a younger audience can’t watch as long as there is parental involvement.

The good news is that, at a time when false religions are rampant, THE PRINCE OF EGYPT proclaims the sovereignty of God and His miraculous intimate involvement with mankind. THE PRINCE OF EGYPT shows the need for virtue, integrity, character, and the Ten Commandments. The movie clearly shows God acting in history. Best of all, it foreshadows the work of the Prince of Peace, who leads all those who asks out of their contemporary bondage into wonderful freedom in the kingdom of God.

Many books will accompany this movie. Many sermons can be preached about it. But, the bottom line is that THE PRINCE OF EGYPT is entertainment at its best.

Watch THE PRINCE OF EGYPT: