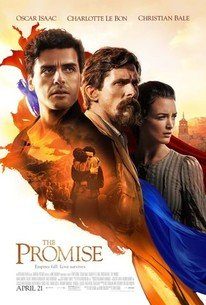 THE PROMISE is a surprisingly fascinating depiction of Turkey’s genocide against Armenian Christians in 1914-15. Mikhail leaves his bride to be in their small village to attend medical school in Constantinople. In Constantinople, Mikhail falls in love with Ana, the beautiful tutor of his uncle’s children, and she with him. However, Ana is already having an affair with an American journalist, Chris Myers, from the Associated Press. As they start to get to acquainted, Turkey aligns with Germany and undertakes to kill off all the non-Muslims aka infidels, including the Armenian Christians. Can anyone survive? Can promises be kept?

THE PROMISE is a very powerful, exciting historical epic. It keeps surprising the audience with new twists, turns and intensified jeopardy. THE PROMISE is full of action movie violence. The bedroom scene diminishes the Christian commitment of the two featured Armenian characters, asa does the woman’s affair with the American reporter. That said, the movie’s positive Christian aspects are overt and pervasive. In the end, Christian heroism and nobility prevail despite terrible tragedy. THE PROMISE elicits compassion, emotion, tears, joy, and victory.

(CCC, BBB, ACAC, RoRo, L, VV, SS, NN, A, D, M) Very strong Christian, moral worldview that includes a clear contrast between the Christian culture of life and the Muslim culture of death, with appeals and prayers to God, people take a stand against tyranny, and there are some strong Romantic elements; three obscenities and four light exclamatory profanities; strong, often intense action and war violence includes some point black shootings, two battle scenes with explosions, man is executed by firing squad, hero comes upon his family and people from his village after being massacred by Turks, including his wife his womb was cut open to kill their baby too, but his mother is still alive, Muslim Turks smash and set fire to Christian stores and beat up hero’s uncle and other people in the street, man being used for slave labor blows up himself and the Turkish soldiers abusing him, man tries to free Christian prisoners on a train but falls into river when train runs across a large bridge, people drown; implied fornication as couple starts to undress and kisses passionately before the movie cuts to them together in bed the next morning and woman in that scene apparently lives with another man; partial upper male and female nudity with exposed nipple; alcohol use; smoking; and, mother lies about her son being dead, man breaks his promise, man clearly still has feelings for another woman after he’s been married, oppression and tyranny by the Turkish Muslims against Christian citizens but strongly rebuked.

THE PROMISE is a surprisingly fascinating depiction of the clash of two civilizations, which results in a horrific genocide.

To put it into context, Armenia was the first Christian country, and its capitol once boasted of a thousand and one churches. Four of the five metropolitan areas of Christendom stretched from North Africa through the middle East to India, with a population so thoroughly civilized by Christianity that Athanasius said in Nicea, a beautiful lakeside city that touched on Armenia, that two janitors could argue theology with more wisdom than trained theologians. Within a few short years, the peaceful civilization of Christendom was devastated by the barbaric killers from the Arabian Peninsula in the name of Islam and the second wave of Islamic killers, who were Turks. Eventually, two-thirds of Christendom were lost to the barbaric genocidal hordes, who subjected the Christian populations, such as the Copts, the Assyrians, the Chaldeans, and Armenians to dhimmitude, second class status.

Even so, when the movie starts, just before the outbreak of World War I, the subjugated Armenians are the lawyers, the successful merchants, the doctors, and the other professionals in Turkey. That’s because, unlike the enforced anti-intellectualism of Islam, Christianity calls Christians to seek wisdom, knowledge and understanding.

Mikhail, a young man in a small Armenian village named Siroun, runs his family’s apothecary shop. Mikhail wants so badly to be a doctor by studying at Constantinople that he allows himself to be betrothed to a woman named Mara for 4,000 gold coins. He takes the coins to enroll in the medical school in Constantinople with a promise to return.

In Constantinople, he sees the incredible opulence, internationalism and decadence of the city, and he falls in love with the tutor, Ana, of his uncle’s children. Ana is already having an affair with an American journalist, Chris Myers, from the Associated Press. As they start to get to know each other, Turkey aligns with Germany to fulfill its goal to kill off all the non-Muslim population aka infidels, including the Armenians, the Assyrians and the Chaldeans.

The Chris, Ana and Mikhail love triangle is interrupted by the violent pogroms, purges and attacks on the Christian Armenians. Chris and Mikhail are captured by the Ottomans but miraculously survive. Mikhail makes it back to his village with Ana and Chris following. Along the way, Chris and Mikhail separately see the horrors of the genocide occurring, which murdered 1.5 million people.

Can anyone survive? Can promises be kept?

THE PROMISE is a very powerful, exciting historical epic because it keeps surprising the audience with new twists, turns and intensified jeopardy. The love story becomes a plot device for reflecting the pain and suffering of the Christian Armenians, and the cruelty of the Ottoman Muslim Turks. Friendly Muslims are killed or purged by devout Muslims. The situation is reminiscent of ISIS today and of Mohammed and his gang in the Seventh Century.

THE PROMISE is full of violence, but it’s action movie violence. The only regrettable part is that the screenwriters don’t prevent the consummation of the love triangle. This diminishes the Christian commitment of the two featured Armenian characters. Actually, the Armenians were very chaste and exhibited the Christian virtues, which is the reason that in the midst of their dhimmitude, they were the revered bankers and merchants. Christianity rewards truth and virtue whereas Islam permits lying, rape, murder, pillage, and plunder as a form of jihad.

That said, the movie’s positive Christian aspects are overt and pervasive and, in some ways, more alive and intense than the Orthodox culture actually was. In the end, heroism and nobility prevail despite terrible tragedy. The good news is that THE PROMISE shows a Protestant minister with great faith who rescues the Armenians. The better news is that THE PROMISE elicits compassion, emotion, tears, joy, and victory.