THE RESURRECTION OF GAVIN STONE 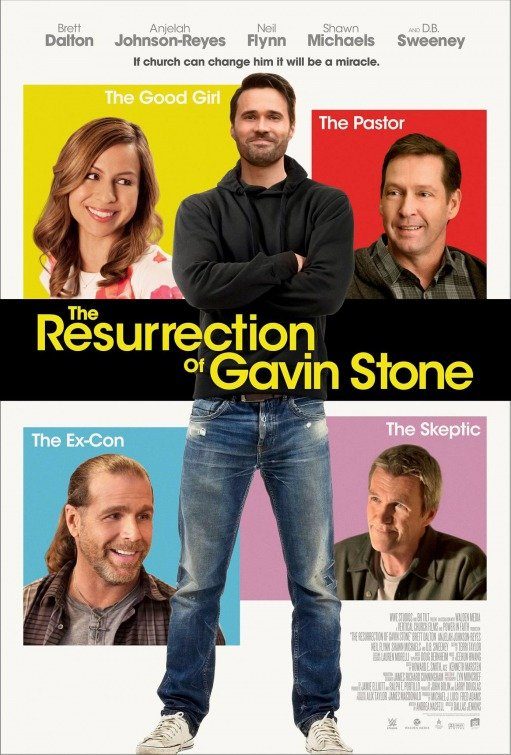 THE RESURRECTION OF GAVIN STONE is an entertaining redemption story about a washed-up child actor who pretends to be a Christian so he can play Jesus in the upcoming Easter Passion Play. As Gavin gets to know the members at the church, he falls for the pastor’s daughter, rethinks his assumptions about Christians and realizes he may need some grace in his life. However, when his old party life comes back to haunt him, Gavin must choose between his new community and the role of a lifetime. This complication causes Gavin to finally decide what he believes.

THE RESURRECTION OF GAVIN STONE isn’t technically or artistically perfect. Nor does it really break any new ground. However, it ultimately delivers many laughs without the preachy or cheesy moments moviegoers might find in other independent, faith-based movies. Some of the humor pokes fun at some church stereotypes. This is meant to be all in good fun, though some of it could offend more sensitive viewers. Overall, however, THE RESURRECTION OF GAVIN STONE is clean, wholesome, inspiring entertainment with a terrific message of grace.

(CCC, BBB, FR, V, N, A, M) Very strong Christian, moral worldview including gospel witness, forgiveness, grace, and conversion to faith, plus protagonist’s conversion involves comical examples of mocking and/or not understanding elements of Christian faith, a scene of improperly taking communion or jokes about “Jesus Christ – Superstar” are intended for comedy but may offend more sensitive audience members; no foul language; the Passion play includes a depiction of the crucifixion where protagonist has blood on his head and upper body; no sexual content; upper male nudity when protagonist’s shirt is off as he cleans the blood off of him; protagonist mentions several times throughout movie he’s sober but is tempted to drink an alcoholic drink at the end of the movie; no depiction of smoking or drugs, but a wild party and protagonist’s drug-ridden past are mentioned several times; and some miscellaneous immorality when protagonist lies to the church in order to play Jesus (spoiler: he later comes clean and receives grace and forgiveness).

THE RESURRECTION OF GAVIN STONE is an entertaining redemption story about a washed-up child actor, who pretends to be a Christian so he can play Jesus in the upcoming Easter Passion Play. As Gavin gets to know the members at the church, he falls for the pastor’s daughter, rethinks his assumptions about Christians and realizes he may need some grace in his life.

The movie begins with an “E! True Hollywood Story” style news report about Gavin Stone (Brett Dalton), who was once a famous child actor in Hollywood but is now just a washed-up partier. The latest party in his Midwestern hometown got way out of hand, and now Gavin must serve 200 hours of community service at a local megachurch before he’s able to leave the state.

After a day of washing bathrooms and mopping floors, Gavin stumbles upon the auditions for the church’s Passion Play, directed by Kelly Richardson (Anjelah Johnson-Reyes), the Pastor’s daughter. When Gavin learns that only born again Christians are allowed to participate in the play, he pretends to be a Christian in order to play Jesus and fulfill his community service hours.

At first, Gavin thinks it will be easy to play Jesus on stage, and a Christian off-stage. As he becomes more and more involved with the church, however, he realizes that Christians aren’t what he thought they were. He develops an attraction to Kelly even though she consistently turns him down and remains skeptical about his character. He joins a men’s bible study with an unlikely group of Christian guys, gains the trust of the senior pastor (D.B. Sweeney) and tries to mend his relationship with his father (Neil Flynn).

As Gavin butts heads with Kelly about the direction of the play, she urges him to “research his role” and learn more about the character of Jesus. However, when his old party life comes back to haunt him, Gavin must choose between his new community and the role of a lifetime, causing him to finally decide what he believes.

THE RESURRECTION OF GAVIN STONE is a fun comedy that faith-based audiences will find refreshing and entertaining. If the title doesn’t give it away, the story itself is rather predictable as a classic conversion, prodigal son type of story. However, the movie has enough fun along the way for most audiences to enjoy the journey. Much of the humor involves inside jokes about church or theology, or Gavin’s assumptions about how Christians behave, so this movie probably will play best to various Christian audiences looking for a fun, clean story that highlights grace and the character of Jesus. What is most refreshing about the movie is its down to earth characters and lack of “preachy” dialogue. Gavin’s “resurrection” is caused by the way he’s treated by the characters around him. At no point in the movie does anyone have to share the Gospel with him, but rather, by being shown grace, Gavin learns the power of redemption through Christ. The character of Kelly is a particularly good example of the idea of preaching Jesus through actions rather than words.

Much of the movie’s humor pokes fun at some church traditions and allows the audience to see the world of the church through Gavin’s eyes. While some of the scenes that involve Gavin making fun of Christians, or improperly taking communion, might border on being offensive, they are mostly in good fun. This will depend on the sensitivities of the viewer.

All that said, the movie does fall a little short on a few levels. While most of the characters are down to earth, they become caricatures of themselves. Gavin plays the stereotypical bad boy lost in church. The three church guys who invite Gavin to Bible study are also fairly stereotypical and become more comic relief than actual people. Stereotypes aren’t always bad, though, because they can offer viewers a quick shorthand to enjoy a movie’s plot, story formula and content.

THE RESURRECTION OF GAVIN STONE isn’t breaking any new ground, but it ultimately delivers many laughs without a lot of the preachy or cheesy moments one might find in other independent, faith-based movies. It’s good, clean fun with a terrific, inspiring message that many audiences will enjoy.

Watch THE RESURRECTION OF GAVIN STONE: